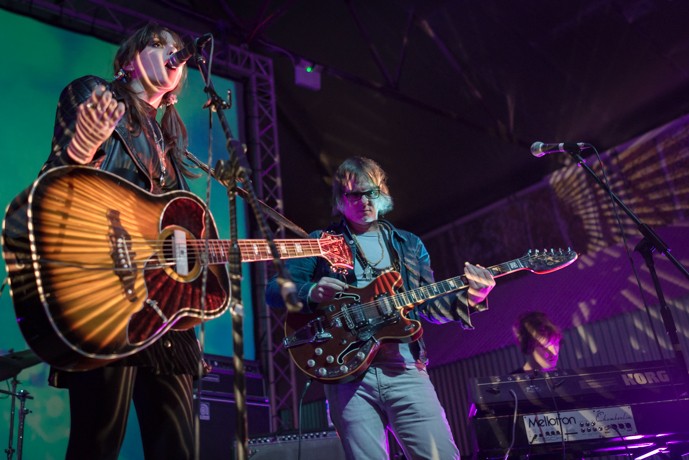 As Canadian singer and songwriter Tess Parks tours her new album, she chats to Getintothis’ Cath Holland about everything from Oasis to efficient laundry tips.

Toronto-born Parks comes from a music loving family, but it was discovering Oasis at the age of six that had a massive game changing impact.  ‘I guess the age I was at when I first heard them it left an impression on me and… their songs are just so positive and I love the whole attitude behind it,’ she says.

At eleven years old she saw the Manchester group play live in Canada and afterward begged her parents to get her a guitar. With the help of Oasis guitar chord books, she learned how to play and even to this day, ‘I pretty much only use the chords Oasis use…it helps me write songs.’

Tess moved to London in her late teens to study photography, an ongoing passion. Former Creation Records boss McGee picked up on her unique vocals and songwriting talent, but it was after meeting Newcombe she realised her potential more fully. Her albums with the latter are recorded in his Berlin studio and released on his label A Recordings.

She has just completed a tour of America and Europe.

Her live band includes Ruari Meehan who co-wrote Right On, from the new release, and who also collaborated on the videos for singles Please Never Die, and French Monday Afternoon. The pair are working together on a forthcoming record.

This week, Tess hits the road again, playing dates around the UK.

Getintothis: You and your band made quite an impression around Europe these last couple of weeks. The response was fantastic.

It was really good though… Most of the shows sold out… It was overwhelming, I’m still trying to process it. Thinking what am I doing, touring in the middle of Switzerland a sold out show… it blows my mind.

On this tour I haven’t been playing guitar as much. I really enjoy singing…I sing better when I’m not focusing on not fucking up when I’m playing guitar!’

Getintothis: Can you tell me how your family background influenced your love of music and your music making? Your father plays piano, is that right?

‘My grandfather was a professional pianist. He started playing piano when he was three. My dad as a result learned piano at a young age… (and) he introduced me to all the music I eventually ended up loving, like Oasis and Led Zeppelin. He was offered to be in The Guess Who – he grew up in Winnipeg – when he was 17… but my grandfather was no, you have to go to school, don’t be a musician.

But my parents are very supportive (of me). My dad always says he’s living vicariously through me.’

Getintothis: In the video for Please Never Die from the new record you’re wearing a Liam Gallagher t-shirt. It’s amazing that a band from Manchester so many miles away from where you grew up have seeped so deeply into your consciousness.

‘It is a funny thing for a six year old girl to be obsessed with Oasis or whatever…it’s weird… I got bullied for my music tastes at camp and in school.’

Getintothis: But you stuck to your guns.

Getintothis: Tell me about your transition from Brian Jonestown Massacre fan to collaborator with Anton Newcombe, and how that relationship changed.

‘’…when I was younger I was a fan (of bands). I would go to the radio station in Toronto where you could go and get an autograph and a picture and just walk in and watch the live radio interview and live session…I was a fanatic, I’d wait outside gigs and ask bands if I could watch the soundcheck, just a megafan. And I wish I still kind of had that really excited fire in me… but it’s one of those things that fades away. But when I’m reminded of like the friends I’ve made and how much I love and idolize what they do, it is very cool.

I guess you just get used to it people are just people and you get to know them and…  I’ve had people even come up to me and ask for an autograph and I’m, really? It’s a weird thing, y’know. Because it’s that weird shift… I don’t know how to explain it… people come up to you after a show they say like wow, your music changed my life or whatever…’

Getintothis: And how has your songwriting changed since you started working with Anton, do you think?

‘I think one thing he taught me was, I was writing a lot of songs in the first person, I’d say “I” a lot…I personally don’t think it’s such a bad thing. Like if it’s too much, I get it, but as a listener, you can put yourself in the position of the “I”.

But he said to me “y’know, just change it to you, like you are a star rather than I’m a star. Tonight I’m a rock n roll star could be tonight you’re a rock n roll star”. And then it’s all inclusive in a way. I think I’ve been more cautious of that…sometimes less is more.

I’ve been writing a lot recently again which is great. A lot of poems that will eventually turn into songs.’

50 per cent of new guitarists are women – She Drew The Gun, Girl Ray and Adwaith discuss why

Getintothis: Listening to your first solo record and these two collaborative records, your voice is clearer and louder now, more confident, higher up in the mix. There is so much more authority in your singing and Anton’s guitar and arrangements underneath so melodic. It’s almost like you and he are reversing gender stereotypes, in a way.

‘I think that was always the idea. He heard my first record and said, you know, like your voice needs to sit on top of the music. It needs to be a platform for you to showcase your words and your voice. And I’m very grateful for that.

I used to drench my voice in reverb in early home recordings even on Garageband and I’d try to mask what I was singing about how I sounded, but again as you get older you become more comfortable with yourself and I’m glad I’ve come around to who I am basically.’

Getintothis: Your voice is distinctive, raw, dark. Very much in the tradition of uncompromising women singers like Patti Smith, Marianne Faithfull…

‘When I was in school I was in choir and the choir teacher always made me an alto and I was, no I’m a soprano, I can sing high too. But I guess I was trained from a young age to force myself to go lower than was comfortable.

My mom reminded me recently the way I used to scream before shows so that my voice would get raspy and…I don’t do that anymore.’

Getintothis: You don’t need to.

Getintothis: Tess Parks and Anton Newcombe is an album listeners can lose themselves in. Was that your intention when you were making it?

‘I’m really proud of it. Those songs were really important to me… Anton and our engineer Andrea Wright – she’s from Liverpool… they two together work really really well. She’s very patient, if there’s another vocal take. If I’ve kept on singing maybe an off note and we try it over and over until I got it.

It was a weird time. It was February last year when we started recording it and my aunt passed away eight days after I got to Berlin on Valentine’s Day so I went home for her funeral and then came back and finished the record.

It’s very much an ode to her and I was in a really raw place…a lot of themes on the record, like life and death and rebirth. I’d love to learn how to write a happy love song.’

Getintothis: Aren’t there too many of those in the world already?

‘Actually, Talking About The Weather… it’s a beautiful love song… I can’t take credit for that, Anton wrote that, I guess almost 4 years ago now. (he said) “you need to sing a ballad, sing a beautiful…y’know …make people cry”

I think (the album) takes you on a journey, like all good records should. Hopefully.’

Getintothis: Why did you go with an eponymous title for it?

I Declare Nothing was a statement in a similar vein. We had nothing to declare in the first place so why not just call it nothing but our names.’

Getintothis: The videos to go with singles from the album are so vivid. The Life After Youth one is very distinctive, you and your friends doing a tribute to rural horror films from 60s, and the use of black and white film.

‘There’s a photo of the Velvet Underground and Nico and Andy Warhol, and she is wearing a white suit and everyone else is in black…I love that. I used to only wear black for years and I think I’m wearing white in all of the music videos.’

Getintothis: I was going to ask how the hell you keep your whites so white…

‘I love it. I still take photos all the time. Not so much on my film camera as much as I used to. That said, I took 13 rolls of film in California.

I was shooting a lot of bands, taking a lot of portraits of friends before I started releasing records. I always document travels and I kind of got lazy, I use my phone a lot and it’s not the same. I really need to make more of an effort. I use my grandfather’s camera as well, it’s really nice to carry that with me and look through a lens that he also looked through. I always take photos, I need to document things.

Getintothis: Documenting your life with photography as well as words?

‘It’s amazing to be immortalised especially on the internet. If you have a website or a blog unless the internet crashes and burns you’re immortalised, and whatever you create and put out there can exist forever.

And I think that’s really nice.’