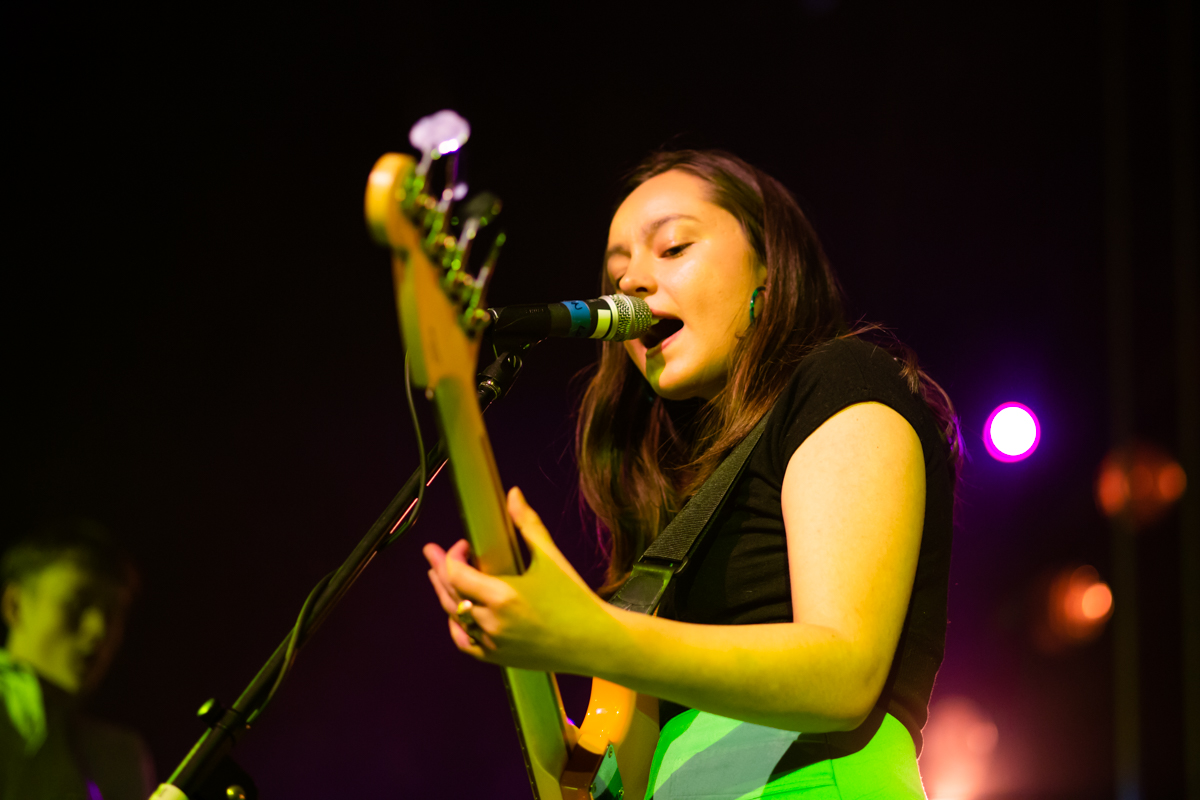 The Orielles pitched their ever increasing stock to Liverpool’s Invisible Wind Factory on a cold and windy night, but Getintothis’ Matthew Loughlin-Day braved the elements to see it all unfold.

Momentum can be a difficult thing to quantify.

Bands can practice for hours in cold, damp rehearsal rooms, honing their craft by touring the toilet circuit, playing to no-one in a backroom in Telford, splashing all their funds on recording sessions, but if they don’t have that intangible spark of energy surrounding them, then it’s unlikely to count for much. Coming to the end of 2018 however, it’s safe to say The Orielles are very much a band with momentum behind them.

Topping off a stellar year, which saw them release their (excellent) debut album ‘Silver Dollar Moment’, tour the world and be drafted in for a certain Bill Ryder-Jones’ latest LP, they arrive in Liverpool with little to prove and everything to celebrate.

But before all that, initiating proceedings, Three From Above grace the stage. Opener ‘Paracetamol’ brings to mind the jagged psych of Wu Lyf, held together by Lewis McWilliam’s excellent polyrhythmic drumming, although it appears somewhat of a red herring, as the rest of set follows a rather different course, with songs addressing Brexit, mental health and, er, Goran Ivanišević, charting the waters of 80’s Matchbox B-Line Disaster, Biffy Clyro and a host of other acts outside of this writer’s usual reference points.

Singer Tom Collins is keen to engage in audience participation and in very much a bring-the-mountain-to-Mohammed effort, clambers off stage several times to try and encourage more distant punters nearer the stage. Likewise, closing number ‘Na Na Na’ is capped off by the frontman again venturing into the crowd with an attempt to whip up a singalong to the song’s monosyllabic refrain. Ambitious, if nothing else, for an opening act and you can only salute his efforts.

Next up is Brad Stank. To call this a side-project of Trudy and the Romance’s stickman would be doing him and the rest of the band a disservice, as there is nothing throwaway or part-time about this outfit. Mac de Marco grooves and phaser-heavy guitar tones feature heavily in a set so laid back it could almost be mistaken for the horizon. Nothing is rushed, everything is hushed.

When main man Brad Mullins states after three songs that the band are going to “slow things down”, you can barely believe this could be possible, yet sure enough, us doubting Thomases are soon bathed in a sea of Shuggie Otis licks and major 7th and minor 6th chords, so languid as to be nearly narcotic.

Amidst this is Mullins’ Gil Scott-Heron-meets-Bill Callahan baritone voice that details tales of longing and lust in a manner that doesn’t sound leering or creepy, but rather yearning and soothing. Reverb-laden drums push things along and guitars wail in a manner that, in the wrong hands, could veer into ‘smooth Jazz’ territory, but mercifully, we’re on safe terrain here and things stay tasteful and slick.

At times, the set feels somewhat too restrained and there is a niggling urge for things to step up, if only a little. This itch is nearly scratched by the climax of the closing song, but this is a minor quibble and by the time the band leave the stage, the growing crowd are keen to show their love. Given the aural seduction they’ve just been subjected to, it’d be hard not to.

This writer would bet his life savings (and everyone else’s) that the term ‘aural seduction’ has never been used in a SPILT review. Their sound is a claustrophobic, disjointed onslaught, fuelled by the manic, fried antics of frontman Mo that could easily soundtrack a Fat White Family Boxing Day comedown.

Elements of The Fall and even early ‘Generation Terrorist’-era Manic Street Preachers fight their way through the chaos and naturally, before long, the singer has disrobed and is machine gunning the crowd with his guitar.

Things aren’t exactly subtle (song ‘1984’ for instance features the refrain “War is Peace/Freedom is Slavery/Ignorance is Strength” while other songs host lyrics about the singer’s balls being sucked, in between frantic yelps and “Oi”-ing), but that’s hardly the point here – chinstroking music, this ain’t. Although the onstage theatrics and high energy levels are undeniably entertaining and at times exhilarating, one wonders how far it can go; indeed, the standout moment of the set comes towards the end when antics are toned down and the music is allowed space to, if not breathe, at least catch a gasp of breath.

A sprawling instrumental song (no names, sorry!) drifts into Godspeed You! Black Emperor territory and the band create a huge and complex sound that belies the fact there’s only three of them. A few more short, sharp shocks to the system, and they’re gone again. “Might see you later, might not, don’t care” we’re informed by Mo who vanishes into the night as quickly as he arrived.

After being given chance to catch our own breath, returning heroes The Orielles soon take the stage to the strains of Buzzcocks ‘What Do I Get?’ in a nice homage to recently departed Pete Shelley, greeted by a welcome they richly deserve. They are clearly keen to throw themselves into the thick of it and in opening with ‘Old Stuff, New Stuff’, guitarist Henry Wade and keysman Alex Stephens start as they mean to go on, joyously leaping in time to the pulsating beat of the drum and bass sister combo of Sid and Esmé Hand-Halford, exuding such excitement that even a pilled-up Tigger might struggle to keep up with them.

In fact, Wade’s energy is too much to take for his guitar during this first song and a deft swap is required, but such is the momentum (that word again…) behind the band, it matters little. Indeed, it’s this energy from the band that gets them through a number of technical difficulties tonight, so much so that any mishaps fail to detract from the set and are only noticed when pointed out by the band themselves.

In describing The Orielles, it would be easy to employ terms such as ‘Slacker-Pop’, though that would fall short of doing the band justice, as although songs may superficially deal with somewhat mundane subjects (‘Blue Suitcase’ we were told is about, er, a blue suitcase…), the intricacies of their sound, such as intermittent cowbells, whistles and shakers make already colourful music that much more vibrant highlighting a musicality perhaps not immediately evident when dealing with songs about buying a bottle because it had a nice label (‘I Only Bought it for the Bottle’).

The recent addition of Alex Stephens on keys and percussion to live shows allow these smaller details to come further to the forefront on songs like ‘48%’, ‘Let Your Dogtooth Grow’ and ‘Henry’s Pocket’, in which they simultaneously complement and lift the Bilinda Butcher-like tones of singer Esmé’s vocals, which could easily be drowned out if this were a straightforward barrage of danceable rhythms and frenetic guitar.

Things are stretched out even further when album highlight (for this writer at least) ‘Liminal Spaces’ gives us and the band brief respite. A swooning, woozy dream of a song, recalling Cocteau Twins and Kate Bush, the band explained in the liner notes to ‘Silver Dollar Moment’ “if you feel as though you exist within the in between, then perhaps you are in a liminal space” and for these three minutes, thanks to Wades’ Johnny Marr-esque guitar and swooning keys, we’re all very much floating in space.

The Orielles @ The Invisible Wind Factory (Liverpool).
Gig number 100 of the year (including a long illness hiatus).
Absolutely brilliant! pic.twitter.com/qb3NHo6GNf

A band in ascendancy, The Orielles still have edges to smooth down and polish, yet for now, that’s half the fun. Theirs is a sound of the sheer joy of being alive and being young.

New song ‘Bobbi’s Second World’ and an as-yet unreleased track point towards an increasingly formidable future, with influences of Stereolab and Tom Tom Club very much on show, but not so much as to obscure their own expression.

Come set closer ‘Sugar Tastes Like Salt’ (the greatest indie disco anthem we never danced to in the 00’s), it’s not just the band who can’t stay still and as the extended coda jumps from rhythm to rhythm, it’s as breath-taking as it is sheer fun.

The future might well be theirs for the taking, and with momentum behind them, only a fool would deny. 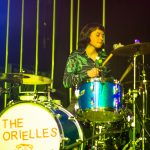 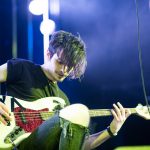 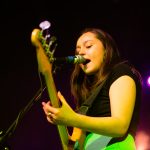 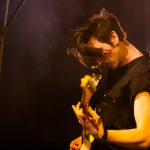 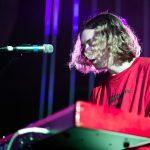 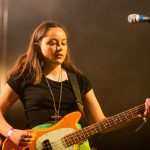 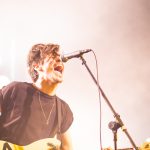 Three From Above – Photographer: Peter Goodbody 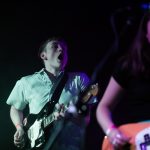 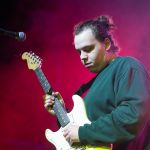 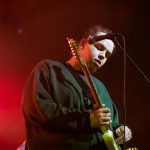 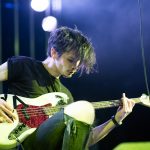 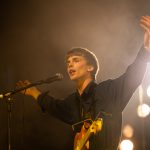 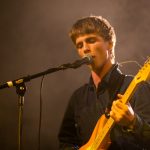 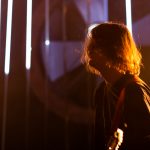 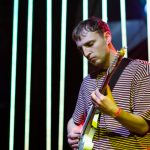