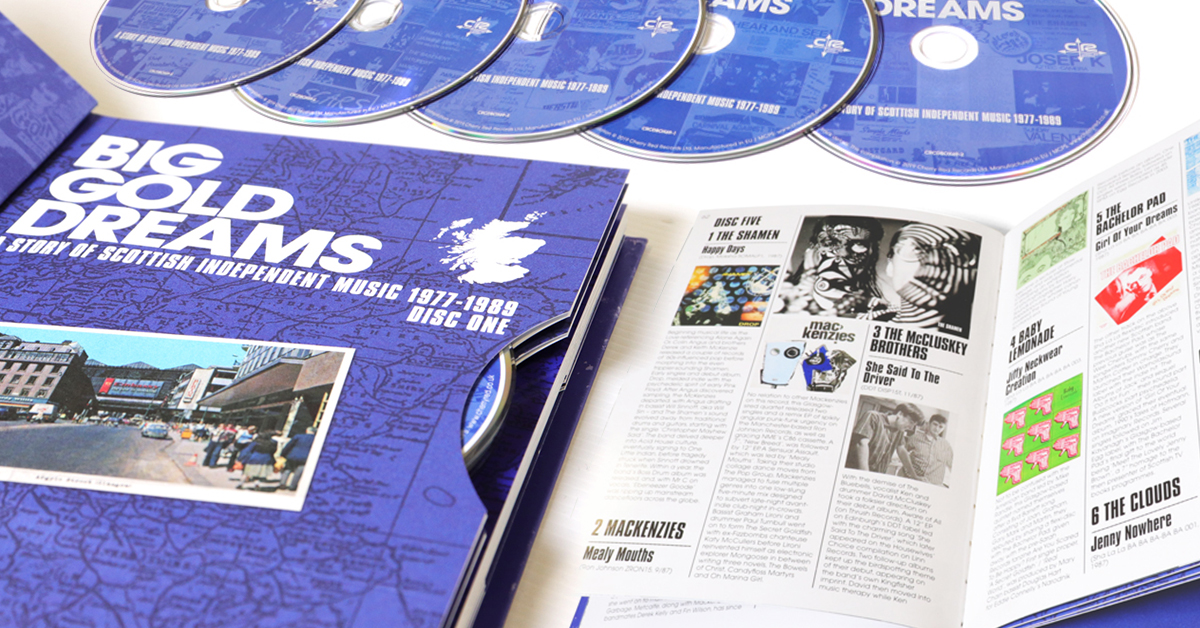 One of the men, Alan Horne is determined to meet DJ John Peel and thrust into his hand the debut single of a band he has dubbed ‘The Sound of Young Scotland’.

Moments later Peel is in possession of Falling and Laughing by Orange Juice, the group led by Horne’s companion, Edwyn Collins, but not after the shocked DJ has been told ”All those Manchester and Liverpool bands you play. It’s all a nice bore.

“You need to wise up, old man. Forget all that Bunnymen and Teardrops shit. This is the future. Get wise to it now or you’re going to look really stupid.”

The very next day, Peel plays the song on his show, recalling how he’d been confronted by “a horrible, truculent youth” the night before, and in doing so launches a sound and aesthetic that would dominate what we now know as ‘indie music’ for ever more.

It’s a neat story of course but one which also sums up the ambition, eccentricity and sheer chutzpah of over a decade of Scottish independent music which is covered on a lavish new 5CD box set which focuses on an incredibly fertile period when this nation of just 5.3m came to birth some of alternative music’s defining moments.

Laid out in chronological order, Disc One shows how punk proved problematic for Scotland. Faced with violence and stringent licensing laws, the music scene in Glasgow struggled and while the punk explosion inspired many, very few released anything of much worth.

With apologies to the likes of the Exile, the Drive and the Valves, it’s 15 songs in until we’re presented with something different: a song called Chelsea Girl whose combination of Roxy Music, Bowie and Velvets is only made more astonishing by the fact it’s Simple Minds’ second single.

Quite how this is by the same band who recorded Belfast Child 10 years later is anyone’s guess.

From then on the collection is a blast. Disc Two starts with the sublime but scary Clare Grogan chirping about Dead Pop Stars on an uncharacteristically gothic number from Altered Images before we’re introduced to one of Scotland’s most individual talents in the Associates’ Billy MacKenzie whose operatic croon on Tell Me Easter’s On Friday still sounds like nothing before or since.

Edinburgh’s Josef K quickly follow with the self-deprecating Sorry For Laughing and it quickly comes apparent here’s another band with boundless originality whose fusing of post-punk guitars with funk and disco rhythms reached the top of the charts 25 years later when it was repackaged by Franz Ferdinand.

Disc Three is where the heavyweights come in. The Cocteau Twins invent shoegazing with 1982’s Feathers, Oars, Blade before the Waterboys, the Bluebells, Strawberry Switchblade, Aztec Camera and the Jesus and Mary Chain rush through the doors of what briefly resembles the best Top of the Pops ever.

JAMC’s extraordinary debut single for instance still feels like a feedback-ridden line in the sand not least because so much of the rest of the third disc is made up of their Creation Records protégés in the form of Revolving Paint Dream, Jasmine Minks (the brilliant Think!), The Pastels and label boss Alan MacGee’s own band Biff Bang Pow on the sublime psych pop of There Must Be A Better Life.

More Creation comes on Disc Four with the first appearance of Primal Scream with All Fall Down – a record that is about as weedy as something like 1999’s Accelerator is visceral.

Crisis in music education: heading to a preserve of the affluent and well-heeled?

Indeed as the disc reveals, Bobby Gillespie wasn’t the only one to go through a latter day damascene conversion: witness the Soup Dragons in all their C86 glory with the janglesome Whole Wide World a whole four years before the dance beats of I’m Free or the presence of Shirley Manson on Goodbye Mr Mackenzie’s keening and earnest The Rattler which is a long way from the dark electro pop of Garbage.

Elsewhere the BMX Bandits impress with the lovely Strawberry Sunday and The Thanes produce a wonderful Nuggets-style slice of garage rock on Hey Girl (Look What You’ve Done).

After Disc Four’s brilliance, the final set of songs can’t help but feel something of comedown despite The Shamen giving early notice of the pop nous that would one day take them to number one on Happy Days or The Vaselines showing just why Kurt Cobain declared them his favourite band on the buzz saw pop brilliance of Teenage Superstars.

By 1989, the likes of Teenage Fanclub and a remixed Primal Scream were just a few years before huge break through success with the likes of Belle and Sebastian, The Delgados, Mogwai, the Beta Band, Franz Ferdinand and Travis all to follow them into the charts over the next decade.

But this is where it started and over these 115 tracks it’s all in here from the sublime to the ridiculous.

Nae bad. Nae bad at all.