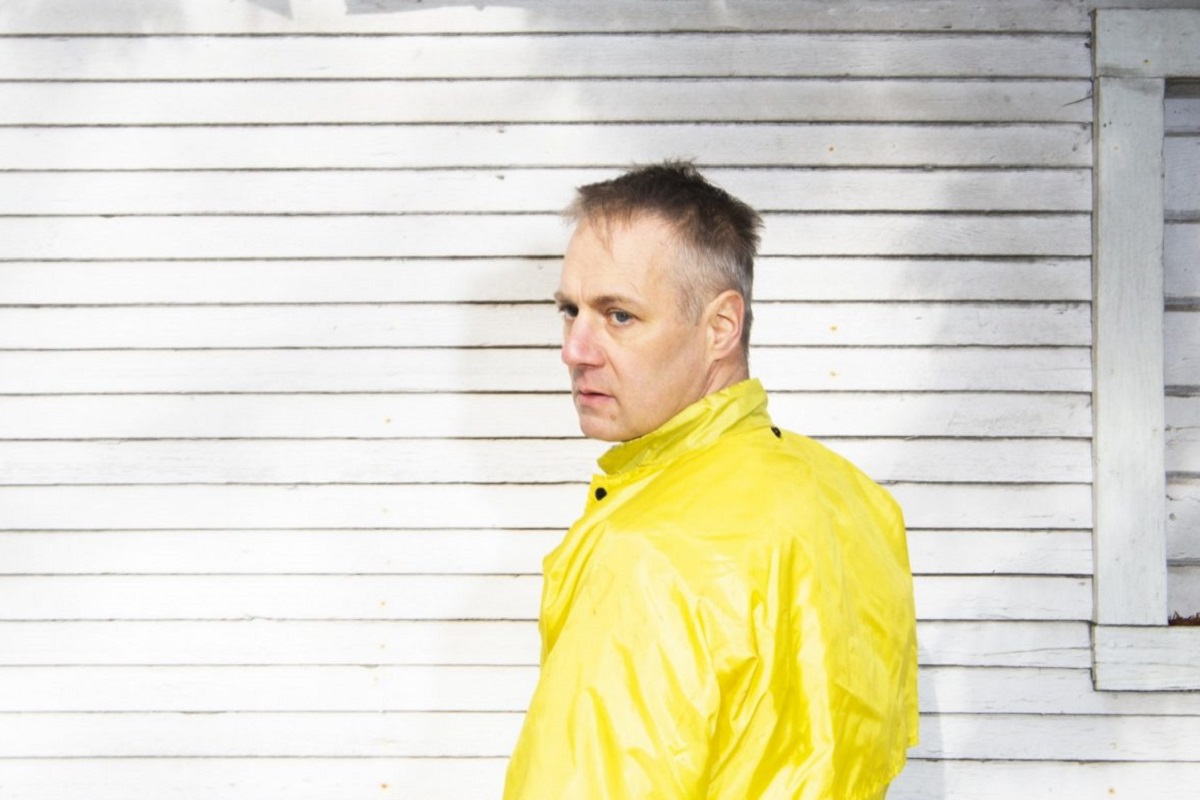 As Calvin Johnson tours the UK in a series of rare solo intimate shows, he chats to Getintothis’ Cath Holland about working with The Black Keys’ Patrick Carney on his new record.

He’s a musician, producer and songwriter, but also founder of K Records, which in 1980s laid out the blueprint for DIY labels across the Atlantic. And in doing so expanded the very boundaries and depths of indie rock.

Based in Olympia, Washington, was launched by Calvin with the intention of making friends music available to all, but as its reputation blossomed it came to release work from not only his own outfit Beat Happening – formed with Heather Lewis and Bret Lunsford – but a pretty damn amazing array of artists and records on top.

These include Beck‘s One Foot In The Grave, Modest Mouse, Teenage Fanclub, Melvins, Bikini Kill and loads more.

Connections with the burgeoning UK indie scene strong due to a shared aesthetic, Johnson and The Pastels were mutually supportive, the latter distributing Beat Happening in the UK. And there was a live cassette with Beat Happening and The Vaselines.

Hole, Nothing Painted Blue and, closer to home Los Campesinos!, have all recorded songs with references to K Records.

Kurt Cobain played guitar on Bikini Twilight, with Johnson and Bikini Kill’s Tobi Vail, released as The Go Team. Cobain’s famous ‘K’ tattoo in tribute to the label is well known and intended to ‘try and remind me to stay a child’.

Nirvana’s Lounge Act on Nevermind refers to the tattoo in the line, ‘I’ll arrest myself and wear a shield.’

So yes, K Records’ history is an impressive one. Johnson could name drop forever if he wanted to, but he does no such thing when he calls me from New Orleans. He’s there touring solo album A Wonderful Beast before coming over the UK to play further dates.

As a massive radio enthusiast, he confesses early on in our chat at getting a real kick listening to the stations on the AM waveband while he’s in the South. From the religious to the agriculture-oriented, there’s hidden treasures to enjoy as he travels.>

‘What….is beautiful about (radio) is that it’s limited in its scope in terms of geography. That gives the radio a  regional perspective, in the united states there’s a limit on the size a station can be, they’re regulated by the government…the FCC’s original charter…says that radio needs to serve its region, its geographical area, the people in that region. Radio is the voice that does it best, meets that charge the best in terms,’

He caught the radio bug as a teenager after volunteering for a college station.

‘Radio is that it is a technology that is directly free. You just need access to a radio which technically you could build yourself out of a couple of tin cans and some hanging wire.’

That belief system is something he’s held since the early days of the label and when in Beat Happening, spearheading lo-fi recording, eschewing sophistication, embracing instead a back to basics DIY approach to both recording and musicianship.

Having said that, Beat Happening‘s twee-ness was misleading; more than an even superficial listen notes oddities and eccentricities underneath the simplicity of the instrumentation, childlike lyrics and doodled artwork. Those uneasy elements are very much part of Calvin’s solo work today

Not about to rest on past glories, K Records continues (though he admits ‘It’s never easy’) and releases music from newer artists like Spanish musician Aries, Olympia’s See Now and Know, in addition to Johnson himself.

Last year’s A Wonderful Beast is a Calvin Johnson solo record but made in collaboration with The Black Keys’ Patrick Carney, also on production duties.

On the press release for the record, we’re told ‘Rock n roll will never die’ and whilst that’s perfectly true, one can’t help but wonder why that of all things inspired the album…

‘You coming from Liverpool, you probably know that better than I do,’ he jokes.

‘We were really song oriented…our inspirations are the same as rock n roll has always been, like Carole King or Ray Charles or Buddy Holly or whoever, the great songwriters…Chuck Berry, Bo Diddley these are the people who created the template. It’s the idea, let’s write some great songs. That’s what we were aiming towards.’

Songs From Under the Floorboards: strange noises from across the years

I’m very taken with the idea you used the Brill Building concept to bounce off. There’s visions of you guys in a room, with a piano in shirts and ties and working nine to five in a dusty room…

‘With a pencil and a pad?’ he laughs.

Pencil firmly behind the ear.

‘The room was a little bit bigger and instead of a piano there was about 30 different weird keyboards from the last 40 or 50 years. Patrick had a lot of fun, every song he was, ‘oh I know the one for this’ and he’d pick another keyboard. He never used the same keyboard on two songs.’

It does sound like the pair enjoyed making the record. There’s so much wit in there.

On single Like You Do, he sings ‘Loving me like you do…it must feel good…write a book about it’.

It’s an album with songwriting at its core, just as he says, but there’s no ignoring the sinister undertones, Calvin’s familiar baritone unsettling. The childlike elements from the past, show themselves; Little Red Riding Hood’s fairy tale foe stalks the title track.

The pair met a few years ago and kept in touch, and it was Carney‘s suggestion ‘I’ve got some time off, do you want to do some recording’ which led – eventually – to Calvin travelling to Nashville where Patrick was living at that time. They recorded in a studio above his garage, getting together with ‘only the belief that music can ooze from the savage breast’ – good Lord – and pulled in Michelle Branch to provide vocal harmonies on some of the songs.

Calvin’s said before that collaborations ‘beats working for a living’, but there must be something else that appeals, I suggest.

‘With Patrick for instance, he can fill in the parts that I’m missing and he has ideas and I have ideas, but I think part of the collaboration process is trust and so if he has an idea, I trust it.

And give it a try and see how it goes. Try not to have any pre-conceived ‘oh that’s not going to work’ but think ‘Patrick thinks this is a good idea, so let’s try it, see what happens.’

That DIY aspect to how K Records operates, endures. Streaming is DIY in its own way – anyone can put music online and its there and ready to listen to, no gatekeepers to confuse things.

‘If the goal is to make music available to people who choose to appreciate it, then streaming more than meets that goal. It’s an amazing ability for new music to be available…almost immediately, as you’re making it. That’s wonderful…if all you care about is getting the music out to people, then that’s great. It works, it works better than it ever has. And it makes the music accessible to anyone all over the world.’

I sense there’s a ‘but’ in there somewhere, and physical releases are still a focus for the label. Releasing music on cassette was part of the label’s identity in its early years and recent times have seen more of a return to the format. Not for any novelty value, but because artists and fans like it. And A Wonderful Beast is out on cassette as well.

‘We’ve been making cassettes on and off over the years but for the last 10 years we’ve tried to make the LPs available on cassette as well. Mostly because the artist themselves ask for it ‘oh we want albums on cassette because we go on tour and sell our album and people ask for cassettes’ so there is some sort of demand. We feel that if you are interested in our music, then we’d like to make it available to you. We’re trying to meet that need.’

When he hits the UK this week, he’ll be flying solo, and acoustic. It’s the first time he’s played Liverpool in about a decade or so

‘When the album came out I did a 7 week tour of the US with the band and it was really fun. They were great, really good players and we got along really well. But its difficult to travel overseas with the band and make it work financially.’

Being a part of music history and more importantly, a significant edging forward of change is an appeal of K Records and Beat Happening from a personal perspective, challenging gender stereotyping within rock and punk. Tearing up the rule book back in the 1980s in relation to rock and gender code stereotypes, welcoming women into the world of punk rock and indie without inflicting weary tropes to appearance and behavior.

‘I feel fortunate to have been in Olympia when I started making music, and I was very interested in working with women, and the work that women had done in the past. Musically some of my biggest influences were Betty Everett and Nancy Sinatra, and so those were things that really were in the back of my mind,’ he says.

‘And in Olympia, there were women that were involved in music back when I started actually making music there were a few people around not a lot, but a few and I think the men who were making music took them as seriously… everyone was viewed as legitimate. I think that was part of what made Olympia special that there was a real acceptance of people’s creative identity wherever they were coming from. ‘Oh – do you believe in yourself, we believe in you too.’ That crossed over to gender identities.’

The Sam Knee book about the UK indie scene in 1980’s, A Scene In Between, came out in 2013, merely flicking through it it’s inspiring how many women were in indie bands back then. Not as up front eye candy but drummers, bass players…then Britpop happened and they vanished. It went 100% lad. Did that happen in the US as well?

‘Oh, it’s always happening. It’s annoying. That is the default model for people and bloke rock, guy rock bands is the default mode… and I feel like that’s not the way it should be. In Olympia we’ve always had women involved in music on every level and more and more so all the time.

But I understand what you’re saying the dude rock thing (reoccurs) on a regular basis.’

Calvin’s been referred to as a ‘character’ many times over the years and before I let him go and our conversation ends, I can’t help but ask how he feels about that.

‘So I haven’t heard that lately, but sure, why not. It’s great,’ says Calvin drily.

‘There’s no such thing as bad publicity is one thought. The other thing is, it doesn’t matter what they say as long as they spell your name right.

As long as they spell my name right, that’s all that matters.’

Calvin Johnson tours the UK over the next fortnight. The tour dates are: