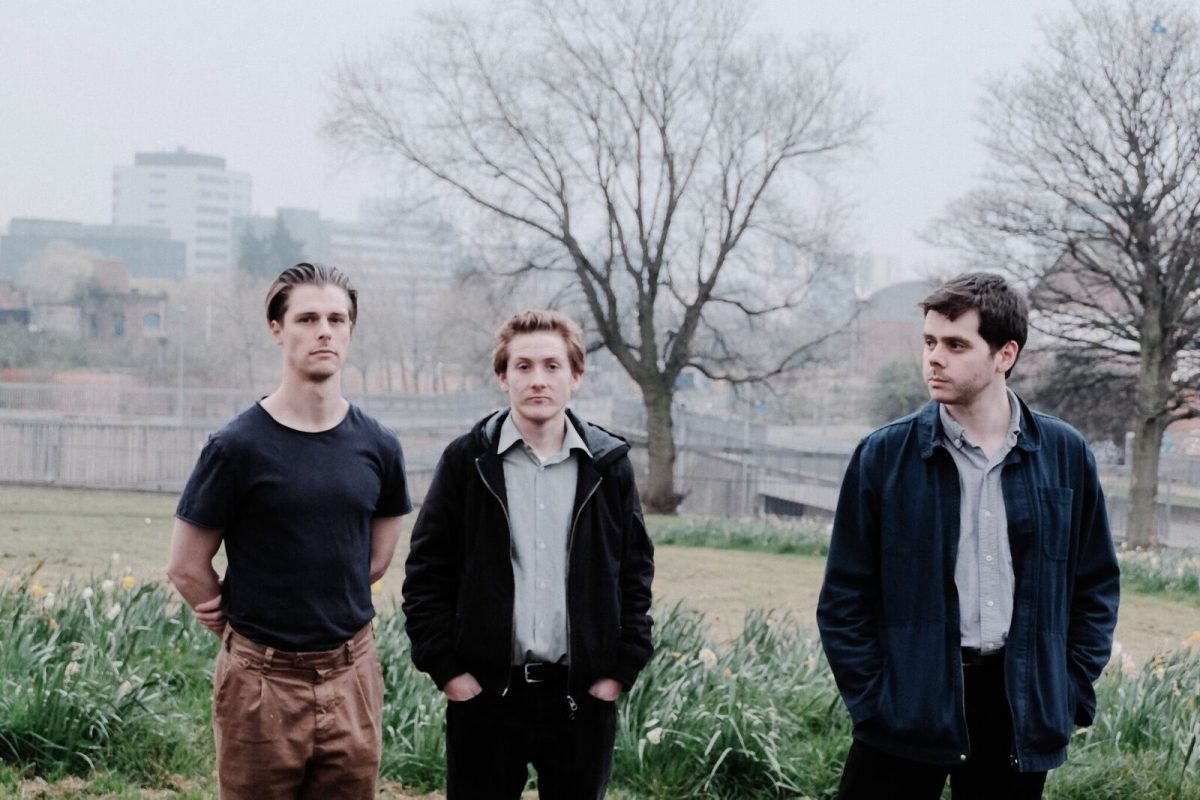 In Swill’s propulsive psychobilly assault Eyesore & the Jinx call out out a media that wants you “Scared of your neighbours / Scared of your friends / Scared of everyone you can’t identify with”, contracting into a fearful unit, frightened even of pleasure itself. (The lyrics are perhaps the first in the world to namecheck ‘hedonophobia’, fear of enjoyment.) The speed-rush switches out to a reflective outro in one of the band’s signature tempo changes, finishing on a necessary human statement: ‘no-one is illegal where I come from’. Swill is an unfiltered clear-sighted response to the outputs of media platforms for hatred, a song of appalled, sardonic fury – essential listening in a shifting and uneasy world. With live dates around the UK beginning to appear, extensive radio and a handy PRS grant, the Eggy Records emergers are deservedly expanding their sphere of influence.

Just when you think all the truly great song titles must have been taken by now, along comes Love is Like a Moshpit. Behind the ‘how come no-one said this before’ poetic headline is a hard-hitting, won’t-let-go song with LA artist Duckwrth and dynamic rapper Rico Nasty spilling painful words over an atmospheric piano-driven track. Production by Medasin gives generous depth and space to a moody, raw and emotive cut.

Note: Duckwrth is no relation to beloved Corrie character Jack Duckworth although the actor who played him did make records… which can sometimes be found in charity shops…

The second single from one-man bedroom bopmeister Charity Shop Pop (nom de guitare of David Hughes) is a jumping, effervescent tale of sadness. If you actually came across this recording in the vinyl bin of a charity shop you’d be thanking the dusty gods of chazza for letting you find a lost jewel of 80s synth pop. Charity Shop Pop makes his Sound City debut this week, which will doubtless be the start of a summer of joyful CSP-brand melancholia.

Meanwhile some pesky kids have made a video, exclusively premiered here…

In a darker dream, a desperate tale unfolds over a seductive bassline accompanied with industrial bleats on post-punk epic Just Like You. Drawn from IMPALA Album of the Year Street Worms, the track is a twisted journey, mocking others’ lives that we simultaneously despise and yearn for. ‘Thank God I didn’t end up just like you / Some kind of psychopath’ sings Sebastian Murphy from within a dream where he lives in ‘a nice house’ with ‘a lovely wife’ and ‘a little dog’ (that looks like large dog, but is ‘just a miniature size’.) Currently touring, the Stockholm sextet will bring their blackly humorous, rabble-rousing show to Liverpool’s The Shipping Forecast on May 22nd.

Launching this week at Deep Cuts #26, TRACKY’s new single Boys In Black is a big, bright exuberant blast of funked-out pop brilliance. Like a Scouse Jamie T , TRACKY raps quickfire, witty lyrics based on everyday experiences. The subject this time is boys trying to be men – dressed all in black with a fake ID, strutting through the streets of Ormskirk talking with a fake accent. As we’ve come to expect from the ever-positive ‘pop sorcerer’ it’s a hook-filled buzz-bomb of a song, retro synths swirling around an irresistible groove.

Battle, life and death are given a metallic celebration in Burning Hammer, a tribute to Japanese wrestling legend Mitsuharu Misawa. ‘In a violent manner – die by burning hammer’ sings Federico ‘Mace’ Mazza in a pounding, thrilling slice of no-nonsense new-wave British metal. It’s a fun track but dig deeper and there’s a serious intent to the lyrics, pointing out the crowd’s complicity in the process that led to the wrestler’s tragically early demise. The London five-piece unleash further hostilities in May on new album The Inevitable War.

Crow, from bearded London duo Bear’s Den’s new album So That You Might Hear Me, is a moving reflection on grief and mortality. The lyrics conjure the feeling of looking back on irretrievable times with a lost loved one, poetic images of falling black feathers combining with prosaic references to John Player Special cigarettes. Bear’s Den have a close relationship with their fans, which enabled them to make the emotive video (filmed in São Paulo, Nashville, London and Brussels) featuring pairs of family members reacting to hearing the track for the first time.

A distorted recording of a young girl’s voice – apparently a Mexico City rag and bone cart call to action – leads in to a rusty, heavy psych groove in Life Goes On. Driving onwards seems to be a theme for the band (their album titles comprise fast-forward symbols, a progression from BEAK>, to >> and then inevitably >>>), and this Krautrock-inflected loose-shambling beast has a sense of progressing resolutely on a journey. The track is the first to be released from a forthcoming EP by the Bristol trio, comprising Portishead’s Geoff Barrow, Billy Fuller and Will Young.

Katy Alex – Fool for You

“It’s a beautiful crisis, but it’s all that we have” sings Katy Alex, pouring out a blissful rush of pure pop in Fool for You, her third single. Once described here as being a bit like a Scouse Kylie, the Soundstation winner and rising pop artist will be kicking off her Sound City main stage performance with this track on 4th May. The single comes dressed with a potent illustration of not having one’s cake and eating it and there are rumours of associated home-video travelogues as collateral.

The Cheap Thrills – Smile When You Sleep

Liverpool garage/psych outfit The Cheap Thrills take a pop-eyed look at one of life’s fundamentals – sleep – in their lush new release. The opposite of somnolent, Smile When You Sleep is exhilarating and anthemic with a blissy edge – a monumental indie adrenalin fountain. The fourpiece will be waking up festivals around the UK in the coming months including The Great Escape and Liverpool Sound City.

Earth – The Colour of Poison

Dylan Carlson and percussionist Adrienne Davies serve up evocative doom on The Colour of Poison, from the upcoming album Full Upon Her Burning Lips. The track is an immense and gloomily beautiful instrumental dirge, enfolding but not claustrophobic. Taking its time to spin its soundscape, The Colour of Poison is gigantic but somehow almost sparse; each riff, hum and beat offered up like an object for meditation.

Scottish singer-songwriter Siobhan Wilson closes out the month with April, a haunting folksong accompanied with a beautiful dance video interpreting the lyrics. Wilson is a ‘delicate and friendly voice’ making a powerful statement promoting ‘the idea to create your own existence’. A ‘song written to my teenage self,’ April defines many ways a woman can do or be whatever she wants, whenever and however she wants. A stirring offering from an artist creating haunting, intriguing and affecting music.