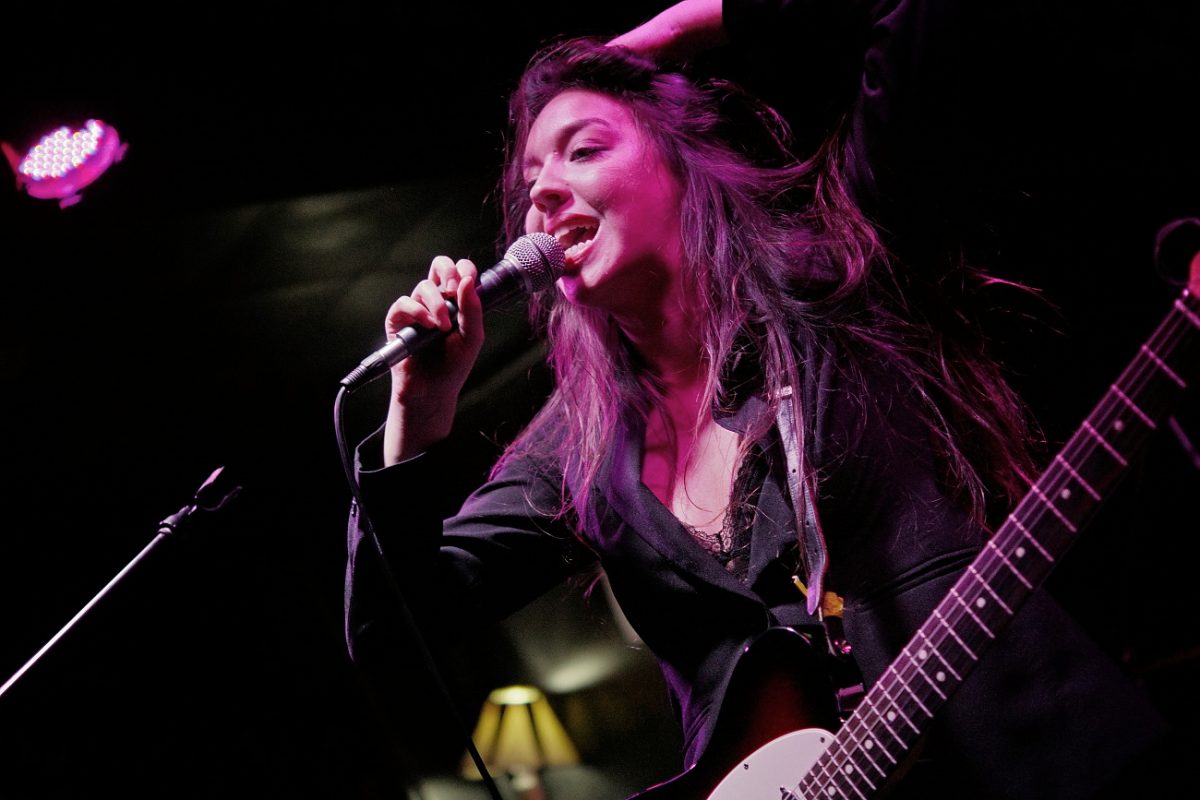 The Mysterines begin their own nationwide headline tour and Getintothis’ Wilf Haag sees a bright futire ahead.

The Mysterines,on their own first headline tour, dropped in at Night People in Manchester following a support slot to Miles Kane on his nationwide tour.

It promised to be a special evening.

We arrived just in time for the start of the first support act, The Velvet Shakes. Their electronic disco and guitar-lead pop music was quite pleasant to the ear.

The second band, Tinfoils, play a heavier style of music; they describe themselves as a garage-punk band with DIY guitar-driven music and are, as the Velvet Shakes, based in Manchester. They also delivered a decent circle of songs.

Everybody in the audience which had by now grown to capacity was looking forward to the arrival of The Mysterines, though. Twenty minutes after Tinfoils had finished their set, the room went dark and we were in high anticipation of what was to follow.

As if out of nowhere, here they were.

Lia Metcalfe on guitar and vocals, George Favager on bass and Chrissy Moore on drums.

The band started playing a short intro before embarking on a journey with their first song Good Conditions and it’s a journey you want to be on!

The three newer songs (Keep It Bleeding, Love’s Not Enough and Instant Bride) that they have incorporated into their set since last year fit perfectly in with their older ones.

All of their songs are high-energy affairs, but The Mysterines make it look as if it was the easiest thing on earth.

Lia’s voice and guitar playing – she also writes all the songs – are amongst the best in the industry at the moment, and the same applies to Chrissy’s drum and George’s bass parts. Their enthusiasm on stage has to be seen to be believed.

Some of their guitar riffs are anthemic; especially P.H.T. which, after hearing it the first few times last year, is one that stuck in this writers head for days afterwards.

The Mysterines played nine songs including their excellent singles Hormone and Bet Your Pretty Face and wrapped things up with the latest single Gasoline which is already a favourite with Radio 1 and 6 Music.

Gasoline is the perfect culmination of a brilliant set; full of aggression and a melody that stays with you long after the show has finished.

We met two lads who had seen them for the first time in the Cavern Club for BBC 6 Music Introducing a few weeks ago and were so blown away that night that they specially travelled over from Liverpool to Manchester just to see them again.

Steve Lamacq on Going Deaf for a Living: Nirvana, Aphex Twin and a life in music

They have now properly arrived on the scene and the people who used to ask ‘who are The Mysterines?’ are becoming fewer and fewer.

They were not alone in this because judging from the audience reaction during and after the gig, everyone else was similarly knocked out by The Mysterines in Manchester.