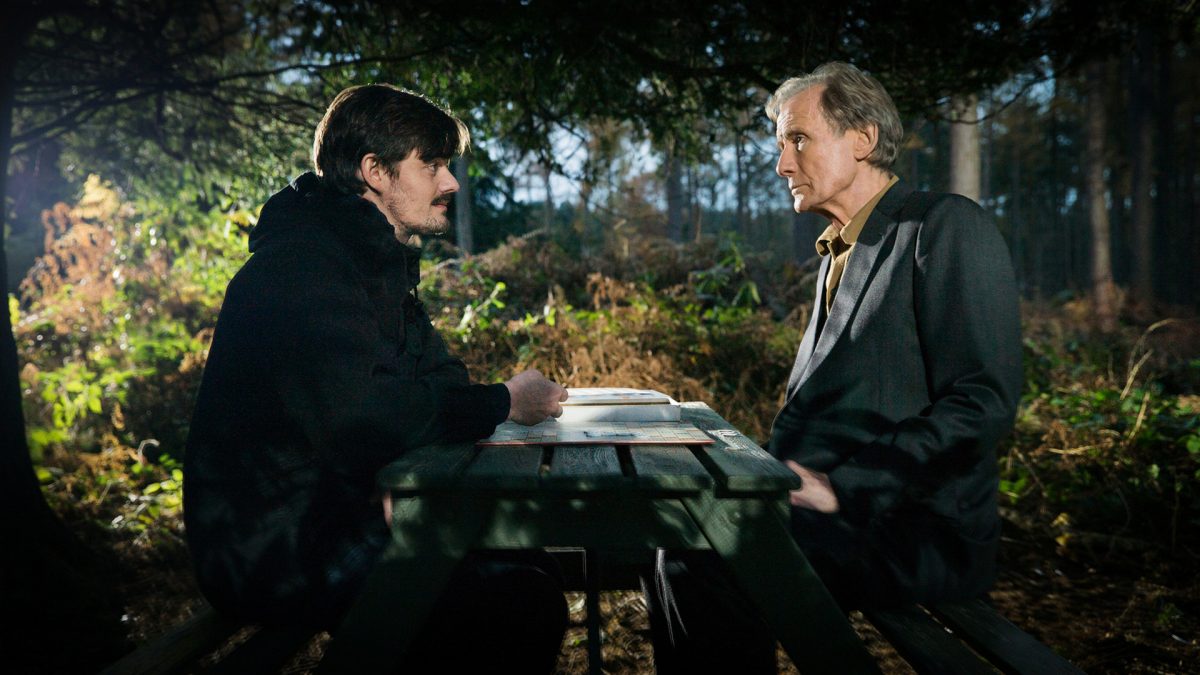 As Carl Hunter’s feature-film debut Sometimes Always Never rolls out across UK cinemas, Getintothis Roy Bayfield caught up with him to talk about alchemy, working-class imagery and a fantastic Edwyn Collins soundtrack.

In music, as the bass player in The Farm he is part of an iconic band. As a producer and encourager he has helped progress the careers of several new artists via The Label Recordings. As a visual artist he produces strangely poetic photographs and evocative retro designs.

Sometimes Always Never, Carl’s feature film debut, brings all of these threads together. It is a poetic visual production, each scene constructed like an individual artwork.

The soundtrack by Edwyn Collins and Sean Read contributes massively to the emotional landscapes that the film creates. And even in the fraught, results-oriented process of commercial film-making Carl found ways to involve some early-career newcomers.

The film, in which Bill Nighy plays a scrabble obsessed tailor searching for his missing son, is written by Frank Cottrell Boyce and produced by Hurricane Films (an outfit that includes Farm drummer Roy Boulter). It is on general release now, charting at 14 in its opening weekend.

Getintothis caught up with Carl for a few questions over a cuppa.

Getintothis: The film has a highly distinctive visual style. The colours are rich and saturated; scenes that could be forlorn and bleak have a massive warmth to them. The images of crazy retro wallpaper [photographed by Clare Heney]  that punctuate the action are so dense and textured they’re almost psychedelic. Is the style a metaphor?

Carl Hunter: “Yes, there’s a very strong meaning to the visuals. I’m really inspired by people like Aki Kaurismäki, who’s a Finnish director – I love the look of his films.

I’m also a fan of Wes Anderson, who I’ve been compared to a lot lately but I’m more into Aki Kaurismäki – Paddy Hoey calls me ‘the Bootle Kaurismäki’.” 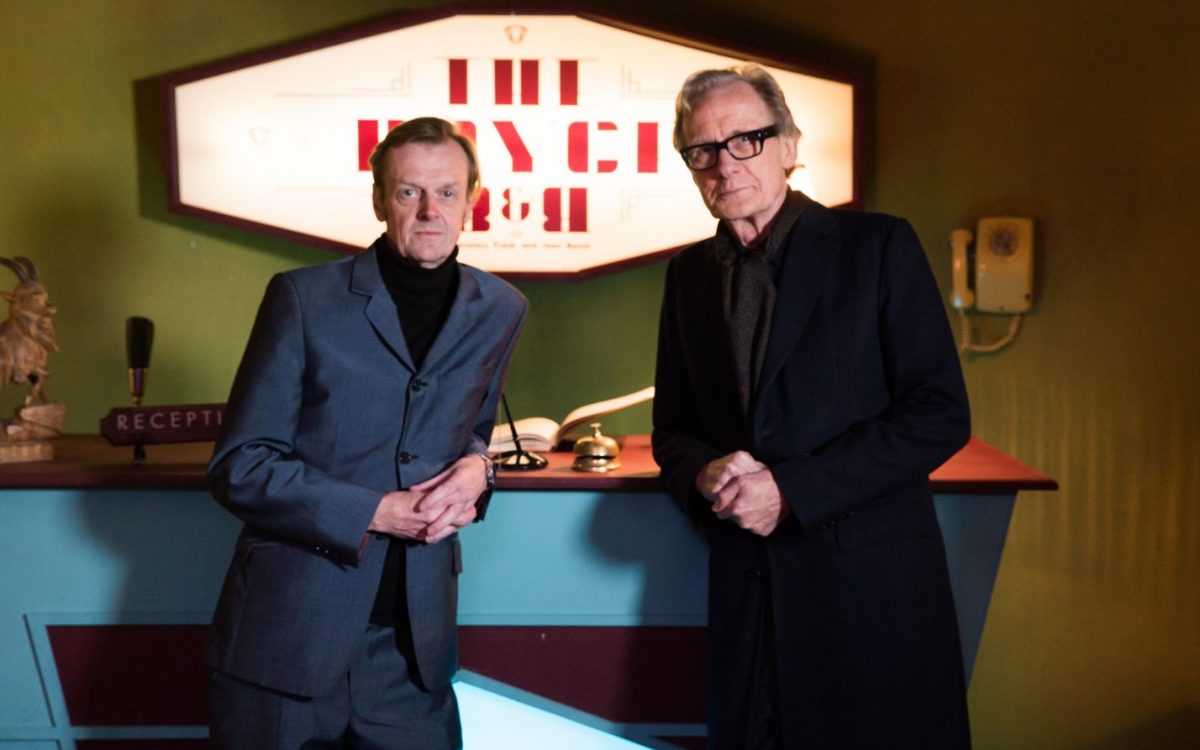 Getintothis: The film appears to be set in the present day, with people playing computer games and using mobiles, yet the sets and props place it a kind of kitsch hinterland with big chunky crockery that looks like a seventies Pinterest board. There’s a scene in an office with a brilliant picture of a town’s ‘New Civic Roundabout’ that looks like something from the 60s. What’s behind the temporal dislocation?

Carl Hunter: “What I wanted to do was get across that the family are trapped in the past, because of grief. Although it’s a contemporary film it’s designed to make you think ‘oh, is this set in the past?’

So the look of the film is one big visual metaphor to suggest that the family is trapped in its history – and until they’ve solved this issue, they can’t move forward.

Indiana Jones to Tarkovsky: falling in love with the movies and a personal journey through cinema

“Things like back projections [seen while characters are in a car]– I could have shot them on a low-loader, or against a green screen and made them real, but I deliberately wanted to make them look fake, to heighten the sense of the characters being in a situation that’s just mad; ‘how can it be true’?” 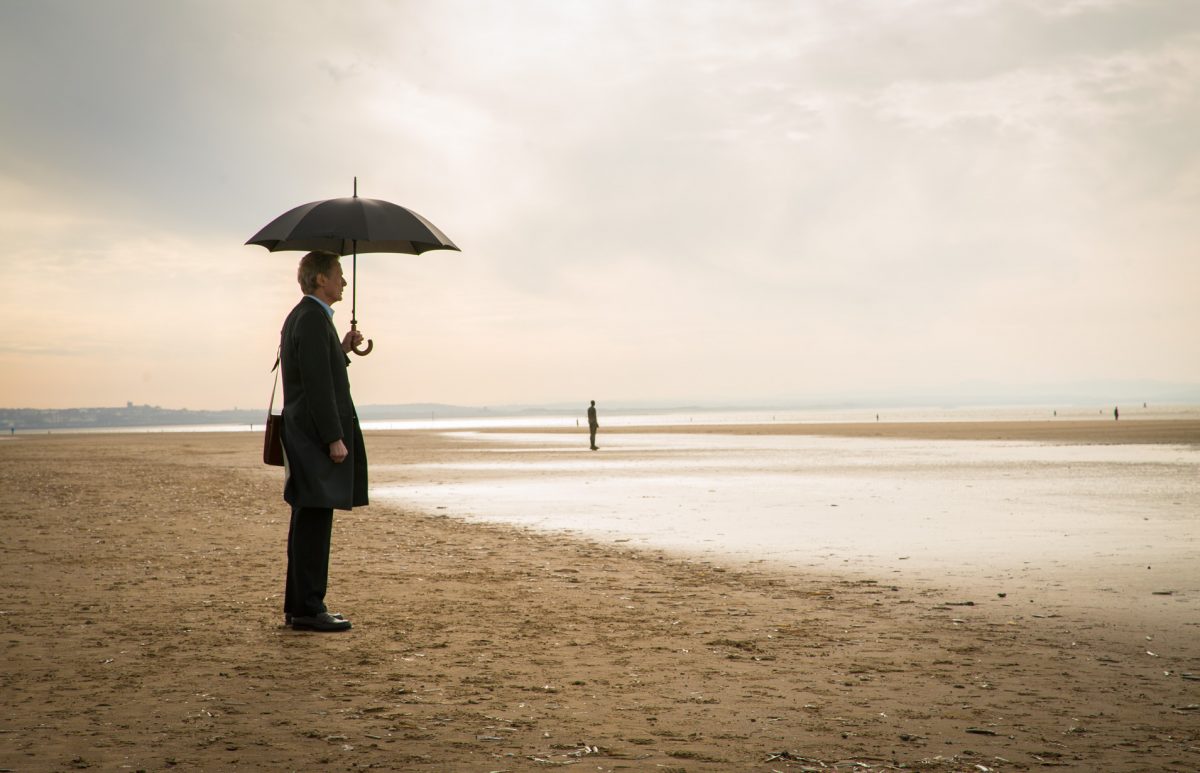 Getintothis: Bill Nighy plays a tailor and the film’s title is the rules for buttoning jackets – there’s something about style and elegance in the whole production, that seems to go beyond just defining that character.

Carl Hunter: “The film is very stylised – I wanted to make a stylised film for a number of reasons. The film is about a working class family.

So all I’m doing really is kicking against what’s been before, saying ‘well why not photograph the type of people I know, the ones that dress well, that are lovely people’. I think they’re underrepresented in cinema and television.

There’s no alcoholics, no wife-beating, no violence – the closest thing to violence is when Sam snaps a dictionary shut.”

Getintothis: Sometimes Always Never has a very evocative soundtrack that builds up to two corking pop songs at the end. Did you always have Edwyn Collins in mind for the soundtrack?

But also I’d seen Submarine a few years ago, and Alex Turner from the Arctic Monkeys did the soundtrack to it and I remember thinking ‘that’s a great idea – take someone who has never done a soundtrack to a film, but is known for songwriting, and let them have a go’.

So I asked Edwyn and he said ‘yes, but I’ll need some collaborators’. We recruited Sean Read from the Mockingbirds and Chay Heney from Station Agent (ex-Sugarmen) – and the three of them disappeared to Helmsdale in Scotland which is where Edwyn Collins studio is and like three musical alchemists produced this amazing soundtrack.

“I used to go up every few weeks and say for a day or so and they would excitedly play me what they’d done for this scene or that scene, and I’d sit there and go ‘wow’.

Edwyn’s studio is an Aladdin’s cave, full of vintage instruments and electronics – it’s a real experience. Edwyn loves vintage guitars and equipment – he’s go ‘I’ve got this pedal’ or ‘I’ve got this keyboard’ and the three of them would play around with it – they’re like a supergroup.”

Getintothis: Without giving too much plot away there’s a thread about ‘not the original artists’ albums like Pickwick Top of the Pops album – what’s the story there? 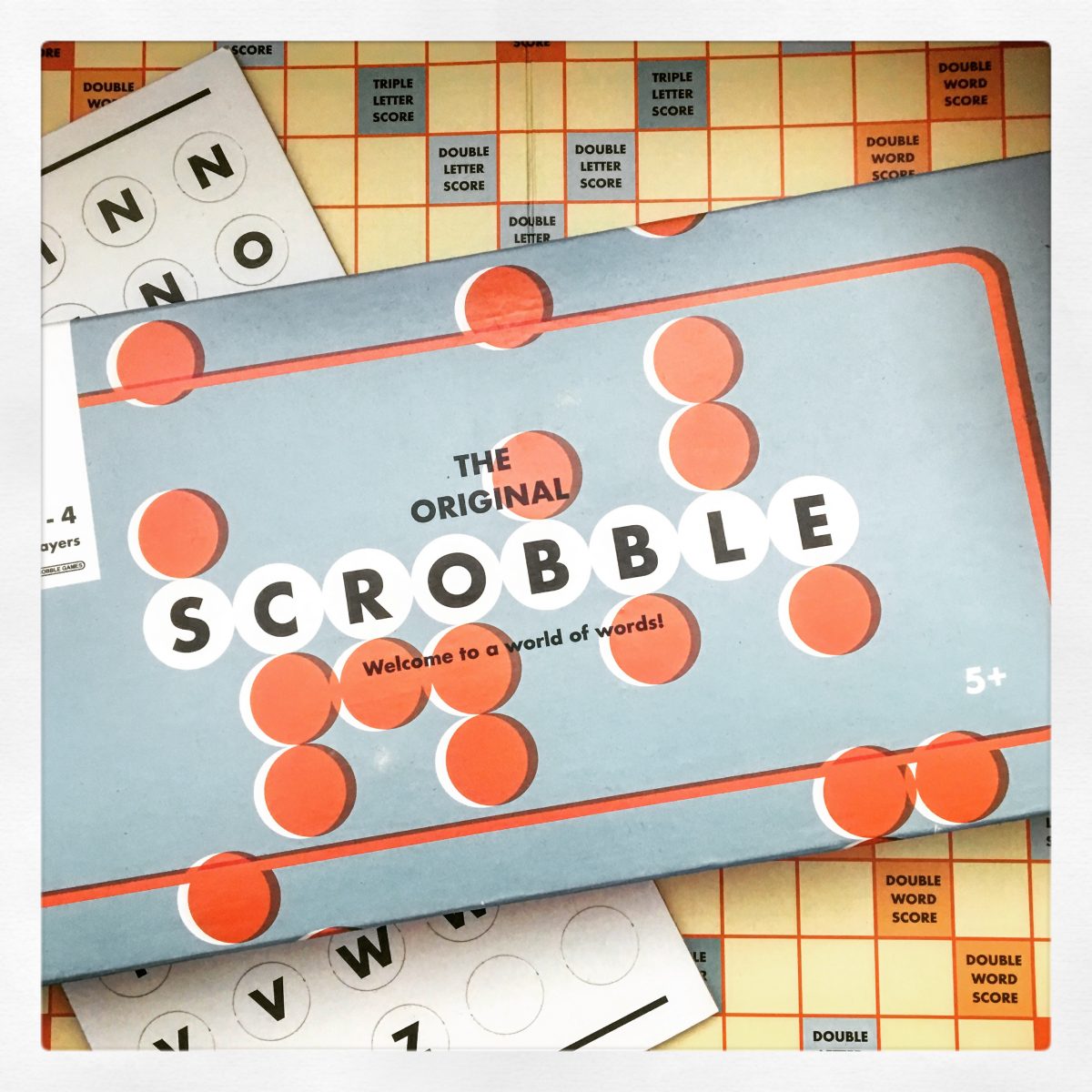 “We had this thread running through the film of the family always having kind of copies of things – Chad Valley Soccer instead of Subbuteo, not the real Action Man, a fake version of Scrabble.”

Getintothis: So the Top of the Pops albums are part of that vibe?

Carl Hunter: “Yes. Frank [Cottrell Boyce] gave me a link to Radio 4 documentary about Top of the Pops albums and it’s a fascinating story – basically there was one man who sang on nearly every single song, whether it was Slade or Gilbert O’Sullivan.

We needed to find something to do – a job that Tim McInnerny‘s character could have in his backstory.

Frank had this genius idea – what if he was that bloke from the Top of the Pops albums, that sang on over 300 tracks but nobody knows who he is? In that documentary it mentions that he sang on a Bonnie Tyler song – he was Bonnie Tyler, so we included that.

We needed the Bonnie Tyler song It’s a Heartache and we needed Tim to sing it.

We couldn’t get access to Bonnie Tyler’s backing track so we needed to recreate it from scratch. We took Tim into a recording studio and he sang over the original. Then we deleted the original track so all we had was Tim’s voice.

We brought Tim’s vocals to Edge Hill University’s recording studios and [course leader] Gary Westhead found four talented lads who are doing a Music Production degree at Edge Hill, a band called The Pre-Amps, and they learned it note for note.

They played to Tim’s vocals and did it note perfect – it sounds great!”

Getintothis: Some have called the film ‘quirky’ but to me despite its artificiality it seem like a work of realism, because people do speak and behave in random ways – what’s unrealistic is plot where people focus exclusively on a goal and never make a quip or do anything odd. Are you comfortable with the ‘quirky’ tag?

Carl Hunter: “I don’t particularly mind it. I’m not sure it’s accurate. I think it’s a film that’s visually aware, I’m not sure that’s the same thing as quirky.

I think families are quirky. People want to say something but they never do, so they find other ways of communicating. That’s subtext, most people talk in that way.

And we all have our peculiar little traits as well. We deal with grief in different ways; with sadness, with loss – with happiness.

We do odd things. People collect crisp packets. Is that odd? Not really! But we do things outside of what’s termed normality.

And how can you define normality anyway? In Sometimes Always Never the situation definitely isn’t normal – it’s an abnormal situation.

What I was trying to do I suppose is tell a story that’s abnormal in way that makes it mundane at the same time.”

Getintothis: The film has a high-profile cast – Bill Nighy, Jenny Agutter, Sam Riley, Tim McInnerny – what’s it like working with such recognisable names?

Carl Hunter: “That particular group of actors were great fun to work with.

With that calibre of actors, because they are so good, working with them is quite easy, because they offer so many alternative performances and they often come up with ideas that surprise you.

There’s a scene where Jenny Agutter’s on the stairs wearing a towel. In the script originally it was a dressing gown.

Jenny arrived on the set and said ‘Carl, I’m wearing a dressing gown’ and I said ‘Yes I know it’s in the script’ – and she went ‘Dressing gowns aren’t funny. Towels are funnier.’ So it was her idea to wear a towel.”

Getintothis: From now on I’ll always think towels are funny on the authority of Jenny Agutter.

Carl Hunter: “Sometimes I’d say to Sam Riley, ‘Don’t say that line, just think it’ and he was incredibly good at that, acting so you just see his reaction.

And Bill Nighy, who is such a star to work with – his memory is incredible.

He memorises the entire script, all 98 pages, every single line of everyone’s parts. He always know exactly where he is, and where other people should be.

Bill makes you feel incredibly welcome and confident – a wonderful actor to work with.”

Getintothis: It’s an ensemble piece definitely but Bill Nighy’s presence holds it together as he wanders through the narrative – this tall dapper guy with an enviable Fred Perry collection and a core of sadness. Does it change the dynamic having a big star as the centrepiece of the film?

Carl Hunter: “Yes I think it does, and this isn’t me saying it, it’s the cast – ‘once you’re in a film with Bill, you’ve got to up your game.’ But they loved it because of that reason.” 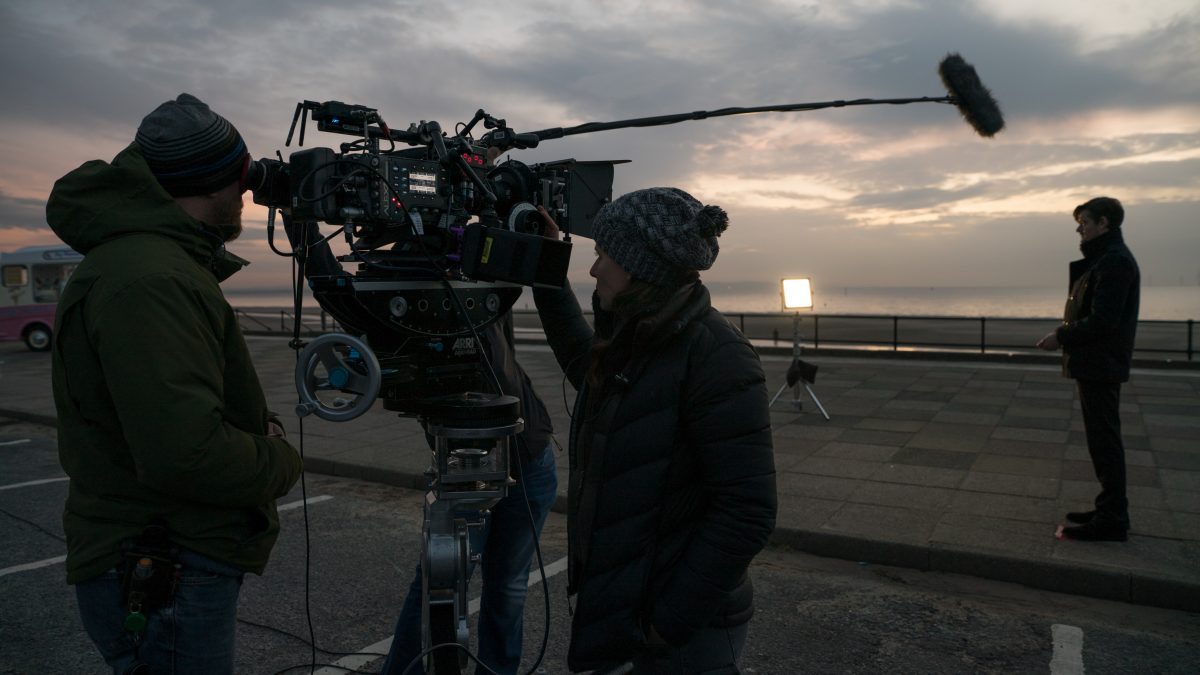 Getintothis: As someone who lectures in film (at Edge Hill University), is there anything you learned yourself while making Sometimes Always Never that you’ll be passing on to students?

Carl Hunter: “I think when you make a feature film you learn every second – it’s frightening how much you learn. The biggest thing I can teach is that you’ve got to be connected to industry, make friends in the industry.

If you’re around industry you learn things which the classroom can’t deliver – the classroom can teach you lots of brilliant things but not what’s it like getting up at five in the morning and being on your feet for 12 hours, and dealing with 65 problems in a minute.

The best way to teach that is to bring a student with you so they can stand with you for a day and absorb the kind of marathon you’re on.

And I did do that – we took eight students over a few days and they were quite shocked at just how much stamina you need, but they also said it was one of the greatest things they ever did, because they learned so much.”