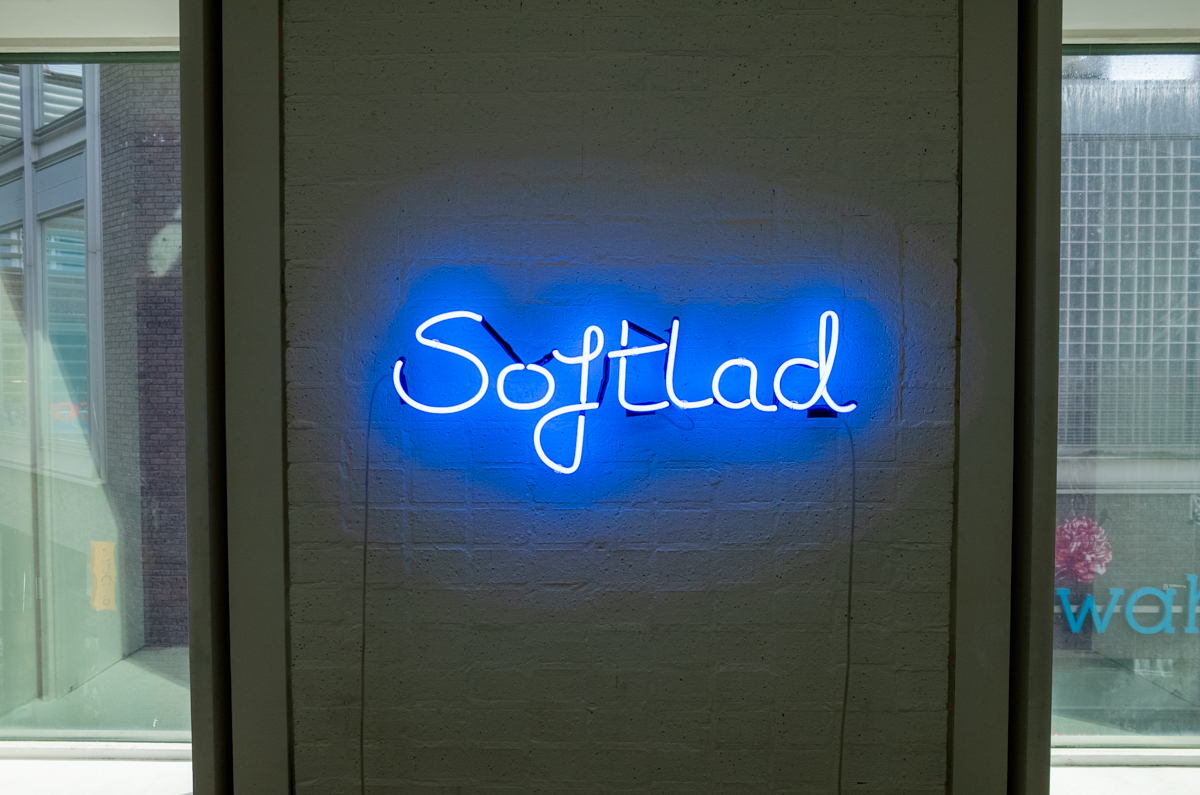 The Bluecoat’s Survey exhibition has art to make you stop, think and smile as Getintothis’ Rick Leach discovered.

It was a normal, frenetic Monday lunchtime in town as we wandered down to the Bluecoat to catch up with their major spring exhibition, Survey.

We weaved our way through lunchtime shoppers, workers, children, dogs and assorted buskers and headed into the exhibition.

It was an oasis of calm.

The Bluecoat is always like that. It gives you time to stop and think, away from the hustle and bustle of daily life.

And sometimes it makes you stop in wonder. Which is exactly what we did when we took a look around Survey.

Survey is a major exhibition presenting new work by 15 early-career artists from across the UK spanning spans a breadth of disciplines including ceramics, film, performance, podcast, painting, sculpture, drawing and collage.

The artists were selected by Sarah Williams, Head of Programme at Jerwood Arts, from nominations initially made by over 35 established artists.

The first exhibit we caught up with was Anna Raczynski’s The Movie Makers; a short film about members of an amateur filmmaking group, The Pendle Movie Makers who are based in Colne, East Lancashire and the artist’s relationship with the group as its most recent member to join in 2017 and as an artist filmmaker. This is art that speaks of ageing, change, technology and community.

Simeon Barclay’s Decoy and A Track with No Name pulls together music journals, fashion magazines, comics and other ephemera with collages of both photographic material and text. Simple images and things we’d never give a second glance at melded in a way which question images themselves, their symbolic potency and the way they can be reclaimed to explore the anxieties around belonging and subjectivity.

Chris Alton’s  A Hollywood Film in which Climate Change is Averted, is a new fabric banner that calls on our collective responsibility to address major social and political issues that will impact future generations. Reminiscent of Trade Union banners it hangs over our heads and made us smile. 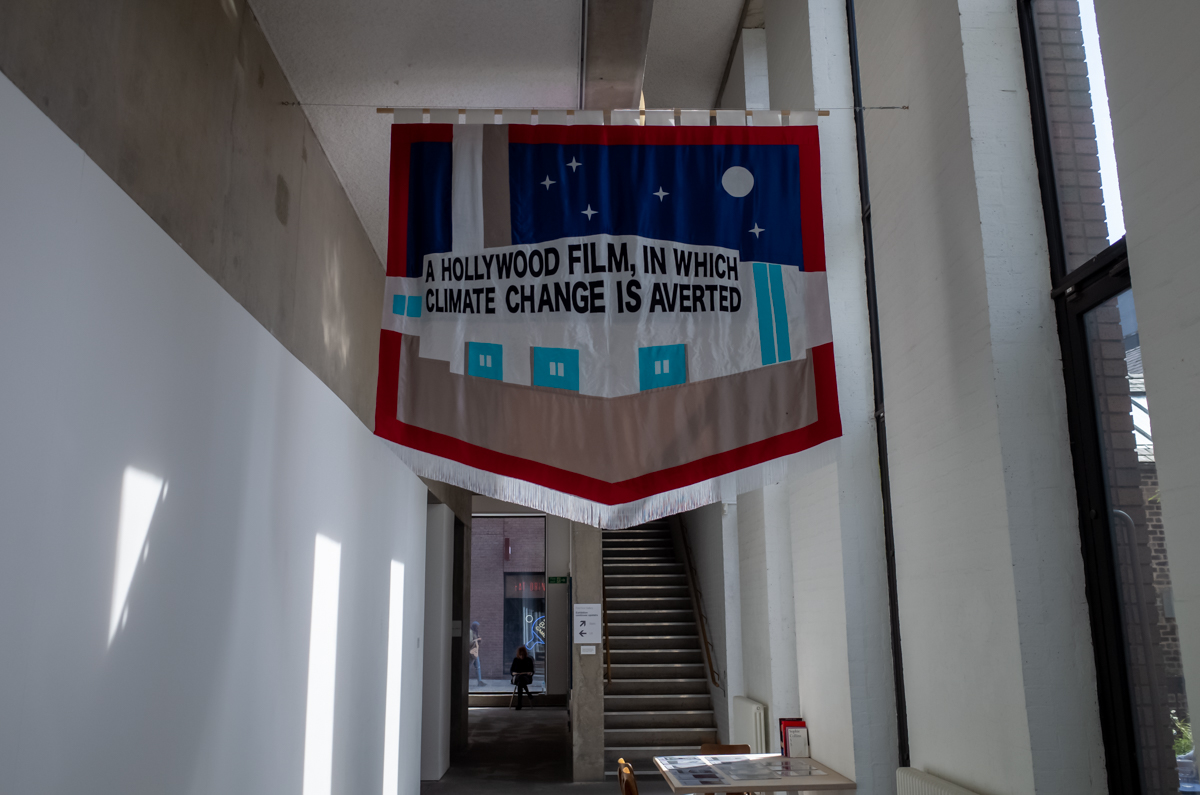 Chris Alton – A Hollywood Film In Which Climate Change Is Averted

Who would have thought cardboard boxes would have so much power? Will Sheridan Jr collected flattened and wrapped cardboard boxes from outside fashion stores in Mayfair during closing hours then reconstructed the cardboard to reform the original packaging. After painting the boxes he mounted photographs on either side to recreate a visual which resembles fashion ads and billboards for designer brands.

Suspended in mid-air and spinning around slowly is Rae-Yen Song’s Happy Happy Leaf. It immediately captures ones’ attention and because it’s visible through the large windows of the Bluecoat, that of many stray people passing by.

Maybe this is the way to get the workers, shoppers and children (but not dogs) into the gallery. Let them glimpse it while they’re doing something else. Grab their attention and like us, ponder what it’s all about.

The sculpture, or statue, is the object of an unspecified idolatry and draws on strands of the artist’s identity as a female Chinese Scot. The work looks to the particularities of Chinese and Scottish cultures, with their distinct historical and contemporary links to ceremonial traditions, ritual actions and attitudes, such as those surrounding the drinking of tea. 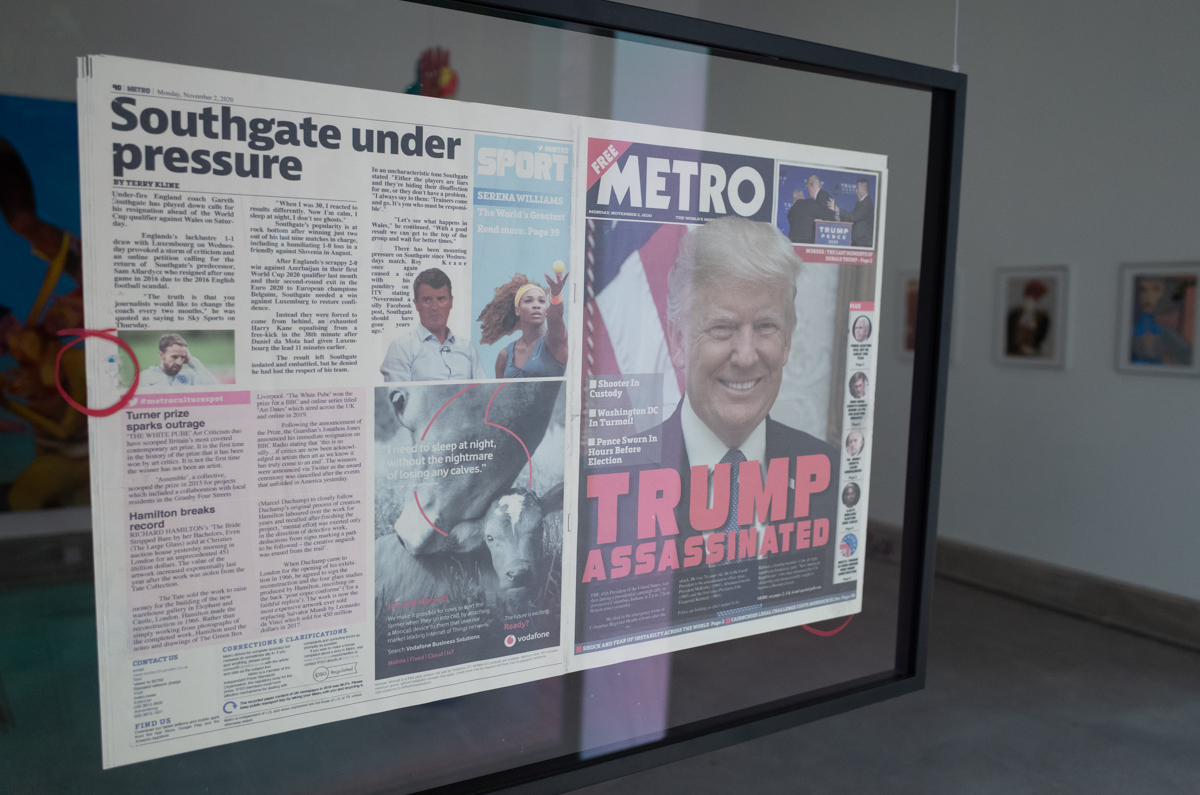 The content of the newspaper contains details of the assassination of Donald Trump, the reaction of Prime Minister Jeremy Corbyn, a controversy engulfing the recently elected government over a return to a hard border between Northern Ireland and the Republic of Ireland, a bill passed making zero-hour contracts illegal, and NHS concerns on the rise of screen viewing-related illness.

As a matter of interest, according to Wasser’s work Specsavers will still be running 2-for-1 ads in the Metro in November 2020. Go in and have a look carefully at the artwork. It’s there in the bottom corner.

From these and more, like Hazel Brill’s We gathered around the puddle, smiling patiently, Milly Peck’s, Landing Good Sync Will Pay Dividends and Lindsey Mendick’s, I’ll Always Love You But I Don’t Always Like You we had a distinct sense of these emerging artists coming up with something new and exciting.

They are dealing with serious issues and thinking about things in a very serious way yet tempered with a sense of fun and humour.

None more so than Liverpool artist Joe Fletcher Orr. He often references his family or uses them directly in his work and the neon in Soft Lad was handwritten by his mother with a direct quote from his father. It’s worth going to see the exhibition for this alone.

We spent an hour there. We could and should have spent longer. We will be back.

We all need to stop and think and smile. 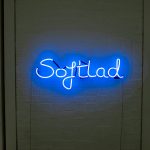 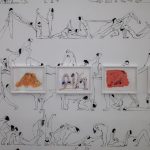 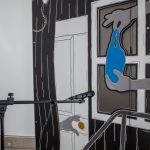 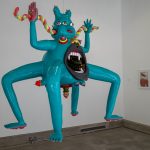 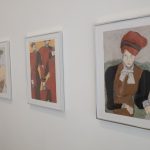 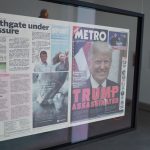 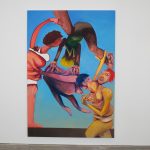 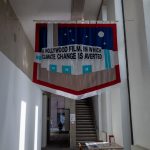 Chris Alton – A Hollywood Film In Which Climate Change Is Averted 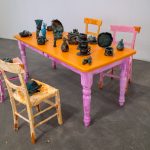 Lindsey Mendick – I’ll Always Love You, But I Don’t Always Like You 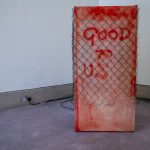 Ashley Holmes – Good To Us 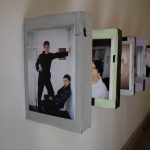 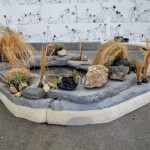 Hazel Brill – We Gathered Around The Puddle, Smiling Patiently