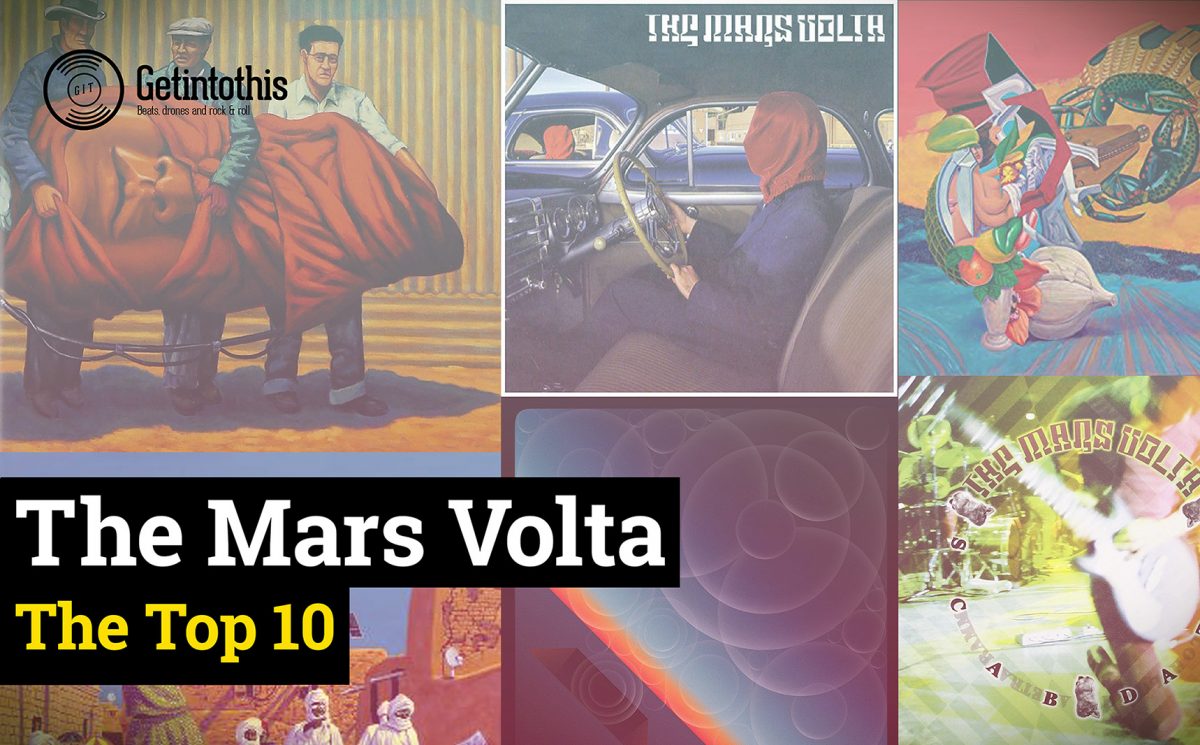 The Mars Volta are rumoured to be making a return and Getintothis’ Matthew Eland ventures beyond the marble shrine to give us ten of their best.

As they trudged off stage, it was clear that the creative spark that had ignited 11 years and 6 albums of virtuoso, free-wheeling and occasionally maddening rock had finally been extinguished.

Omar Rodriguez-Lopez‘s body language said it all: hunched almost motionless over his guitar, the upper frets removed to prohibit his trademark soloing. This left The Widow and Goliath – cornerstones of their maximalist style – denuded and blocky, stripped of their trademarked verve.

The dischord was palpable. Cedric Bixler-Zavala and Juan Alderate did their best to keep up energy levels, but it was clear that the hearts of some just weren’t in it.

Either way, the group were seemingly finished.

The soap opera went on, though. (The whole Volta story will make a great book one day.)

Bixler and Rodriguez fell out, made up again. Rodriguez gave us Bosnian Rainbows, then committed to a new ATDI album, called in•ter a•li•a.

BIxler had his phones and computers tapped by the Scientologists he accused of covering up his wife’s sexual assault.

Guided By Voices: a buyer’s guide to the legendary band’s back catalogue

Amid all this, there were hints that the group would one day return.

The most concrete of these arrived a couple of weeks ago in some now-deleted tweets from Bixler, worth quoting here in full:

‘What it’s NOT going to be is your ‘fav member lineup’ playing their ‘classic records’ in full etc.

I will say this though, when ORL played me a grip of new shit I fucking cried. Like Claire Daines in Romeo & Juliet cried.

Yeah it was fucking weird. It’s in its infancy right now.

No deadlines, no ball tripping, no drama, just 2 grown ass men using essential oils and bold new perfumes shooting ideas and scooting their ass across the fucking lawn trying to get rid of these worms.’

The old Volta themes of parasitic possession: present and correct. Talk of campaigns, with its insinuation of direction and purpose – of a mission – is also welcome.

They need to get a few things right, though. They need Jon Theodore back on the drums. A return for either founder-member Eva Gardner or Juan Alderate on bass is also essential.

They shouldn’t try to emulate past achievements, but in looking back we can remember about what made them so good, and start to look forward.

Despite perhaps being their weakest album, 2012’s Noctourniquet wasn’t without its weird, glitchy highlights.

In Absentia is a mordant, cavernous echo chamber of a song in its first half, building on the freeform, synthy promise of De-loused‘s hidden track Ambuletz, with Deantoni Parks‘ robotic, chaotic drumming as backdrop. The second half is more conventional: a swaying, woozy emergence into blinding daylight.

Octahedron finds the band in their most stripped-back guise.

Luciforms starts with one long note, slowly building from the silence. When the song properly kicks in, it’s half wild-west showdown bell-tolling, half Mexploitation revenge chant, all ending in one of Roderiguez‘s most malevolent solos, set against Nick Cave piano and shimmering synths.

There’s even a false ending and cinematic reprise, all dark vaudeville and audacious villainy.

Named after the Equadorian stratovolcano, Cotopaxi is the Volta‘s Immigrant Song.

More than that though, it’s a hell of a riff: a rolling, swashbuckling escape from pyroclastic purgatory.

This album was the group’s Frankenstein’s monster.

It’s the last to feature Theodore, the first without a unifying theme, and a paean to the most baroque and maddening of their excesses. (Q magazine likened it to “an explosion in a guitar shop”.)

It’s also the one where the wheels of their runaway train began to judder and buckle. Sometimes brilliantly so; Tetragrammaton starts as an evil riff machine, before (literally) pressing rewind, starting again at a different point and going full Morricone. It’s a spooky, haunted and unpredictable celebration of virtuosity.

The Volta have never been funkier.

It starts with a fuzzy, treated vocal; perhaps that of one of the restless spirits said to have been invoked via Ouija board during the album’s haunted gestation.

From then it’s all wah-wah and tight, snakey, cop-show riffs of the type at which the group excel. After a false ending, there’s a jump back to the dub of Cedric and Omar‘s side project De Facto. And it all leads back impeccably into the following track, Wax Simulacra, with a concision that the group don’t get enough credit for.

After the success of De-loused, fans were clamouring for news of their follow-up.

Rumours swirled that it would consist of one massive long song. That wasn’t quite true…but more on that later.

Instead, we all turned the volume up, lulled into a false sense of security by the quiet, acoustic beginning…only to have our heads blown off by the robotic, frantic, Latino-Led Zeppelin-from-space opener.

It’s Fear and Loathing desert madness, with a crazed pinball-machine interlude and a reflector-sunglasses stakeout, all building up to a huge reprise of the chorus.

After that, the band begin the intro of what will become Cassandra Gemini, but that fades away behind the sound of playing children and passing cars, leaving the listener with the eerie sense of being on a difficult and dangerous journey.

4. Drunkship of Lanterns from De-Loused in the Comatorium (2003)

This one is a tight, itchy samba beat, one always straining against its structure with an agitated, hot-plate rhythm.

The song goes in different directions – into a free-jazz freak-out and then an echoey, subterranean warehouse, before the drum-tight breakdown snaps everything back in. It’s another example of concision from a band sometimes derided for their supposed self-indulgence.

The King Crimson influence comes to the fore on Goliath; it’s a complete rip-off of 21st Century Schizoid Man.

That said, the Volta do manage to put their spin on it. It’s perhaps Thomas Pridgen‘s best performance for the group. The then-24-year-old drummer’s virtuosity may have been a creative shot of adrenaline for Roderiguez, but his solo-all-the-time style wasn’t always strictly metronomic, to put it one way.

It could also lead to sensory overload. Here, though, that isn’t a problem; the easy groove allows for all kinds of room for showboating.

Goliath, incidentally, is the name of the entity that the band unleashed via Ouija board, who then proceeded to flood the studio, delete the master tapes and give one engineer a nervous breakdown.

While The Widow managed to get to number 20 in the UK charts, the Volta never really had a hit single that properly showcased the ability of the group.

The tune that could have filled that function is Roulette Dares.

It’s perhaps the most succinct encapsulation of the band’s powers, and an ideal gateway drug. If you like this, then chances are you’ll want to delve further. ‘Exoskeleton junction at the railroad delayed‘ doesn’t read like an anthemic chorus line, but it just works.

Bixler takes a lot of flack for his lyrics, but the maximalist grab-bag of escoteric terms and references frequently achieved heady, evocative results, and contrasted well with his more grounded moments: his cry of ‘inside‘ as the snare hits double in preparation for the chorus is a masterclass in building momentum.

The Pink Floyd outro demonstrates how good the group were at creating mood and feeling, a trait that allowed them to get away with the more baroque stuff.

This was the logical next step after De-loused: to go further down the rabbit hole.

While it didn’t take up the whole album as predicted, Cassandra Gemini is an attempt to create the uber-Mars Volta song, one that twists and turns and bends around its central premise in the same way as their live shows did. Indeed, it’s a distillation of some of the lengthy improvised jams they’d play when touring De-loused, as documented in live album Scabdates.

As to what the song is actually about: well, that’s anyone’s guess.

There are references to 25 wives floating in a lake, a marble shrine, and snakes pouring out of someone’s eyes, all against a Wild-West trumpet showdown.

I’ve never heard Dark Side of the Moon: adventures of a prog neophyte

There’s a melting, darkwave synth interlude that leads into another samba-influenced jam. There’s a descent into a floating, Dante-esque hell that only the rousing of drums and sax can release us from. Eventually we return to where we started with an exhilarating reprise of the main chorus, to a place beyond all light and time.

That the song retains its identity throughout its meandering, inventive 32-and-a-half minutes is a testament to the immersion and focus of The Mars Volta.

For a band often derided as being self-indulgent and ridiculous, Cassandra Gemini is an ideal rebuke; proof of their discipline and invention, a tribute to sonic exploration and creativity. Or perhaps, for some, it’s merely confirmation of that initial charge.

Either way: when they were at their best, they couldn’t be matched.