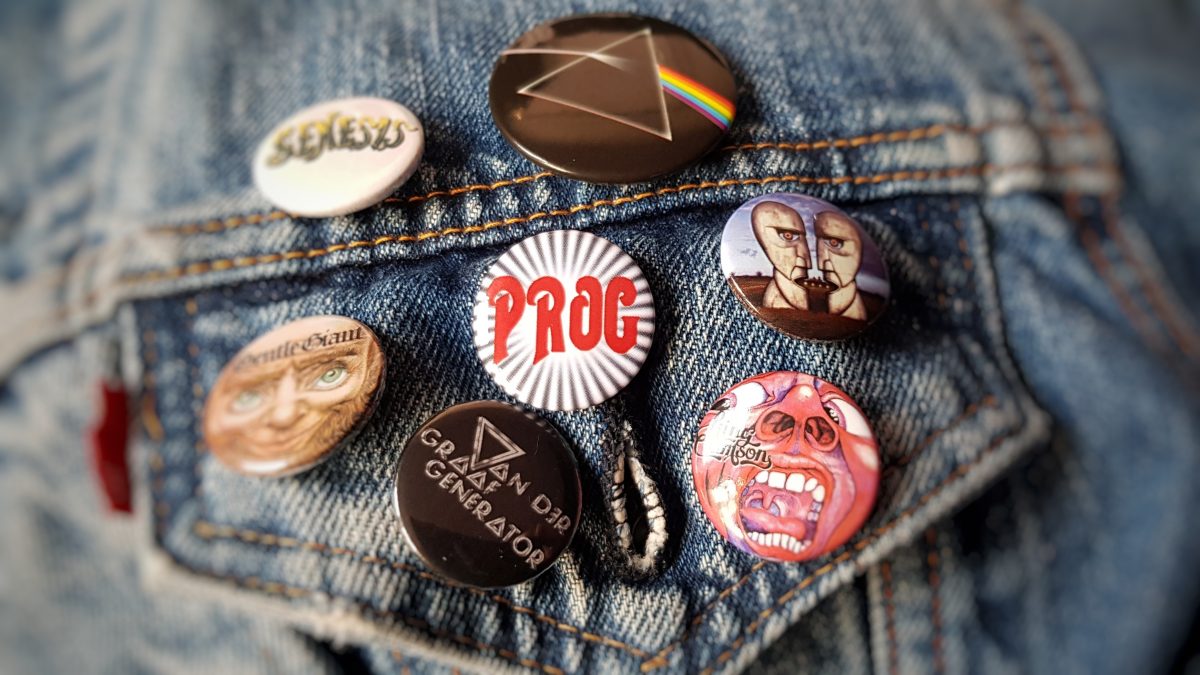 After a year listening to prog in all its forms, Getintothis’ Roy Bayfield reflects on what drives the appeal of a genre that many find baffling.

At the start of January it seemed like a cool kind of new year resolution – listen to an album every week from a genre I knew nothing about.

Every seven days would be a new discovery! Prog was a total gap in my listening as back in the day I had been sidetracked by punk just at the moment I could afford to buy albums. Listening to prog for the first time, there would be a freshness to the experience, a sense of living in an alternative timeline.

Of course in practice I didn’t love all 52 albums equally; there have been some dispiriting weeks when I wondered what I had got myself into (a by-numbers attempt at the genre by Kiss being the lowpoint.) But I stuck resolutely to the plan: one album per week, bands rather than individuals, no compilations.

Considering that prog is thought by some to be outdated, self-indulgent and slightly comical it has been an amazing journey. I started the year listening to proto-progressive psychedelic albums by Nice, The Moody Blues and Procul Harum; moved on to the big hitters such as Pink Floyd, Yes and Genesis; bumped through the 80s and 90s with neoprogressive acts like Marillion; closed out the year with more recent works by Porcupine Tree, The Mars Volta and Tool,

Part 1 – I’ve never heard Dark Side of the Moon

One thing I learned early on is just what a slippery term ‘prog’ actually is. Each week I would choose an album that looked to be the proggiest prog record ever to emerge from Progtown, and each week someone would have a reason to question why I had chosen something that wasn’t really prog at all.

Finding the icebergs of prog in the broader ocean of progressive rock wasn’t easy; some weeks I’d end up listening to a fairly routine hard rock album that had been issued with a prog-u-like cover back in the day, presumably for marketing reasons. And then there are the subgenres – art rock, space rock, prog-folk, symphonic prog… and related genres like raga rock and krautrock.

A formulaic dictionary definition refers to ‘classical influences, the use of keyboard instruments, and lengthy compositions’, countered by the opinion that prog is about not having any stylistic boundaries. Some definitions are so broad they include work by everyone from Fairport Convention to Kanye West, which is almost the same as having no definition at all.

Technical arguments about the musical content that defines true prog keep fans up late at night hitting the keyboards – must there be technical virtuosity, narrative lyrics that aren’t just boy-girl stuff, shifting time signatures? Does any hint of blues-based rock mean banishment from the Courts of Prog? Maybe there is a perfect equation that can prove beyond doubt that a band or record is definitely prog, though finding it would be as tricky as an endless quest through a fantasy landscape with an infinite horizon painted by Roger Dean.

So I’ve developed my own reference points. I’m no expert: my eclectic listening is merely skimming stones across the topographic oceans of the form. Nevertheless I’ve heard enough to venture some views on what comprises the weird magical shiny beast that is prog, and what give it its undying appeal…

Prog is experimentation
Plug into the musical powerhouse of the first true prog album, King Crimson’s In the Court of the Crimson King (1969) and you’ll hear elements of jazz, classical, folk and rock as well as layers of Mellotron, passages of improvisation and avant garde noise. It’s the album used as a space for fresh new explorations – in this case making rock and roll with eclectic European influences rather than the normal basis of American blues. ‘Progressive’ indeed – there was nothing like it before and it opened up new possibilities.

Prog can take the listener into uncharted territory, which is not always a comfortable experience – this year I’ve spent time with the unsettling Baroque experimentation of Gentle Giant, had Magma testing the limits of musicality in my ears and followed Peter Hamill and Van der Graaf Generator into some harsh and unforgiving sonic spaces. And I’ve experienced the exhilaration of hearing unfettered creativity across the decades ranging from the expansive, quirky psychedelia of Gong to Guerilla Toss’ 2018 avant-prog art rock stunner Twisted Crystal. So prog is newness and experimentation. But at the same time…

Prog is nostalgia
There’s a corner of the record collection where it is eternally 1971. An exciting period when future classics appeared regularly – Emerson, Lake and Palmer’s Tarkus, Caravan’s In the Land of Grey and Pink, The Yes Album, Curved Air‘s Second Album, Jethro Tull’s Aqualung – the start of a golden age.

There have been many prog bands across subsequent decades and it is an evolving genre – but the pantheon of pioneering acts will always have a special place in people’s hearts. Anyone who has experienced a new genre forming around them as they grow up will know the feeling – this is your music and for a while every week brings a new development. No time will ever be quite as special.

There is definitely a prog nostalgia industry that taps into the desire to re-explore the classic period and it is thriving – box set reissues, anniversary tours, cruises, books and magazines all enable the cognoscenti to resurrect the thrill of early encounters with the form.

The years of the prog motherlode weren’t my personal garden of musical Eden; my nostalgia for an age yet to come will always be rooted in the punk era. But I can understand how it works, how it isn’t just the music but the whole flavour of the time and the feel of the culture that has a massive emotional pull. The richness of the material available in all media and generosity of the scene means you didn’t ‘have to be there’ – there’s plenty of people enjoying prog who weren’t born when Floyd (or even Marillion) first kicked off.

Prog is spectacle
Prog is the opposite of minimalism. You couldn’t have a prog skiffle band, except as some sort of exercise in irony.  Prog is unashamedly, exuberantly BIG – writing about King Crimson, Pete Townsend described ‘everything multitracked a billion times, and when you listen you get a billion times the impact’. Great prog is a fabulous artifice, ramped up and exquisitely decorated like a surreal Faberge egg.

To enjoy it you have to go along with this – make the choice to enjoy the flamboyance and show-offery – a choice that makes, say, ELP’s Brain Salad Surgery an absorbing, transporting 45 minutes rather than a seemingly everlasting self-indulgent hell.

And prog is theatrical. Elaborate visuals are a feature, the liquid lightshows of psychedelia evolving into vast pageants such as Pink Floyd’s inflatable pigs. As well as overblown stageshows wrapped around the musicianship,  individual performances take on theatrical aspects – Genesis’ Peter Gabriel enacting a ‘cosmic lawnmower’ is a form of front-man antics everyone needs to have in their eyes at least once.

Prog is a heroic age
There were giants in those days. Prog is the domain of the heroic figure of the virtuoso performer, whether it’s the technical brilliance and artistic range of guitarist Steve Howe, the continuing ability of Ian Anderson to play the flute standing on one leg, or Keith Emerson’s skill in extracting uncanny sounds from a Hammond organ while stabbing it with knives. Awe at accomplishment of mighty feats is a key element of prog fandom.

Prog is sci fi mythology
Prog as a genre is deeply infused with science fiction, fantasy and mythology. Images of unknown worlds and fantastic landscapes abound on album covers and act as a signifier of progginess, whatever the content. There are many examples of concept albums that draw from wells of fantastic literature, explore mythology or invent new legends to underpin a cycle of songs. For instance:

Many of these are better music than they are literature but nevertheless prog’s long love affair with legends and imaginary worlds is one of its distinctive features.

Prog is serious thinky stuff
‘The highest goal of music is to connect one’s soul to their Divine Nature, not entertainment‘ says Pythagoras (569 – 475 BC). ‘Challenge ACCEPTED!‘ says prog (1969 AD – present). Prog doesn’t shy away from the grand themes of philosophy and spirituality. Take Tales from Topographic Oceans by Yes, a double album featuring four side-long tracks that spin out a whole cosmology, travelling through layers of spiritual reality inspired by Hindu scriptures.

And there are plenty of other examples. Ars Nova crossed the boundaries of life itself in The Book of the Dead (1998).  Tool literally riffed on the mathematical sequences that structure reality and exploring ‘science, metaphysics and the myth of communication‘ in the 78-minute epic Lateralus (2001) while back in the day Kevin Ayers unpacked the mystical philosophy of guru G.I. Gurdjieff in Soft Machine’s Why Are We Sleeping? (1968).

Throughout much of prog there’s an implicit seriousness to lyrics and concepts – prog is a genre whose practitioners are free to play with expansive ideas, to be intellectual and poetic.  But at the same time…

Prog is big monumental pop
None of this would be much fun without some good tunes, and prog is full of them. Even in the supposedly bloated Tales from Topographic Oceans there are some great hooks. I’ve been surprised by the extent to which the prog landscape is punctuated by great accessible songs. Obviously, bands like Genesis and Marillion broke into the mainstream with radio-friendly fare. And Caravan’s Golf Girl is undeniably the greatest pop song ever to feature morse code and a bubble-blowing solo.

I survived my voluminous binge on prog by keeping an open mind and treating every album as if it was a brand new, hotly-tipped delight, accepting a level of comic grandiosity to reach some moments of cosmic grandeur. And I learned that there is no such thing as prog, except in the (third) eye of the beholder – just some music that ranges from derivative to brilliant, with a style and culture grown out of post-psychedelic experimentation, that offers endlessly-explorable possibilities.

So as 2018 comes to an end so does my year of prog. For the avoidance of doubt I’ve come through this year with a sense that a lot of what gets associated with the elusive term ‘prog’/progressive is immense fun. It has taken me into some fantastic places, real and imaginary.

I’ve listened to many hours of music – some baffling, some beautiful, some just plain weird. My musical literacy has increased – throw changing time signatures and unusual instrumentation at me these days and I’ll probably nod appreciatively rather than drift off to the bar.

Meanwhile, the practice of listening to an album each week as a long leap into something has been great. Maybe I’ll do it again in 2019 if I can find another subject. There’s this folksinger over in America, been going since the early sixties; he must have enough albums to fill 52 weeks. The guy won a Nobel prize so his stuff can’t be too terrible. Maybe I’ll give him a try…

Playlist: one track by every band I listened to. You’re welcome.