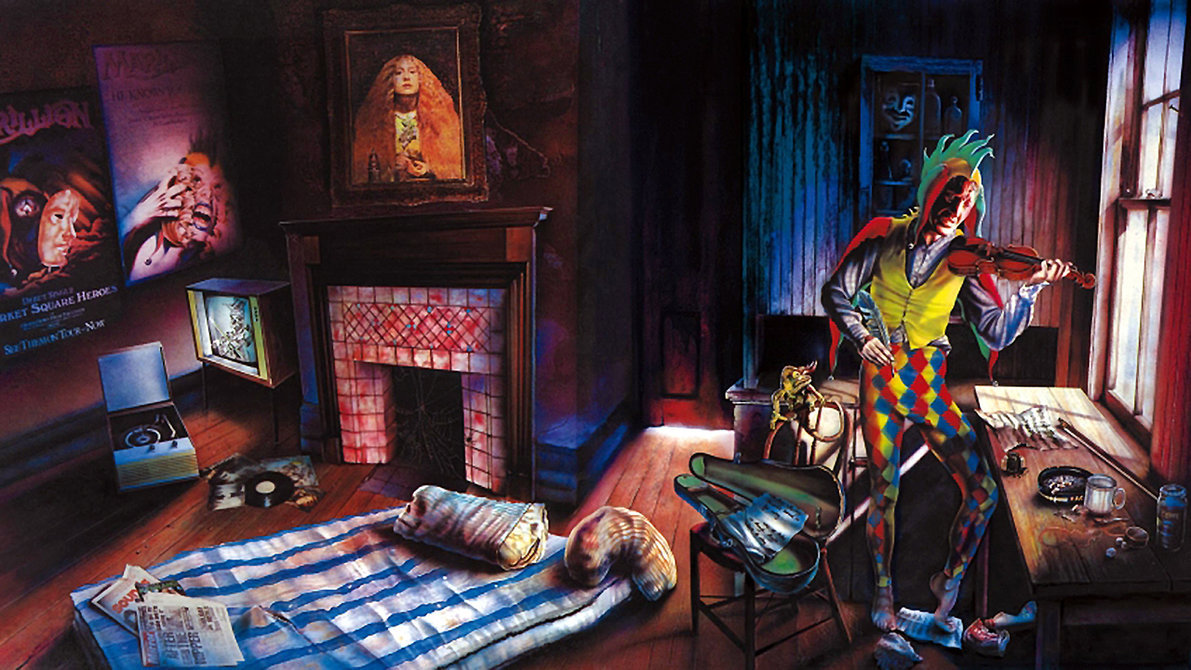 Marillion – Script for a Jester’s Ear

Getintothis’ Roy Bayfield experiences the depths and heights of unknown worlds of ’80s prog as his year-long odyssey continues.

I really wanted to like Marillion. Back in the early ’80s I’d seen ads in the music press for their debut album Script for a Jester’s Tear and been impressed with the audacity of the statement they were making. The mystically theatrical artwork, the Tolkienesque band name, the over-the-top album title – in the post-punk era this was all so bravely uncool as to be radically deviant.

There were clear symbolic nods back to Genesis and the progressive bands of the ’70s, which was the last place you’d expect a new band to be looking for inspiration.

Of course I didn’t go so far as to actually listen to it – I had enough on my plate with The Fall, the Birthday Party and the Cramps. I admired the concept from afar and maintained a mild curiosity as to what it sounded like. Obviously I heard the ubiquitous single Kayleigh that came out a couple of years later but their albums remained an undiscovered country.

So after all these decades, finally giving Script a spin felt like opening a box of chocolates unexpectedly found in the back of a cupboard. I was exactly half way through my year of prog listening – 25 albums already under my belt as previously recounted here in Adventures of a Prog Neophyte Part One and Part Two. Plunging into a rich and (to me) unexplored seam of music, looking forward to finding out what the 80s had to offer.

And… Script for a Jester’s Tear is very well done. Accomplished. Sounds like they mean it. It’s totally fine. But, somehow it didn’t connect with me. For the first time in this exercise I felt I was straining to enjoy what I was hearing. It has grown on me in subsequent listenings, but unlike the best of the ’70s works it didn’t cause my jaw to drop, the hairs on the my neck didn’t rise.

Undaunted, I proceeded further into ’80s UK prog. IQ, Pallas, It Bites, Twelfth Night. All impressive, carrying the torch in a showy ’80s way, nothing that made me want to rip my ears off. But still what I was experiencing was more a kind of admiration for what they were doing rather than full-on enjoyment. Reading about that era I came to understand that these bands were part of a neo-progressive movement, a fully-fledged underground scene, part revival and part its own thing.

So this was a genre deliberately formed, with a fanbase of dedicated followers. Maybe this is the difference I was experiencing – in the first half of the year I had listened to a disparate assortment of bands that fall under the progressive umbrella but who were largely developing in their own way with their own distinct influences. Now I was listening to a genre that had crystallised around the influence of those bands, with recognisable features such as lengthy instrumental passages, theatricality and concept-laden lyrics.

Jack Kerouac’s On the Road remains an essential read: sex, jazz and driving

A template had been formed. Nothing wrong with genres but somewhere along the line the wild expectation that every album could be something completely unprecedented had fallen away. I could see this was good but felt I was peering through a window into someone else’s dancehall.

With a sense that this year might prove to be less fun than I had expected, I contemplated the next six months of weekly listens. I decided it was time to go for broke and try and find the best stuff out there. Then if that sucked I could either declare the whole thing an ignominious failure, or press on and treat it as a masochistic exercise in character building.

Like a drowning man grabbing at floating wreckage, I reached for the most promising-sounding bands from the ’90s to the present day, based on friends’ recommendations and the prompts that surfaced regularly in my now-proggified online feeds.

Porcupine Tree’s 1995 album The Sky Moved Sideways was the first discovery from the next era. It didn’t quite lift me out of the gutter but at least I was looking at the stars again. Here were huge songs, beautifully atmospheric passages, eclectic grandiosity. Maybe prog still had the capacity to move me.

Listening to the The Mars Volta’s De-Loused in the Comatorium from 2002 was a darker revelation, an explosive and challenging listen, Latin and jazz sounds intertwining with blasts of noise, cut-up lyrics exploring the depths of human tragedy.

Tool’s Lateralus (2001) was on another plane altogether. Here was an album with the same sort of insanely overreaching intent as, say, Yes‘ Tales from Topographic Oceans. The 79-minute record seemed to be attempting some sort transcendental alchemy through progressive metal infused with playful metaphysics. I had joked about my third eye opening as a result of this type of listening, now here was a band who seemed dedicated to making that happen.

Emeralds‘ Does It Look Like I’m Here? from 2010 was an expansive hour, beguiling and multi-layered electronica, analog synths driving a beautifully eclectic cosmic exploration.

This phase of my protracted binge of skim-listening restored my faith in things progressive. I felt like I had crossed the abyss of the ’80s to arrive at a new landscape, an open space where music could be made to do anything. I was amazed I hadn’t heard more about this stuff – it’s like I’d been living obliviously through a secret golden age. I would never be an expert, but I had at least caught a glimpse of life beyond 4/4 time. Were these recent bands prog, progressive or something else? Was prog even a definable thing? This remained a mystery.

Meanwhile, vast tracts of the 1970s remained unexplored. I was restored with energy and enthusiasm, the metaphorical cape of prog re-draped on my shoulders.

Time needed to be found for Hawkwind’s pioneering spacerock, Gong’s trippy grooves, a lush return to Canterbury with Hatfield and the North… and many newer bands remained to be listened to; I still hadn’t arrived at Gandalf’s Fist… and weren’t there a lot more Italian groups I really should get around to? Who were the ones my mate Alan told me about, began with a C?… Suddenly the rest of the year seems too short – I will need some kind of time dilation device to experience the transcendent totality of this elliptical, elusive and possibly non-existent genre.

Somehow I will prevail. If prog has taught me one thing it’s that if you make an idea big enough, then add several layers of impossible complexity, increase the scope twentyfold and add an extra flourish, you just might succeed. By the end of the year I will know the secrets that lurk within all conceivable progressive recordings, and be able to pronounce on the insoluble mystery – what exactly is prog… and why?