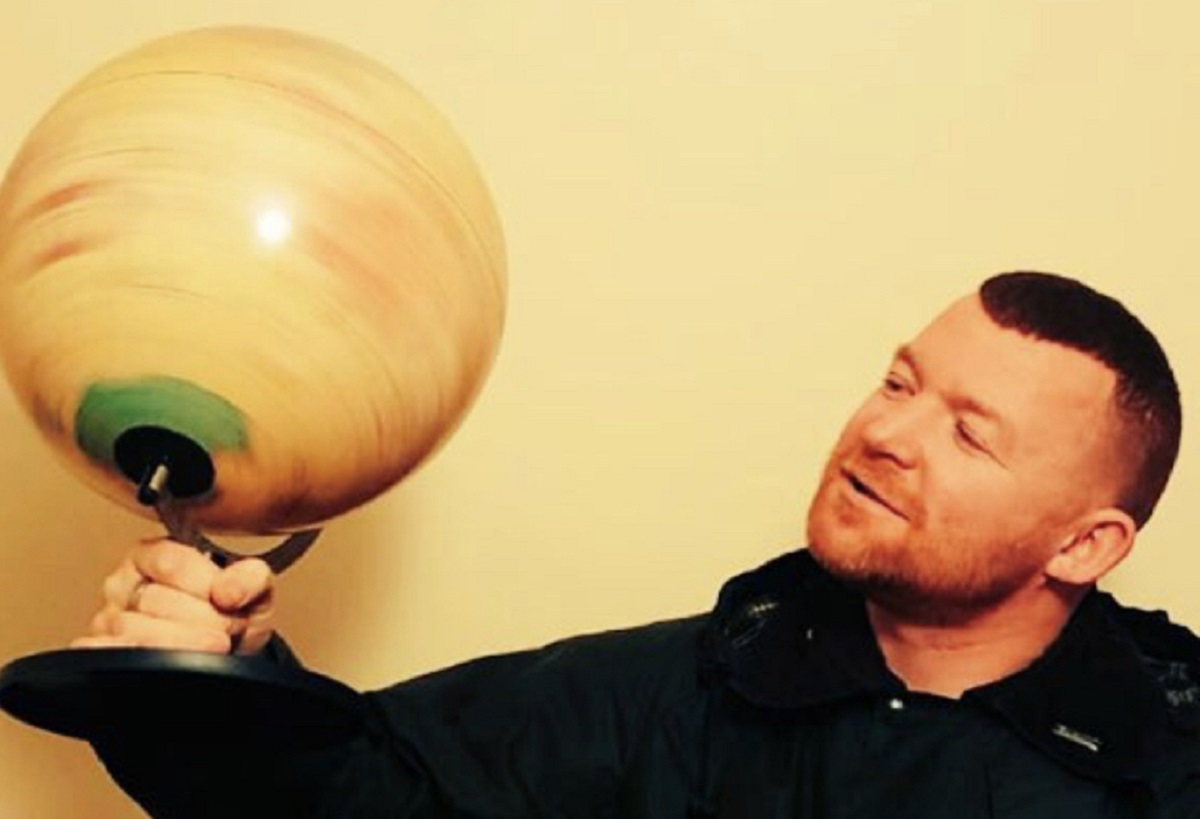 Roy is an enigma, yet he walks among us – he’s on the streets, on the stage, and on the radio and Getintothis’ Paul Fitzgerald managed to track him down to his hideout in the Dingle to try and find out more.

You’ll have seen the name. Roy. No surname and no explanation. Just…Roy.

Not one clue is given as to what he is, or who he is. His name probably isn’t even Roy. For all we know, it could be Keith. Or Jeff. But then, why do we need to know?

It’d be a little presumptuous of us to demand an explanation, anyway. He’s just Roy.

He does spoken word performances. He’s with us. He watches us. In some ways he is us. Maybe. Who knows?

All that’s really known of him is in the tales he tells, the observations of humanity at it’s best, and occasionally at it’s less than best.

We don’t know if these characters are real or imagined. They could all be him. It doesn’t really matter.

What matters is the way they react to each other and their circumstance, and how we react to them. How they interact with the world as they see it.

And this is what Roy, whoever he is, does best.

From Twitter we know that Roy is a good man. He runs a regular film night in the Tabac. He believes in helping others as he was once helped. He believes in second chances and inclusion.

In helping people get further. He believes in others in a world increasingly obsessed with self.

When negativity spirals around our everyday, he sees the positive. Unless you behave like a wool.

And he’s up for straighteners with anyone. Especially people who behave like a wool.

You’ll see him take the stage. Always in a decent pair of trainees and carrying his words in a series of notebooks in a blue carrier bag. The sort of bag you get from late night off licenses who still don’t charge you 5p.

At that time of night, it doesn’t matter, climate change goes out of the window. It’s all about getting that extra bottle of Echo Falls home safely.

Roy‘s dry, matter of fact delivery makes his characters rich and accessible, and their mad stories absolutely believable. There’s real honesty in these tales, even in the parts that don’t feel real.

Colourful, sometimes painful images that hold the characters in your mind long after him and his blue offy bag have gone.

You’re left wondering what happened next. And all of this only serves to deepen the mystery, to enhance the enigma.

So, we wanted to know more.

After a number of anonymous phone calls and a series of notes passed by lads doing wheelies on mountain bikes, we were able to track him down to his hideout, somewhere in the Dingle….

Getintothis:  Roy. Who are you and what do you want?
Roy:  ‘That’s a question I ask myself on a very regular basis. I’m sure there’s some sort of psychedelic, delusional chasm between who I think I am and who I really am.
Sometimes, in order to find out who I am, I have to first find out who I’m not. I’m not a beaut. I don’t have turn ups on my jeans. I won’t eat onions. I think you can be so far Left that you’re actually Right.
I haven’t got a telly. I’m oblivious as to what my purpose is.
I think that makes me a fragile, sensitive, arrogant overbearing creature…who’s trying to overcome his attachment and desperation to be liked by gobshites.’

Getintothis:  Where have you been all our life?
Roy:  ”Not sure really, probably stuck in that psychedelic, delusional chasm between who I think I am and who I really am. Otherwise known as the north end axis of evil: Walton/Kirkdale/Anfield.
I walked the constant tightrope of acceptance. A lad I used to hang around with fell off it, he got ostracised for using the word ‘whatsoever’, like “So no one’s got any bifters whatsoever?”
‘People thought he was trying to appear superior and clever. He got leathered, then jibbed. I think he’s on smack in Aberdeen now.
So, I’m here. Never elsewhere. Trying to understand the difference between obstacles and opportunities.’
Getintothis:  What’s in your blue offy bag?
Roy:  ”Chopped Pork, 4 cans of Oranjeboom, some Febreze, a nail clipper, Jo Malone fragrance, A King Baby checklist, found handwritten notes, a VHS copy of ‘Do I Not Like That?, a Paul Birtill poetry book and a packet of Doritos.
It’s an original bag from Duncan’s offy on Walton Rd. The only offy to ever give me strap. It’s from 1999. I’m not materialistic…apart from when it comes to that bag and my socks. There’s no excuse for shit socks.‘

Getintothis: The writing, live performance, 6Music appearances…Where did it all go so right?
Roy: ”Fuck knows. I first ended up on stage because Matt (Lockett, of Violette Records) just put me on the bill.

It was after watching one of our favourite poets, Paul Birtill, silence 300 people – at the first La Violette Società. Live performances of my stories had never occurred to me.

I did it. I liked it. So did the audience. I’m not a good writer. I’m a good storyteller. I could get good at the writing bit though, you never know?

It was only after watching Toria Garbutt, John Cooper Clarke and Mike Garry at Bridgewater Hall, late last year, that I thought I could focus a bit more energy into this. Hence, the support slots with mates bands.

I buzz off holding the attention of a Saturday night gig crowd. The 6Music thing as a result of a London gig at The Heavenly Social. Shaun Keaveny hosted the night and liked what he heard.

As a direct result of that, lots more people got into it, so I’m getting plenty of gig offers.

Which means I have to write more. I sometimes forget about that.’

Getintothis: The characters in your tales, are they real, imagined or really imagined? And in telling their stories, are you hero or villain?
Roy: ”It’s my version of real events. True fiction.

Surprisingly, I’ve only had one person confront me so far – and he was way off the mark. Nobody really spots themselves anyway.

Even if they do, their ego won’t allow them to let on that they identified with a deeply unpleasant, hapless character.

Roy is neither hero nor villain. He’s just a conduit for the uncomfortable thoughts of our innermost selves and the light of day. Whatever you do in the dark, always gets revealed in the light.’

Getintothis: Is the writing process cathartic for you? It seems like there’s an emotional release for you in the telling of these stories.
Roy: ”Nah, it’s painful the majority of the time. Similar a trip to TK Maxx. Wading through rails of shite, then you eventually find a Paul Smith shirt for £12…which makes it all worthwhile.

Pretty much like life itself then really. I’ll tell you what can get emotional though – people’s reactions to the stories.

I get collared as soon as I come off stage. Usually by bevvied people who don’t understand that it’s not completely factual.

The ‘Whose Coat Is That Jacket?’ always provokes a strong response. My only rule for writing is: Ignore all rules for writing. Just write and trust.

I’m from the Andrea Dunbar school of thought – write what you know and what’s said. That way, it’ll come. Always.’

Getintothis:What about the performance of your work? What has that given you that you didn’t have before?
Roy: ”A belief that people do want to listen to stories. I genuinely had no idea that spoken word nights could be so popular and impactful, mainly because most spoken word is fuckin shite.

Getintothis: What’s next? The Book Of Roy?
Roy: ”I’m making it all up as I go along. My plans don’t evolve past keeping on writing and gigging, then seeing what happens.’

Getintothis: Define Wool
Roy: ”Impossible. It’s more of a mental state than a geographical one.

I will tell you this though, some of the WERST Wools I’ve ever met are from Libpewl. Embrace your inner wool. Acceptance is the key.”

Roy. He’s not a beaut and he won’t eat onions. He’s not shite.

Acceptance is everything and he deals in true fiction. He writes what he knows, and he’s desperate to be liked by gobshites.