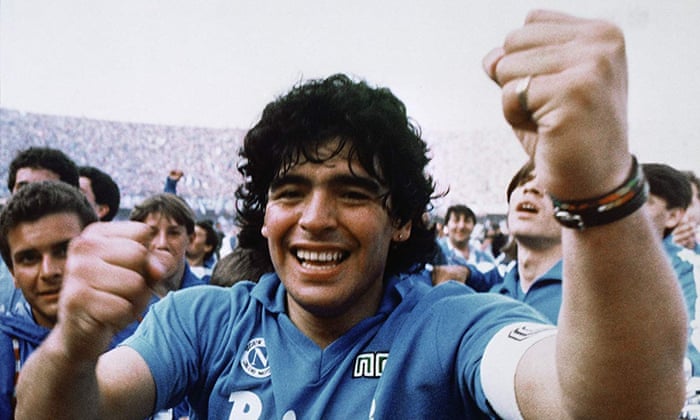 Maradona is the latest documentary film from Asif Kapadia, Getintothis’ Mark Flannery marvels at his depiction of Diego.

For those of you who were born after 1990, it’s hard to comprehend a player arguably both more stylish, more tenacious, more driven than both Cristiano Ronaldo and Lionel Messi combined.

That player, and man, is Diego Maradona.

In Asif Kapadia’s third portrait of an artistic genius (following Senna and Amy), he successfully gets to what made Diego Armando Maradona such a loved and in equal measure, loathed sporting icon.

It begins with footage of a high-speed journey through the streets of Naples in the summer of 1984. The camera follows a battered old Fiat as it eventually reaches the bowels of the San Paulo, home to Napoli.

Out comes Maradona, the Argentinian enigma, ready to be paraded in front of a packed stadium, it’s fans desperate for him to bring much needed silverware to a success starved Serie A club.

Kapadia fashions a fascinating study of a brilliant footballer and flawed individual using over 500 hours of footage, from the slums of 60’s Buenos Aries to modern day Mexico, where the film’s protagonist now resides.

Maradona as he is now, is never seen talking on screen, but nevertheless Kapadia has persuaded him to use his voice to add to those closest to him, who help describe his ascent to the pinnacle of both Italian and world football and sadly, descent to a cocaine addicted World Cup winning captain.

The film acts out as an incredibly well observed Greek tragedy, showing the combustible relationship between Maradona, the city of Naples, it’s football team’s fans, and not least, the Camorra, Naples’ very own mafia.

One couldn’t help cheer for the man from Villa Fiorito, who on signing for Argentinos Juniors at 15, was given an apartment and became the family’s main breadwinner, having his family move in with him.

The footage at Napoli matches show the brilliance of the man, his short stature aiding a low centre of gravity, frequently bamboozling opponents, as he drove Napoli to their first ever league title in 1987.

However, the suffocating feeling Maradona felt in the city, drove him into the arms of cocaine, which kept a hold on him for much of the rest of his life.

His relationship with the Camorra, who supplied the drugs, became a stick with which they began to beat him with, having balked at the spotlight in which the Argentinian brought them.

His love for his family never wanes, and they all add their feelings of pride, adoration and frustration towards him throughout the film.

Kapadia brings a sense of wonder and fascination to his subject, using footage, even in these days of YouTube, which can take the breath away.

As a companion piece to Senna and Amy, Diego Maradona is a documentary film which cements the reputation of Kapadia as the director who seems to get under the skin of his protagonists, showing all their individual brilliance and flawed genius.