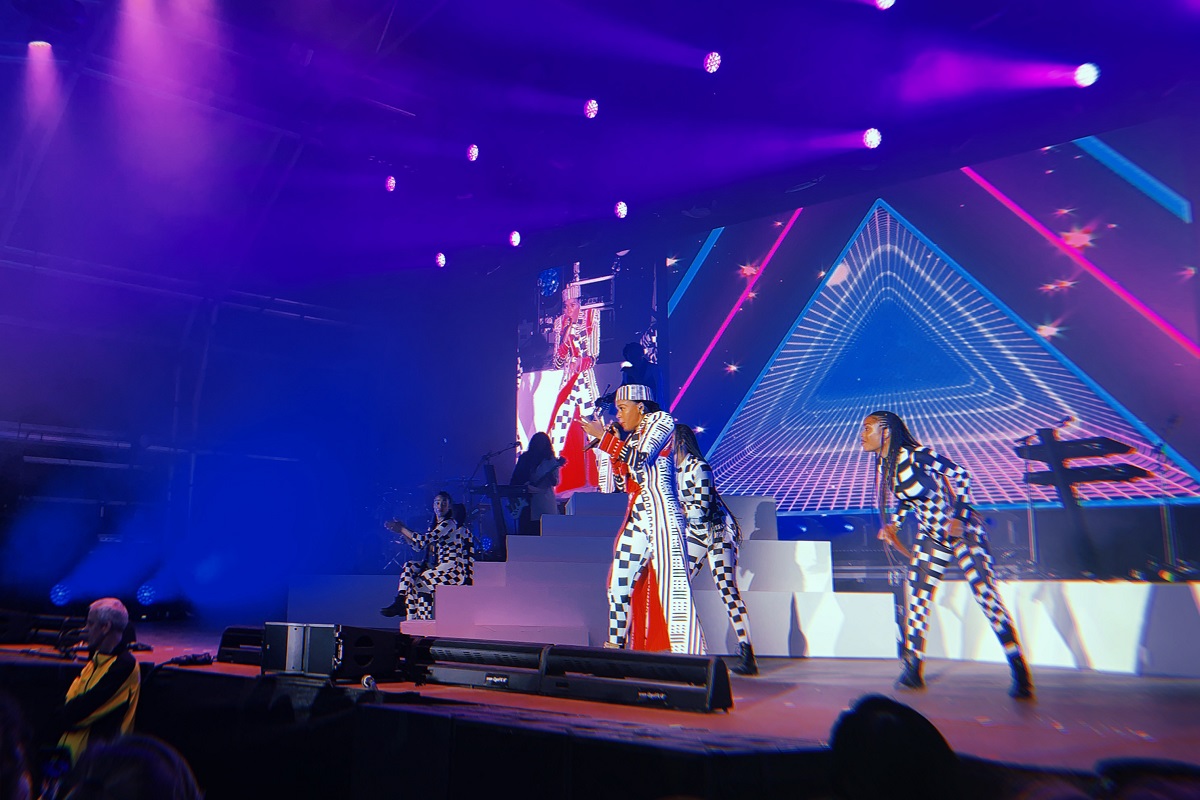 Chock-full of independent films, concerts, and talks from legends like David Lynch and Yoko Ono, Manchester International Festival is one of the more eclectic festivals that you could find yourself at this summer.

And Janelle Monae was sure to set the bar high with a show just as passionate as the fans that adore her.

Adorned in a military inspired get-up, Monae marches up the steps onto a platform on the stage for all to see and gets straight into it with the fan-favourite Crazy, Classic, Life, from her latest Grammy nominated record Dirty Computer.

It was this record that gave her greater commercial success, but something tells us this crowd has been following her for much, much longer.

The politically outspoken artist has built up an incredibly loyal fanbase since her debut over 10 years ago, partly because her message of self-love and inclusion is so loud it would be harder to resist it than it would be to submit.

The whole show was carefully infused with messages of love and acceptance, with just a hint of ‘fight the power’

“Impeach Donald Trump!” she bellowed after delivering a message of support for all who are marginalized across the world. This, as you can imagine, was well received.

As she closed her self-empowering anthem I Got the Juice, Monae scoured the crowd for fans to come on stage and show that they also ‘got the juice’.

“You got the juice?” One by one the fans took turns dancing and twirling round the stage to a crowd that were just as uplifting as Monae herself.

This show was expertly crafted to exhibit Monae’s best assets: her voice, her moves, and her ability to perform in a way that only very few can.

If her songs weren’t enough to sell you, her powerhouse vocals sure will, and if that’s still not enough, just watch her dance.

A Rockstar at heart, it’s not long before Monae ends up tangled up in the crowd.

In a wonderful display of weirdness, she gestures for the entire crowd to squat down during her encore Come Alive.

Stripping out of her costume down to a simple black tank top and leggings, the barefoot star jumps the barrier and tiptoes through the silent, squatting crowd.

“Go!” she screams, and the crowd jumps up and the petite pop star almost disappears, but even those that can’t see her can most definitely hear her.

There is something enigmatic about Monae, a star that knows her power and talents and is never shy to show them, yet humble with the ability to bridge the distance between star and fan.

The audience were treated to an unforgettable experience to open the festival, and you get the feeling next time we may be seeing her take on arenas right across the country, as clearly this pint-sized popstar is built for not-so-pint-sized audiences.