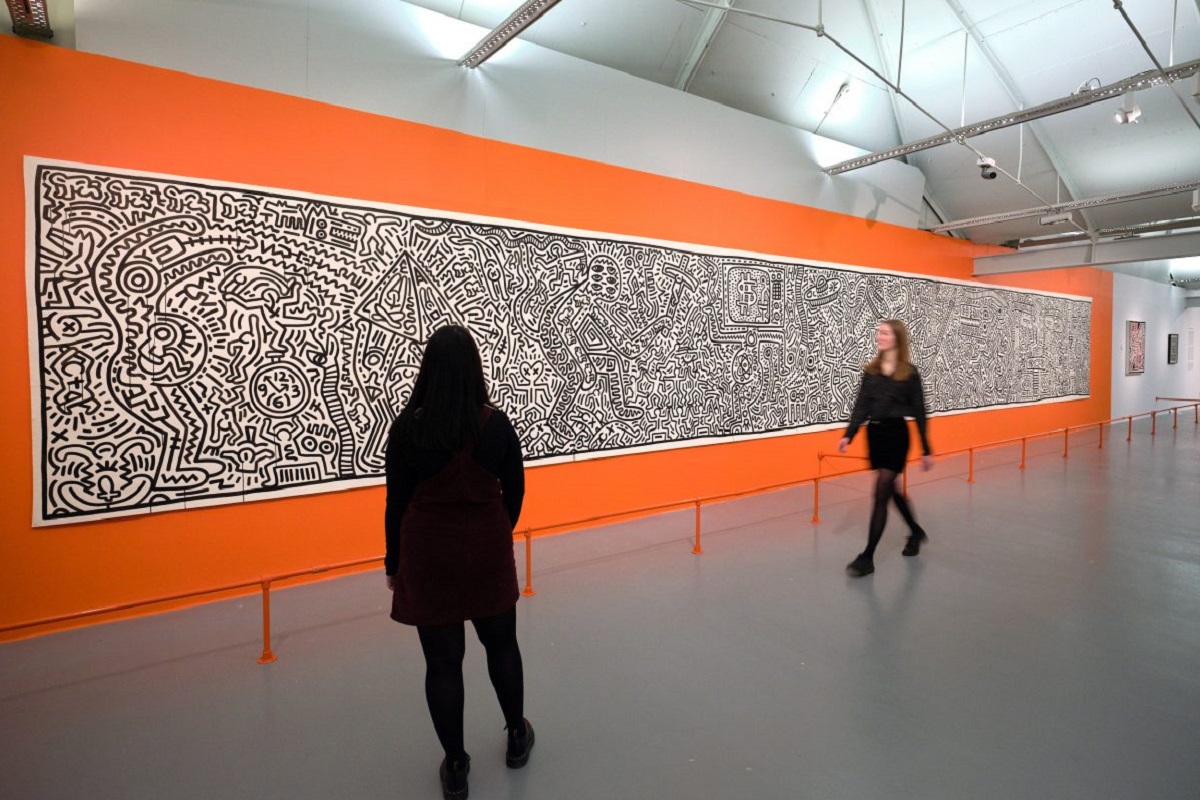 As the Keith Haring exhibition opens at Tate Liverpool Getintothis’ Michael Maloney takes a look around to explore the work of a remarkable artist.

It’s fitting that the Tate decide to launch the Keith Haring exhibition in June, June being the month of Gay Pride and it’s hard to think of an artist who pushed harder for equality, unity and love.

It also feels more of a grander statement than simply splashing your logo on to a rainbow flag which so many companies do these days in the hope of appearing as an open and accepting corporation so long as it brings them more money their way.

Keith Haring was an artist whose work reflected his life; full of energy, joy, humour and open to everyone and the retrospective of his work at the Tate Liverpool reflects this.

The exhibition opens with his student work including a video of Painting Myself into a Corner, here we get see how Haring‘s style developed and who his main influences were – mainly Andy Warhol and Roy Lichtenstein.

There’s also the joy of seeing an artist at work and with Haring there was definitely a performance to how he made his pieces moving quickly, acting on instinct, swirls here, straight lines there and before you know he’s filled a vast canvas.

Keith Haring: the activist artist with an undimmed legacy

Moving on we come to the street art section which includes some of the last remaining chalk drawings Haring created on empty subway billboards along with his foray into collage of William Burroughs-esque ‘cut out’ style headlines which he would photocopy and attach to lamps.

Credit should be given to the exhibition design team who have helped create a sense of place around the artworks.

The aforementioned street art section is held in a darkened area while a video plays clips of graffiti artists and blast hip-hop it all helps to create the feeling of being down on a subway platform and later on a club environment is recreated with videos installations and more music.

Where ever you look in the exhibition you’re confronted by thick black lines, bright colours and in your face messages.

A figure with an army tank for a head burns money, a figure stabs another while the same scene plays on a TV in the background, you don’t need an undergraduate degree in Art History to work out the meaning behind these pieces.

But that’s the point, this art is accessible and anyone can engage with it. 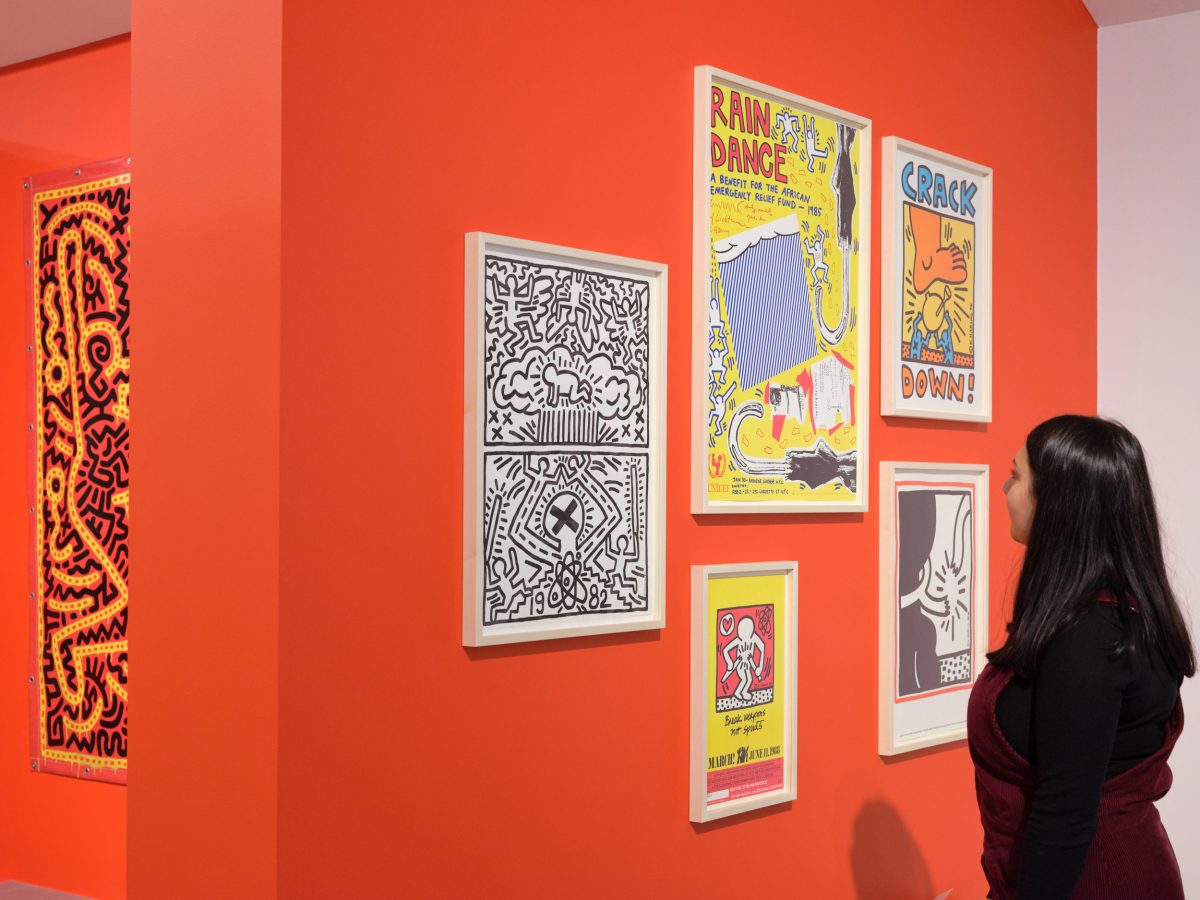 During my visit I encountered numerous families some with teenagers other with small children but all of them appeared engaged with the artworks, the teenagers posed in front of canvas no doubt doing it ‘for the gram’ while the kids ran around trying to decide which piece is their favourite.

You don’t usually get these reactions at art galleries but it shows how Haring‘s work crosses generations which is what he always intended his art to do.

One of the video screens plays a clip of Haring working with children from New York on the CityKids Speak on Liberty mural and shows the joy both Haring and the children experienced working with each other.

The club section which focuses on the scene down at Club 57 is one of the most humorous parts of the show.

Alongside the flyers, posters and invites Haring created for his shows there is a selection of nude sketches, featuring man on man, man on woman and even dog on man. The short video pieces Bang and Tribute to Gloria Vanderbilt, Pt 2 both look and feel like Haring is enjoying himself experimenting with the video format.

In the second of the two rooms the 30-foot mural, The Matrix, takes centre stage.

Filled with swirling lines, radiating characters and dancing people its an overload for the eyes as you try to take it all in. Thankfully there are plenty of benches placed in front of it so you can sit down and work your way across taking in bit by bit. 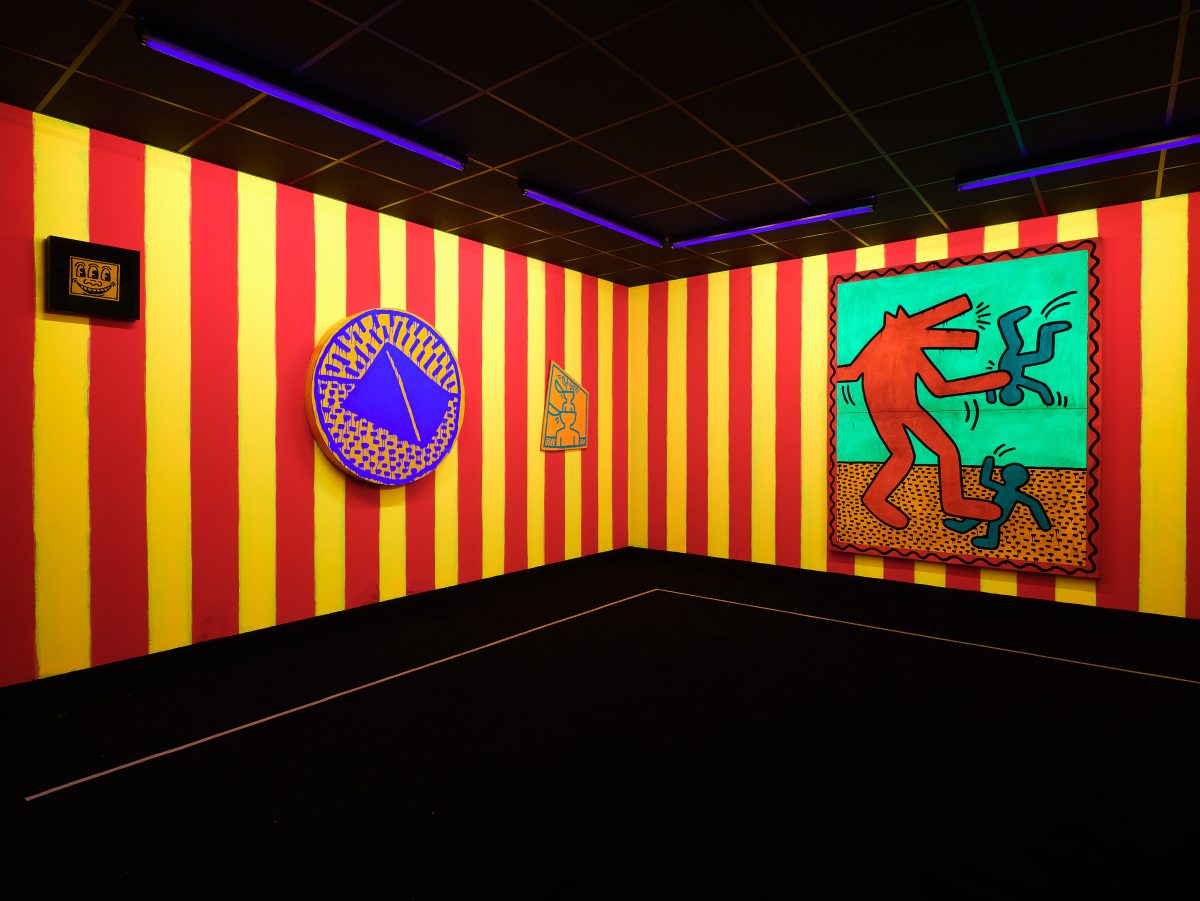 The other stand out section in the second room is the Black Light Room. Set inside a UV lit room is a series of painting that Haring created using dayglo paint combined with the UV light they’re even more vibrant than his usual output, add in the dance music that’s pumped into the room and you get a version of what a Keith Haring night club might have looked like. I’d certainly go there that’s for sure.

The final part of the exhibition deals with Haring facing up to his own mortality after being diagnosed with AIDS and his involvement in ACT-UP.

Here we see a change in his style, specifically with one large red canvas which feels a lot more considered, the brush strokes more thoughtful and the tone a lot darker and bleaker than we’re used to expecting from Haring’s work.

Looking back at the exhibition it’s hard to imagine that all this art was created in a 10 year period.

It’s almost as if Haring knew how finite he life was and he wanted to put his stamp on the world before his time was up.

This feeling flows through his work the immediacy of the messages almost feels like he’s saying “I don’t have time to explain it to you the message is clear!”

And the messages all revolved around the universal themes of hope, love and equality, times may change but these messages will always be relevant and so will Keith Haring.