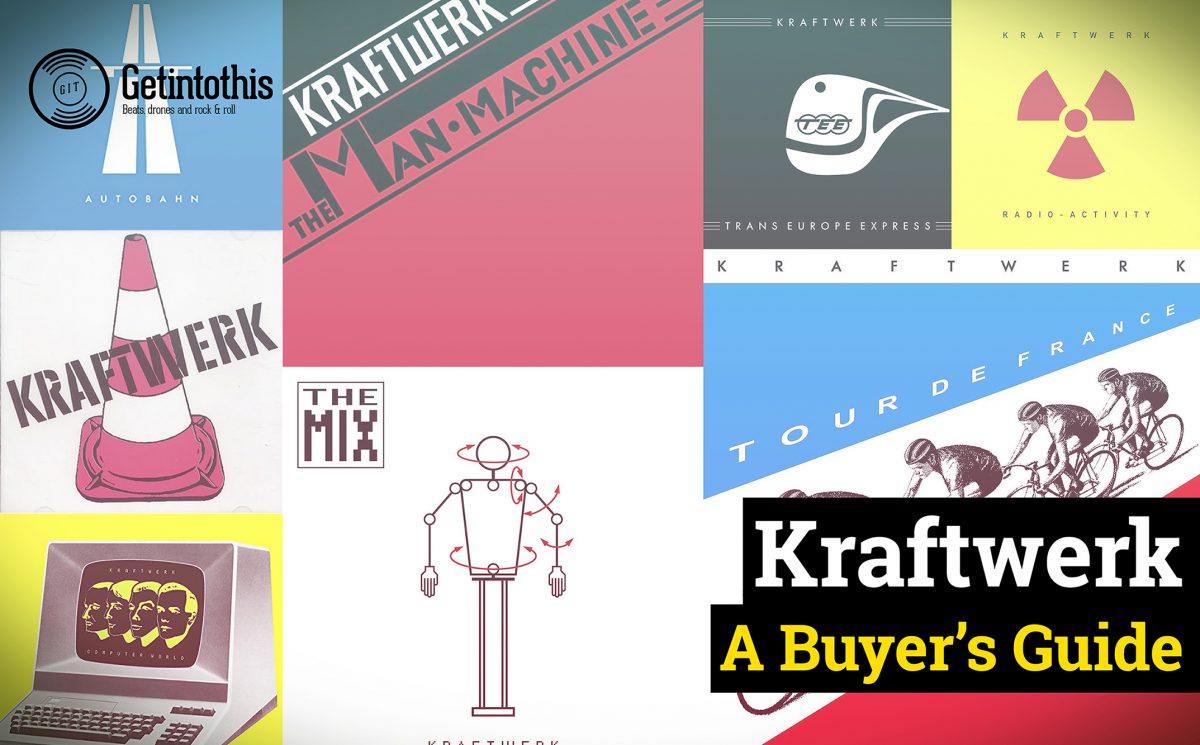 Kraftwerk are set to headline Bluedot Festival 2019 and Getintothis’ Keith Ainsworth looks back at one of the most influential bands of all time.

The Beatles aside, no other band has influenced modern music more than Kraftwerk.

You take Kraftwerk out of the equation and the bands they influenced don’t exist, the technology doesn’t advance and dance music doesn’t go mainstream at the end of the 1980s. Modern music truly would not be the same.

Kraftwerk formed out of a music scene based in Düsseldorf, Germany at the start of the 1970s.

With time they moved in a more electronic direction and new musician Wolfgang Flur joined them fulfilling the role of electronic drummer. Sporting a pair of thin sticks protruding wires he would trigger artificial drum sounds when they made contact with silver discs arranged on a base.

In 1974 these developments came to fruition when breakthrough album Autobahn was released.

This was a time when synthesizers were monophonic (i.e. only capable of playing one note at a time) and drum machines were simple home organ accessories.

Side One of Autobahn is a 22 minute piece of such supreme atmosphere that you are transported and enraptured from the start. Not a note is out of place. Every sound is carefully chosen. It is a road trip across Germany and the future starts here

If you think it sounds other worldly now imagine what the British music fan raised on blues based guitar rock thought about it in 1974.

Side Two is also worth checking out for Kometenmelodie 2 plus the beautiful Morgenspaziergang which sees the last use of acoustic instruments such as Schneider‘s flute.

There’s a wonderful contemporary clip of the band on BBC TV show Tomorrow’s World to give you a taste of the band at this time with a uniformity of look and wonderfully each member has his own neon sign. The album went to number 4 in the UK and an edited version of the title track got to number 11 as a single.

By 1975 Karl Bartos joined them to complete the classic four-piece line up of the band.

Surprisingly Kraftwerk were always eager to tour and came to Liverpool that year playing at the Empire.

It was here that future OMD founder Andy McCluskey saw them play. He told the Telegraph that ‘they came out looking like four bank clerks with electronic knitting needles and tea trays.’  This collection of equipment was building up and from now on the band would record in the privacy of their own Kling Klang studio.

In October 1975 they released the album Radio-activity.

The hyphen in the title indicates this was more nostalgia for the early years of radio broadcasting rather than radioactivity.

However, being Kraftwerk they have it both ways and when the title track was remixed as a single in 1991 they stressed the anti-nuclear power aspect of the piece.

This album should be taken as one complete experience rather than cherry picking tracks.

More touring followed and they gained David Bowie as a fan. The track V-2 Schneider on Bowie‘s Heroes album was named in tribute to them.

Trans-Europe Express rolled into shops in 1977.

A more rhythmic experience than their previous output, this album was the start of a great run for the band.

Here the balance between the tunes and the technology is perfect.

There’s not a poor track on the record. Showroom Dummies is the stand out song which tells the story of shop mannequins coming alive and escaping to a nightclub. The album track Hall Of Mirrors was covered much later by Siouxsie and the Banshees.

A trend to note is that Kraftwerk tend to blend the past and the future. Here it was the romance of past train travel with an eye on modern technological advances.

1978 brought The Man Machine with its image defining photo of the band in red shirts and black ties.

Possibly the most consistent album by the band, it starts with The Robots (not a hit at the time but no.20 on its re-release in 1991) and contains the elegiac ballad Neon Lights.

But it was the perfect pop song The Model that shines here. Lasting just 3:38 not a note or a sound is wasted. A beautiful melody, a great lyric, a perfect arrangement. This was the template for 1980’s pop music.

Computer World from 1981 shows what a prescient band Kraftwerk were. Permeated by themes of a life surrounded by technology are optimistically expressed. From Pocket Calculator to Computer Love this is many a fan’s favourite collection of songs. 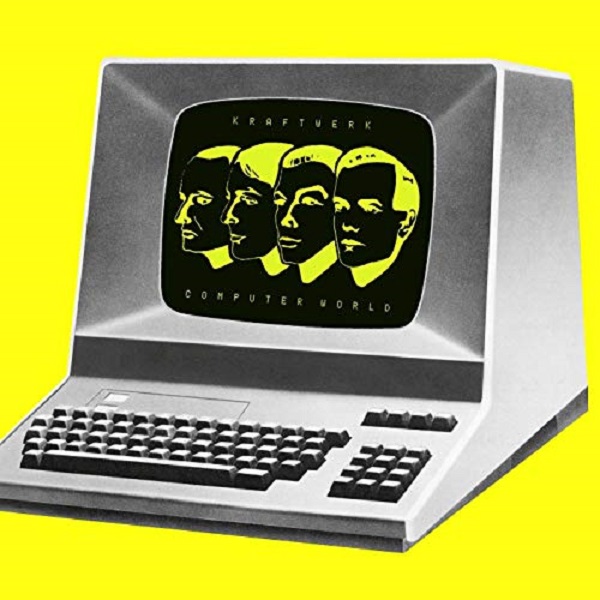 The whole thing drips with melody and hooks. The world was now listening and this was a big seller.

It was now that all the momentum paid off as the The Model / Computer Love single finally became a huge hit reaching number one in the UK and once again the video for the song used vintage black and white footage of models rather than contemporary styles. 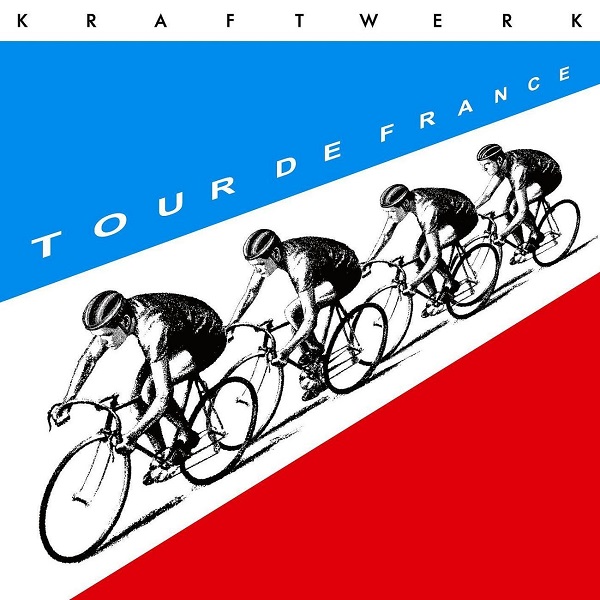 The song reflected a new passion of the band – cycling.

It was said their tour bus would stop ten miles outside of the destination and the members would cycle the final distance into the city. Imagine witnessing that!

Using sampled sounds of bikes and riders to create the rhythm this is peak Kraftwerk. The following year the song was used for a sequence in the hit Breakdance movie.

However, the expected album to follow this single never appeared.

The album (which had been allocated an EMI catalogue number) vanished from the schedules and was followed by years of silence.

Legions of synth bands had taken the foundations of Kraftwerk and built their own careers at the start of the 80’s. Were the original pioneers beginning to question themselves?

The wait ended in 1986 with the album Electric Cafe.

Not a poor album in itself but it just doesn’t have the magic we had come to expect.

The single Telephone Call has its moments but the whole work just doesn’t engage. Wolfgang Flür left the band the following year and the now familiar silence followed as the band worked in secrecy at their Kling Klang studio. Famously the studio had neither a telephone or a door bell. Frustrated with the glacial pace of studio work Karl Bartos also left in 1990.

In 1991 a new album named The Mix emerged and this contained re-recordings of their most popular tracks.

As an alternative to a greatest hits package this disappointed me at the time. I was hoping for new material and the new versions are very close to the originals. Yet listening to it recently reveals some new arrangements and great audio quality.

This would make an excellent introduction for those new to the band.

These new versions formed the basis for the live interpretations the band played. They didn’t exactly tour in this era but popped up for one-off events. I myself saw them in Paris at Cité de la Musique (a museum for classical music instruments) in September 2002.

Krautrock: finding beauty in the brutalism

During the 1990’s there was no new material until right at the end of the decade when we got the disappointing single Expo 2000.

Then out of the blue in August 2003 they released Tour de France Soundtracks, their first album of new material since 1986.

This is an audiophile gem that can test just how low your speakers can really go.

Melody-wise though things are a bit thin with only the track Vitamin being a bit of a grower. With two new members maintaining the classic four-piece look they started a period of proper touring and released the live CD Minimum-Maximum in 2005.

With Schneider leaving the band in 2008 the sole original member is now Ralf Hütter.

Playing festivals and undertaking small tours now takes up their time and revisiting their old catalogue led to them performing groups of eight concerts in one venue showcasing each of their core studio albums. The visuals now require the audience to wear 3D glasses and these concerts spawned their 2017 live album 3-D The Catalogue.

They returned to Liverpool in 2017 to play a wonderful concert at the Philharmonic Hall. 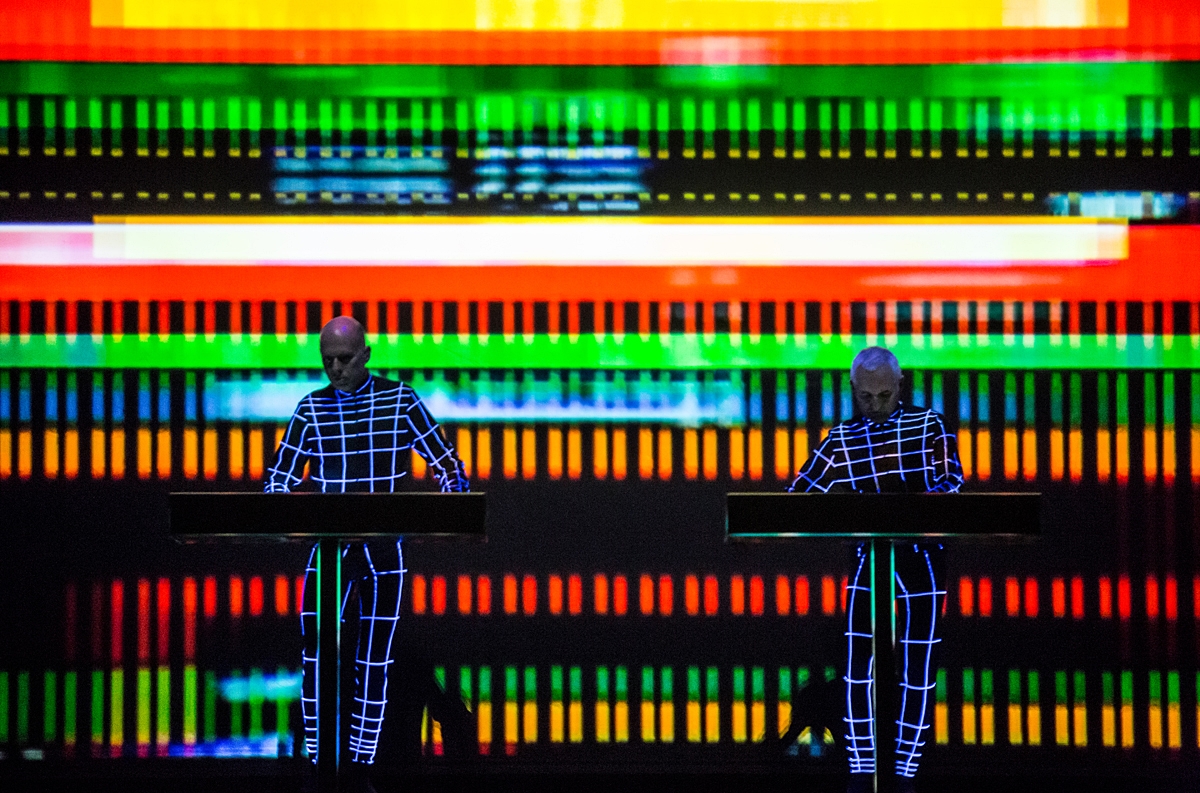 For an encore the band left the stage and when the curtains parted four mannequins of Kraftwerk stood in place of their human counterparts. They ‘played’ The Robots and when the song finished no one thought it strange as we all applauded the mannequins.