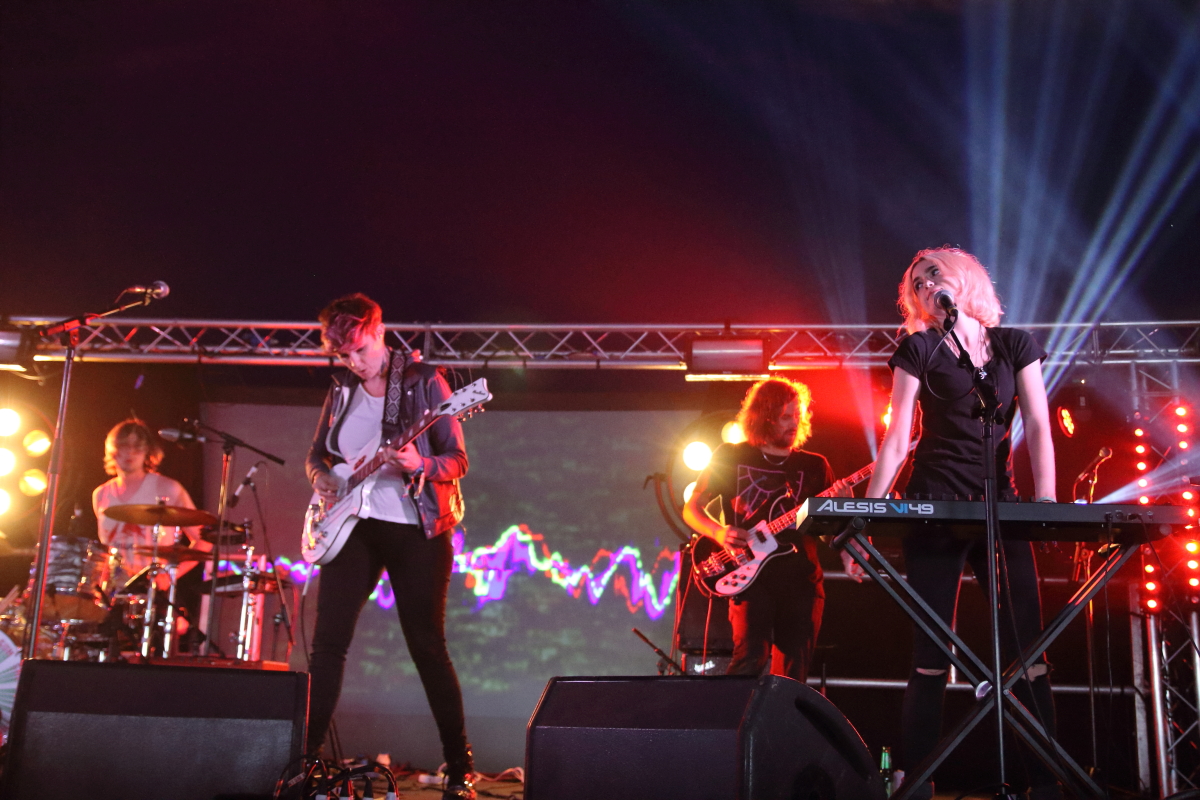 She Drew The Gun took a trip up the M6 to play an intimate pub gig and Getintothis’ Jane Davies was there to soak up the unique atmosphere.

The Ferret is a hostelry, smokehouse restaurant and mini gig venue rolled into one.

Arriving too late for early doors support Granfaloon, Mamatung were about to begin.

How do you describe Mamatung to the unitiated?

Well if Stonehenge held a festival, Mamatung would be the headliners; rocking the ley lines and making the sacred stones tremble to their unique freak folk/ psych folk beat.

Mamatung opened up with their latest single Border Barrier, a song even more poignant in these pre apocalyptic Brexit times.

Mamatung are as interesting visually as they are to listen to as they tackle a curious array of unusual instruments such as the cajon (box drum) , melodica (mouth organ) and autoharp (a type of zither).

A Tibetan singing bowl leads us into a song about being helplessly plugged in to the digital age before the base kicks in and bounces around the walls and floor of the venue.

An ukele sets the pace in Howl which is suitably rounded off with a whole lot of howling by the band and no complaints from the respectful, if not fascinated audience.

Skeleton Coast Festival: six of the best for Leasowe Castle

As She Drew The Gun take to the stage, it becomes obvious that the now packed out venue is possibly the smallest one in existence.

It spans just three body widths across from the end of the stage to the bar area and for the duration of the set there is no feasible through route to the bar or toilets upstairs.

Poor room configurations aside, the audience will have to cross their legs and go without a drink for 75 minutes. The set opens with Resistor, title track of their latest album.

Paradise is introduced as “the capitalist paradise, but let’s make it alright for everyone!” to the sound of loud cheers and some less than complementary observations about the Tories.

Singer Louisa Roach introduces a new song, Trouble Everyday by remarking that there is going to be trouble everyday if the powers that be “don’t sort their shit out”.

This new song is a fast and furious mix of semi-spoken word set amongst a back drop of equally fast and guitars.

Revolution of mind stirs up the anti establishment sentiments further.

Perhaps it was my vantage point in the room, on the outer limits of the room, but for every song, bar the slower, quieter songs such as Poem, Since You Were Not Mine and Wolf and Bird, the drums seemed much louder than usual, along with guitars, blotting out the ability to home in on the lyrics, which are intrinsic to the music.

Audibility issues aside, this was a tight set, proving that endless back-to-back festival appearances this year have further developed this band to the slick outfit that they are now.

As Pit Pony gallops in we are invited to open up a mosh pit and Mamatung band members oblige, leading the way.

At the end of Malvina Reynolds’ No Hole In My Head, we see the band off by spilling out into the pavement.

Louisa returns alone with her Thank You tribute to inspirational female artists, before the band reunites for the cover of Sweet Harmony by The Beloved.

We certainly did come together in a friendly Northern town, rather intimately at times in this tiniest of performance spaces.

You might have needed to be as thin as a ferret to get around the bar mid-performance, but it was certainly an evening of harmonious and diverse music with strong messages which were received and understood.