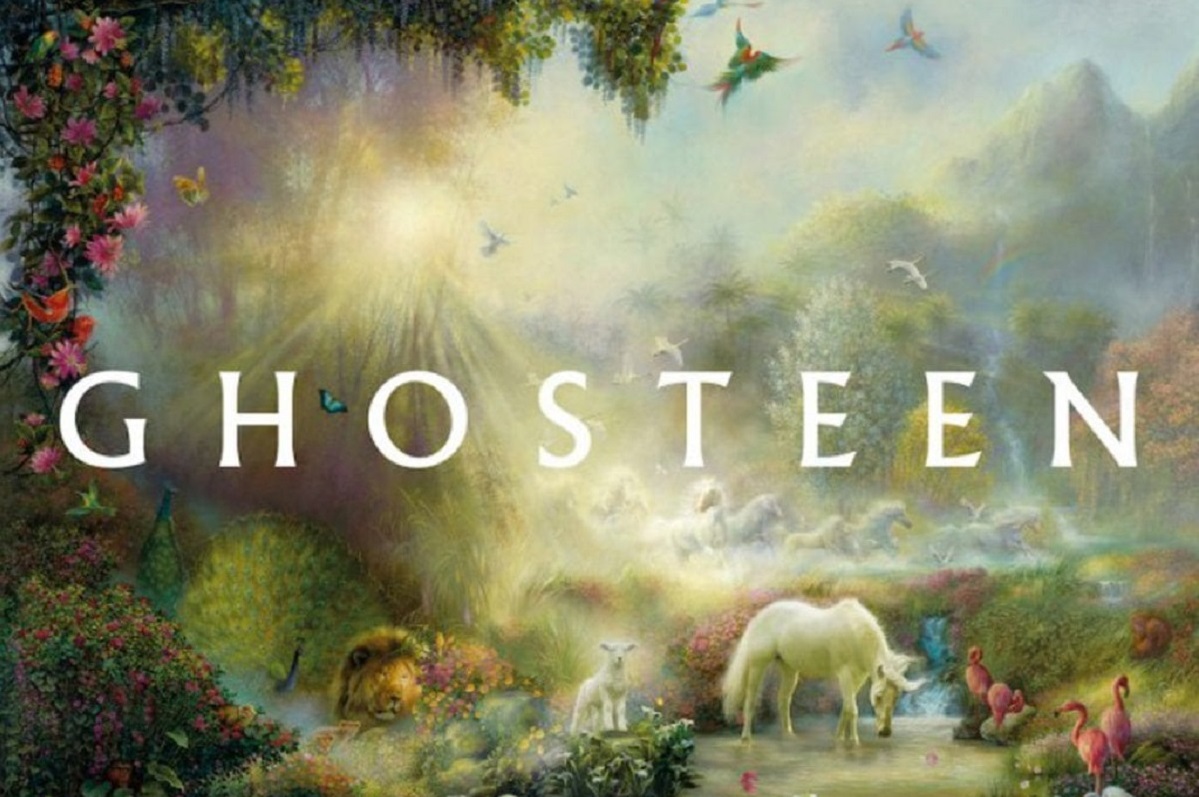 Nick Cave returns with an album full of soul-bared emotion with Ghosteen, Getintothis’ Banjo looks at a modern masterpiece.

Nick Cave’s 17th album Ghosteen does not have an easy job.

It simultaneously has to continue the career-best run of form started with Push the Sky Away and continued with Skeleton Tree, which is no mean feat given the incredible peaks reached on those albums.

But, more pertinently, it is the first album Cave has written since the tragic death of his son Arthur in 2015. Where Skeleton Tree was seen to be Cave’s expression of grief, it was largely written before what Cave refers to as ‘the trauma’, but recorded after it.

Some of the aftermath crept its way in to the songs and lyrics as they were recorded and Cave’s voice, sounding too tired and threadbare still razes me to the ground every time I hear it.

At his Q&A in Liverpool in June, Cave said that recording Skeleton Tree so soon after his son’s death was, in retrospect, ‘a mistake’, but it set course of Cave’s future in motion.

There followed a very public exposition of grief that included Cave setting up the Red Hand Files website with the instruction ‘ask me anything’.

This was followed by the above mentioned Q&A tour and Cave did something incredible; he opened up; previously a taciturn individual, Cave discovered the value of talking.

As a result, he came to the conclusion that there was a ‘river of grief’ running through the world, and that he and his wife Susie were but a part of this torrent, acknowledging that ‘basically it saved us’.

But if the recording of Skeleton Tree captured the immediate life changing impact of events, Ghosteen is the considered response, where Cave has had time to process the events and, in turn, to repsond to them.

It inhabits the stages of grief after the initial shock has worn away, where what remains from the whirlwind is what you will have to live with for the rest of your life.

Ghosteen is a double album, with disc one containing the ‘children’  songs, and disc two the ‘parents’. Although disc 2 only contains 3 songs, it lasts for over 29 minutes.

The distinction between the two discs does not mean that one is about children and the other about parents, but seems to be more about how Cave feels about the songs.

Maybe the songs on disc two were the first to set Cave’s thoughts down onto paper and the rest followed, raised by their influence.

The sound of Ghosteen continues on from Skeleton Tree but is even more sparse and delicate. Warren Ellis’ use of electronics gives the album an ambient, otherworldly feel and drums are mostly noticeable only by their absence.

Lyrically, Cave is again on a peak and Ghosteen lays itself open to examination and interpretation. Loss and hopeful return are there in the lyrics, with Cave singing: ‘Oh the train is coming, and I’m standing here to see and it’s bringing my baby right back to me’ and ‘I’m waiting for you to return’.

Elsewhere he tells us that ‘it isn’t any fun to be standing here alone with nowhere to be, with a man mad with grief and on each side a thief, everybody hanging from a tree’ and of ‘a spiral of children climb up to the sun, waving goodbye to you and goodbye to me’

The album is rich with imagery, with several references to burning horses, Jesus and children.

He reverts to type as well, as Elvis and Jesus figure again in his lyrics. First song Spinning concerns itself with ‘the king of rock n roll, with black jelly hair’.

Where most singers seem to find their voice increasingly limited as they grow older, Cave seems to be finding fresh reserves for his, as if he needs to expand his range to get across the complexities of the lyrics that flow from him these days.

Second track Bright Horses starts off with a piano riff that would sound at home on Skeleton Tree.

Cave has the veil pulled from his eyes and no matter how poetically he may see the world, the reality of it will always assert itself as he sings: ‘Horses are just horses and their manes aren’t full of fire, the fields are just fields, and there ain’t no Lord.’

The Ghosteen of the title reveals itself as he realises ‘the little white shape dancing at the end of the hall
is just a wish that time can’t dissolve at all’.

Cave’s love for his wife Susie is another thread that runs through his work. On Night Raid he explains his muse by saying ‘Sitting on the edge of the bed clicking your shoes, I slid my little songs out from under you’ as Ellis conjures another David Lynch like soundtrack.

Galleon Ship continues this, with Cave singing over a piano soaked in reverb and ghostly backing vocals from Warren Ellis. Leviathan takes this to a level where Cave can barely express his feelings of love for his wife, resorting to an almost childlike ‘I love my baby and my baby loves me’ refrain repeated over and over.

The time Cave and Ellis have spent providing soundtracks for various films has fed into The Bad Seeds music, lending it an easy cinematic feel that suits Cave’s confessional lyrics perfectly.

Sun Forest seems to fit the cover of this album, an incongruous painting of a forest scene that shows lambs and lions co-existing alongside flamingos and yet more horses, as Cave accepts that the world he knew is gone, never to return; ‘the past pulls away and the future begins. I say goodbye to all that as the future rolls in like a wave, like a wave and the past with its savage undertow lets go.’

The title track opens disc two, its 12 minutes allowing The Bad Seeds to create an epic that occasionally touches on prog rock but that never gets away from Cave or becomes too much.

Fireflies again brings up ‘Jesus lying in his mother’s arms’ and again has an air of sad acceptance in its spoken, repeated refrain of ‘we are here and you are where you are’.

Final track Hollywood takes in huge lyrical themes in its 14 minutes, again taking in fire, ghosts and children climbing into the sun and, as such, is the track that most sums up Ghosteen.

It includes a Buddhist tale, where a mother is told to collect a mustard seed from a house to save her ill child, but the mustard seed must come from a house where nobody has died. The mother is unable to find such a seed, because in ‘every house someone had died’.

The message is clear – grief and loss are universal and no house can escape it.

The album finishes with the lines ‘Kisa sat down in the old village square, she hugged her baby and cried and cried. She said everybody is always losing somebody, then walked into the forest and buried her child.’

This, if anything, is the core of Ghosteen; it sees Cave finding comfort of sorts in the knowledge that suffering is universal and he is but a part of a greater whole.

He knows that whatever solace is available can be found in the sharing of grief that the Red Hand Files and his recent tour have made possible.

The kind of trauma that he and Susie have been through will never fade away, but Nick Cave has found a place in this new world to inhabit, from where he can continue to express himself and create his art.

Ghosteen comes to an end as Cave sings ‘I’m just waiting now for peace to come’. Maybe Ghosteen will help that process.

In the meantime, it is hard to imagine another album that has this much thought, this much emotional punch and this much meaning.

Nick Cave has again reached into the depths of his soul and returned with a masterpiece.

Share. Twitter Facebook Google+ Pinterest LinkedIn Tumblr Email
Previous ArticleLiverpool City Council buys Kings Dock for the princely sum of £1
Next Article Queen Zee split up – “it has been the greatest personal journey in our lives so far”