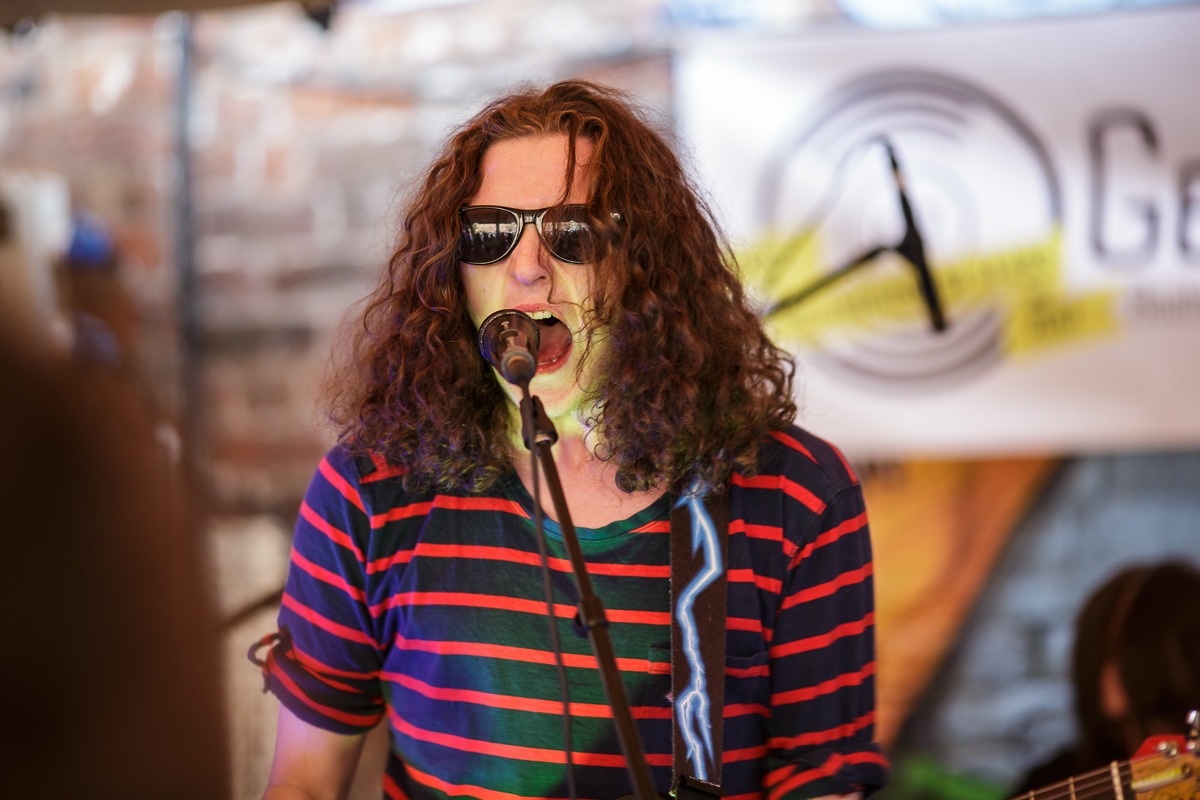 The Floormen headlined an impressive Blurred Bagel night at Outpost, Getintothis’ Connor Ryan was mighty impressed with the line up.

Formerly Maguires Pizza Bar, a glorious cave of cheese and marinara elation, Outpost is as ever tight, crammed and bursting with alt scouse energy via Samurai Kip and The Floormen.

The Floormen are energetic and glowing with a certain scouseness only the city’s faithful would understand. A sound very much seeping in experience and flavour from the streets of town, their grey landscapes speckled with purples and oranges, the meld of garage and psych is a recipe well worth stealing from ya nan.

A new lineup it seems, with an excellent guitarist front and centre who looks like the coolest dude to ever breathe, they bob up and down like a pastoral seesaw as Buddy gives it the bifters with his unique vocal delivery.

Before we continue to go on about how brilliant The Floormen are though, Samurai Kip are our next lucky victim.

Even luckier victims however are Hammerhead Snails and Shallow Water, also on the bill. Admittedly we didn’t see much but we certainly heard an absolute racket coming from the back, and we’ll definitely be checking em out soon to give them a proper seeing too.

On Saturday night’s performance however, it sounds like they’ll be the aggressors chewing me up and spitting me out, rather than this unprofessional loon giving them a shakedown. Go give em a listen if you haven’t already. We recommend Leech (SW) in particular, face melting shit laa.

Made up of again, cucumber incarnates, Samurai Kip are tight and really engage a small yet knowledgeable audience. Boasting a sound dripping in Mersey splendour, their songs seemingly all about the moon and its ever nightly presence really set the tone.

The addition of a trombone gave the performance an extra ingredient of finesse, which the group already rightfully own. The frontman certainly has a presence, placid and stoic yet riveting all the same. Channeling our inner Louis Walsh, he looks like a pop star, and sounds like a pop star. Replace the words “pop” and “star” with “future”, “local” and “hero” and you’re onto a winner.

The rhythm section are also in fine voice, the superb Lindberg family genes truly on display; we wish our lineage heralded as much musical consistency.

It was short yet sweet, but so were all the acts. That’s what’s so impressive we think about the lineup, they pack a punch. No longwinded Tekken esque combos barely scratching the health bar, just a left right goodnight of great music and charming personality.

The place really moves into the stratosphere when The Floormen enter the ring though – if you can call a dingy room of about 30 people a scene worth a renaissance painting (epic and moving) – they are sincere and bold.

We really do enjoy the playing of Buddy in particular, a man oozing with confidence and rightly so, his chops on the strings are some of the best that Liverpool has to offer. Luke Barlow is equally sensational, with little jazzy elements thrown in for good measure. He was truly taking the proverbial Micky.

They’d probably read this review and cringe at the hyperbole, but we can assure you our conveluted discourse is the embodiment of immense excitement we have for this group. They’ve got a great sound and a fantastic arsenal of upbeat, toe tapping songs which will probably evolve into something much greater given time.

We say “toe tapping”, it was a miniature skirmish up top as a balanced mix of lads and lasses twisted and shook like stock footage of some LSD fuelled protest about nothing in particular at all. Rebels without a cause, yet delighted to be doing something all the same.

Tossed in the Fire, if that’s what it’s even called (forgive our insolence), caught our second pair of eyes the most. Once again, Buddy is in fine form giving a real rousing vocal performance. Not pitch perfect but not meant to be either.

And even though we haven’t a fucking clue what he’s talking about, it doesn’t matter, the sound is distinct enough to rev up the intrigue engines.

Overall then, this Blurred Bagel Presents night was excellent and we certainly hope to see it as an ongoing excursion into the alternative side of Liverpool’s music.

If you haven’t already check out The Floormen’s latest triumph The Easy Peelers “Don’t Panic We’re In Cannich” as well as Samurai Kip, Hammerhead Snails and Shallow Waters.

Scenes of glorious emotion should ensue.