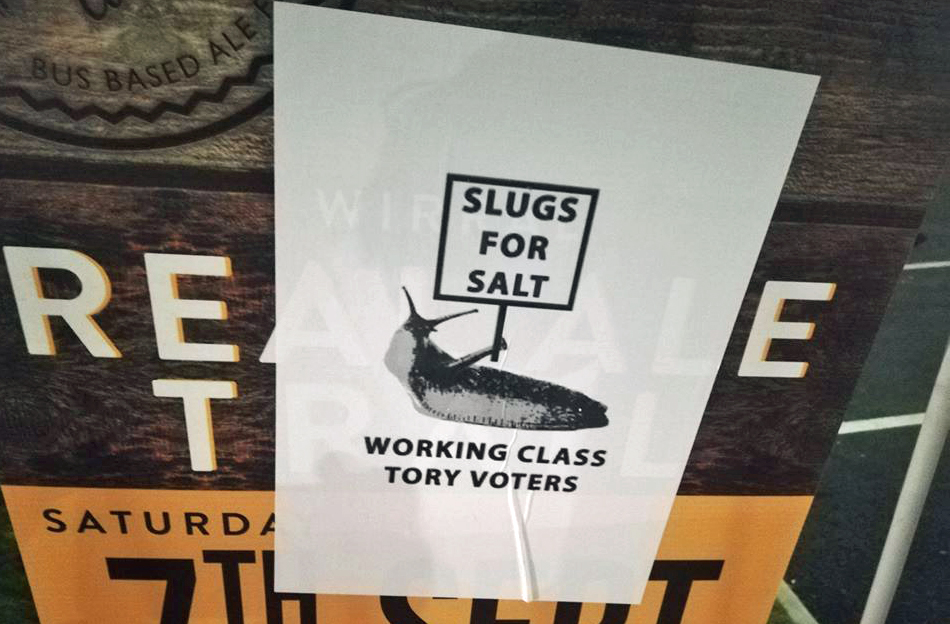 In the aftermath of the 2019 general election results, Getintothis’ Cath Holland despairs over the left’s attitude to working-class voters.

In the summer of 2016 after the Brexit vote, the conversation around blame for the UK’s decision to leave took on an unpleasant, jibe-ridden turn.

Media and public jabbed so hard at the working-classes with pointed fingers it quickly became cold hard fact – they alone were the ones responsible.

An entire social class, no matter the geography or occupation, put on the naughty step.

Because all working-class people share the same grey matter and homogenized carbon copy view on absolutely everything, don’t they? Not like the more educated and superior higher up the social ranks types, owners of intellectual capacity to think freely and with true clarity.

If you say something often enough it becomes the truth, as we saw last week with the infernal “get Brexit done”.

In response, north west publisher Dead Ink announced plans to publish Know Your Place, a collection of personal essays by writers from working-class backgrounds, to counteract the myth that all working-class are in ownership of one set of identical attitudes and moral codes.

The book came out in the autumn of 2017 and proved Dead Ink’s case.

My own chapter in the book, about working-class women and work and how feminism should intersect with class, lay alongside personal essays on food, sexuality, even a love of the seaside.  Know Your Place became a trendy book  – one independent record label in London has it on display on a shelf, like an ornament – but more constructively helped kick start a wider conversation around class and diversity.

The chattering classes stepped up, new opportunities in publishing and the creative industries for those from under-represented groups opening up, and with a real sense of support, enthusiasm and warmth. Wheels were turning in the right direction, and continue to.

Fast forward two years and even before the General Election 2019 campaign got out of the starting blocks and polling cards plopped on doormats, the aggro and antagonism towards working-class voters and presumptions of their thought processes roared again.

As if it had never been away. Only it was far worse this time.

It was vitriolic. Posters were put up, a picture of a working class Conservative-voting slug holding a “slugs for salt”  sign  underneath.

The slug posters outside supermarkets, on lamp posts and pasted on walls however paled into nowt compared to the ferocity online.

The paternalistic at best, abusive and intimidating at worst barracking and unwarranted hectoring of working-class people en masse grew on social media to hysterical, teeth baring levels. The working-class was given no face, or identity by the furious.

It’s a curious sort of political activism to call working-class people slugs or worse, in a plight get them on one’s side. No one can honestly believe it’s an effective method of courting the electorate, surely?

Maybe the theory was we’ll get the working-class to rise up, motivated by stick not by carrot. That’s the winning formula!

It got so bad I started to wonder if it was a bonkers, subversive strategy by Putin and Trump conjured up to make people so angry they’d vote Tory instead.

Virtue signaling is all very well, with an extra scoop of piety to add extra flavor, but it does not work. Not inside the night before Christmas echo chamber and not out in our streets.  The results of the election prove that.

When the exit poll then full results came in, the blind fury escalated.

There is a price to pay for working-class people voting against their interests. This might be harsh but long-term it is a preferred option than attempting to appease their parochial interests. There a chance they might see the light when NHS is completely gone… #StopBoris pic.twitter.com/2Bnz1QdRS2

Search your own Facebook or Twitter for the term working-class, over the last month.  See what it throws up. It’s awful.

The sense that working-class people are ungrateful underpins all of this. They owe their betters. They have a debt to pay. Say thank you to us, because we’re acknowledging you exist. You need us. They’re the ones that need fixing, not us or our approach. Be humble. Indeed, know your place.

What a bizarre moral argument.

To turn it on its head, there were no posters pasted outside Waitrose or in the comfortable green suburbs when David Cameron and the Liberal Democrat coalition crowbarred themselves to victory in 2010 brandishing austerity like a weapon.

Chaos with Ed Miliband was the least worst option five years later, and a way of avoiding the Brexit vote in the first place. But insufficient numbers held their nose then.

And look where we are now.

The Labour Party’s relationship with its traditional working-class supporters, in areas romantically referred to as heartlands since 10pm last Thursday, has been a rocky one over the past years. Emily Thornberry’s  sneery tweet about the St George’s flag hung from a house in Rochester in the 2015 General Election campaign was an absolute doozie.

It goes deeper than that and wider, more recent and widespread.

Take Labour councillors and MPs threatened by deselection or trigger ballots due to insufficient ideological purity, or who simply threw in the towel after being labeled Tories that many times.

What of the people, the long standing Labour voters, the working-class voters who have voted for them? The ones who asked them for help perhaps?

Not the ones enquiring about school boundaries or overhanging tree branches, but nitty gritty nightmares borne of poverty instead.

Foodbank vouchers, having no money for the gas meter, constituents finding themselves homeless.

If the MPs and councilors who helped them are Tory scum, are they the same for supporting them at the ballot box or taking help from them all these years?

Telling people to “fuck off and join the Tories” might bring a cheer from the comrades, a warm glow to the heart and earn a triumphant punch in the air but can anyone be surprised when people actually go and do exactly that.

You catch more flies with honey than vinegar. Who turns up to a date brandishing a knuckle duster? No one gets laid that way. And colouring books, a catchy theme song and rallies don’t loosen knicker elastic either, as it turns out.

I can hear the crunch as heels are digging in on all sides.

When Boris Johnson hiked up to a newly won Sedgefield, Tony Blair’s former constituency on Sunday, and vowed to reward the traditional Labour voters who lent the Conservatives their votes this time, I felt a chill.

He was marking his territory, like a dog pissing against a lamppost.

Johnson’s moral centre is flawed at best. His lies are notorious. Him looking kindly at those voters is, one suspects, absolute bollocks.

But his disgust of the working-class was kept on the down low these last weeks.

It was flagged up by his black and white photograph Bullingdon Club past and random obscure quotes from no one’s quite sure when, but intuition told his supporters not to tell voters to fuck off.

Lack of respect for those on low incomes, working-class or not, is prevalent in both the left and right and everyone inbetween. I realise that now I’ve seen such obvious hatred of millions of people who have more power than any of us assumed.

The ones who, as it turns out, aren’t powerless or childlike and not dependent on the upper classes to guide them.

And not in need of education on the right way to do things and think.

They don’t know their place at all.