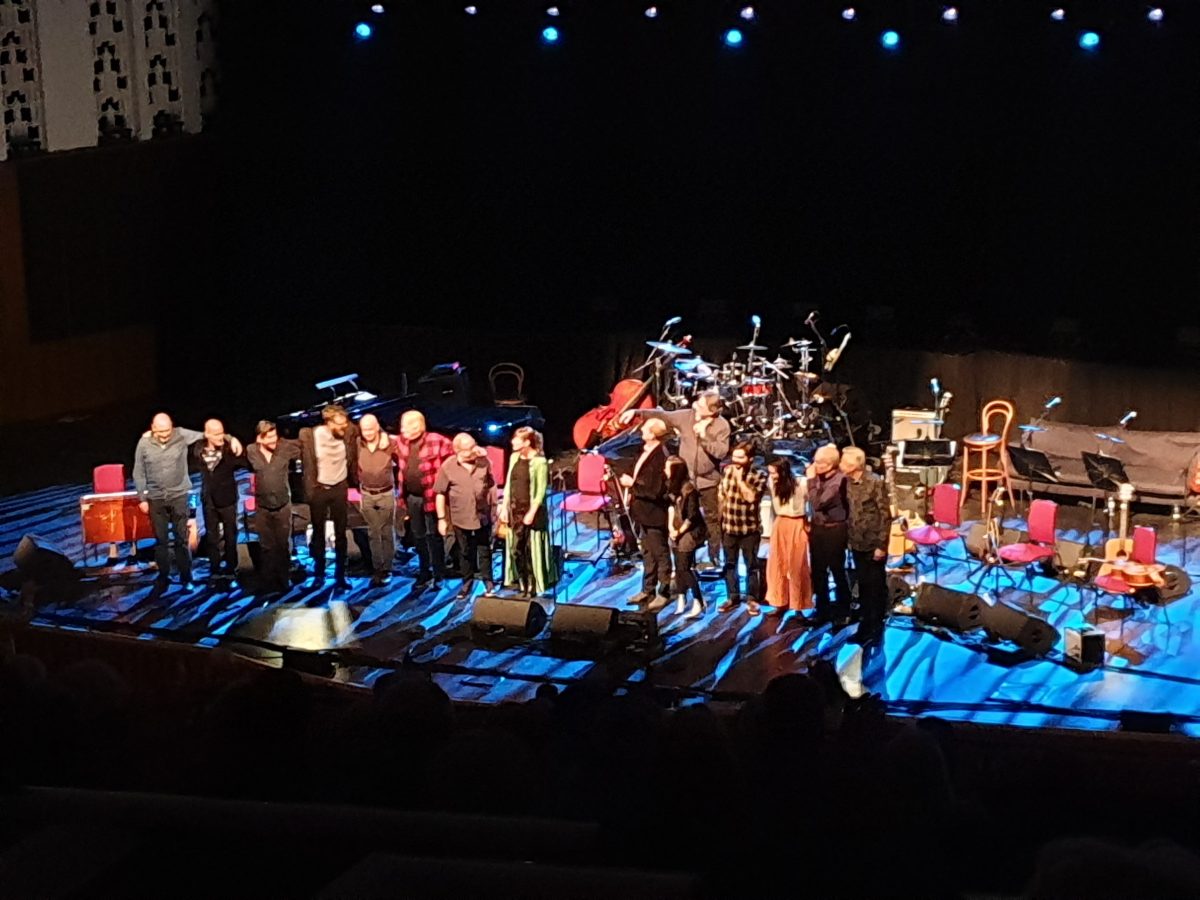 The Transatlantic Sessions came to Liverpool’s Philharmonic, Getintothis’ Naomi Campbell was warmed up by the evening chill.

For almost two decades Jerry Douglas the master of Dobro, has joined Scottish fiddle virtuoso Aly Bain across the sea to co-direct the Transatlantic Sessions.

Guest musicians hailing from Ireland, Scotland and America take to the stage each year whilst the all-star, in-house backing band remains the same.

In its 17th year the sessions visited Liverpool’s Philharmonic Hall, bringing some much needed warmth to the city on a notably cold February night.

The scene is set similar to a hearty living room, each musician sat side by side, surrounded by assortment of instruments from Uelliann pipes to a vintage looking Reed Organ with Douglas and Bain comfortably seated in the middle.

With the addition of a sofa and floor lamp the stage is reminiscent of an idealized friendly local, throw in some humorous chit chat from our hosts and all that’s missing is a fireplace.

The running order played out in a delicately executed rotation of guest performances, anticipation and excitement growing as we gradually became familiar with the 15 figures on stage as though they were part of the family.

After a mesmerising intro and our first glimpse of the bands’ effortless ability to pass solos back and forth, US singer and multi-instrumentalist Cahalen Morrison was introduced to the front of the stage by Douglas. 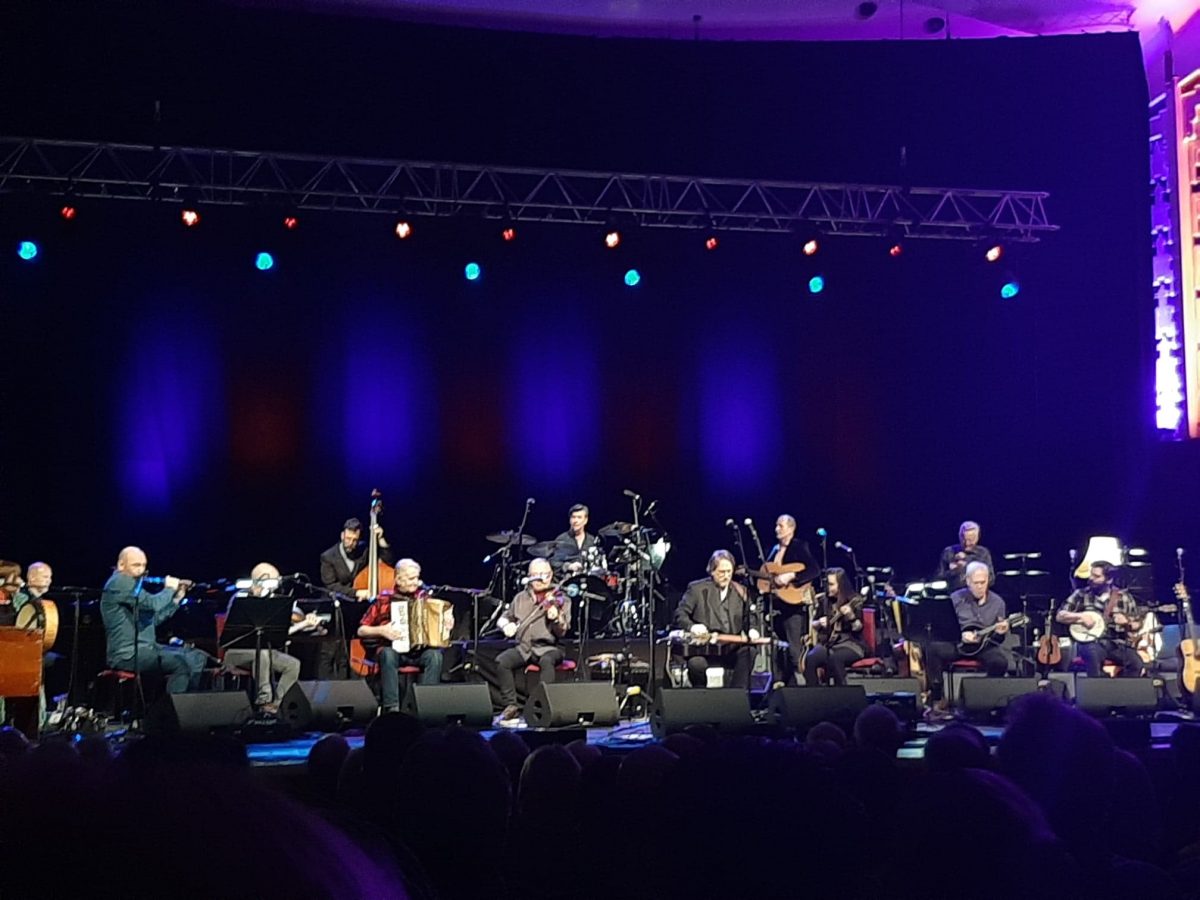 Dervish front woman Cathy Jordan firmly planted the Irish roots of the show delivering “good craic” in a strong Southern accent and amusing us with anecdotes from life on the road.

After asking us to help out in the choruses of American waltz Sweet Roseanne we were all too obliging before her dreamy, magnetic voice accompanied by a backdrop of sweet sounding harmonies silenced us.

Introducing one of his youngest guests to date, Douglas proudly presented American mandolinist and fellow Grand Opry star Sierra Hull whom he excitedly reports, “can play the dog out of the mandolin“.

It’s a given you’ve made it pretty far in the world of American Folk when Jerry Douglas peers up from his lap-steel euphoria to watch you play, but the Tennessee native is in a league of her own with luscious songs How Long and Lullaby.

Scottish singer-songwriter Rachel Sermanni appeared right at home on stage with her acoustic and mandolin despite nervously admitting to experiencing an “existential crisis” earlier, finding herself in this “strange” scenario with such world renowned players behind her.

Nonetheless the Inverness singer mesmerised with her ethereal voice, performing originals from an extensive repertoire, including a number from her most recent folk-noir album So it Turns.

Trading the Atlantic for the Pacific, Australia born guitar legend Tommy Emmanuel sailed his way across the stage like a breath of fresh air in a haven of folk-rock.

Loving the ‘Transatlantic Sessions’ gig at the Liverpool Phil with an incredibly talented big band of brilliant folk musicians and various ‘guest’ performers including Cathy Jordan of Dervish – what a voice!! pic.twitter.com/t11L02RH9a

The Nashville favourite surpassed all expectations of his celebrated fingerpicking skills in an epic 10-minute acoustic instrumental of Beatles classics, before inviting the rest of the band back for his original Halfway Home.

However it was Transatlantic resident, Scotsman Phil Cunningham that had us in the palm of his hands with lamenting tune Darling Clemmie, the mournful sounds of his accordion dancing alongside the tin whistle and pipes like lost lovers.

Bain invited the three female guests of the night forward for the encore with Old Churchyard, an emotive ballad backed only by the accordion that Bain rightfully pre warned would leave not a dry eye in the house.

Combined in their Celtic heritage together the voices of the trio resulted in a pure, angelic sound raising the hairs on the back of our necks before one final jig saw all performers back to the stage and we were swiftly on our way back out into the cold.