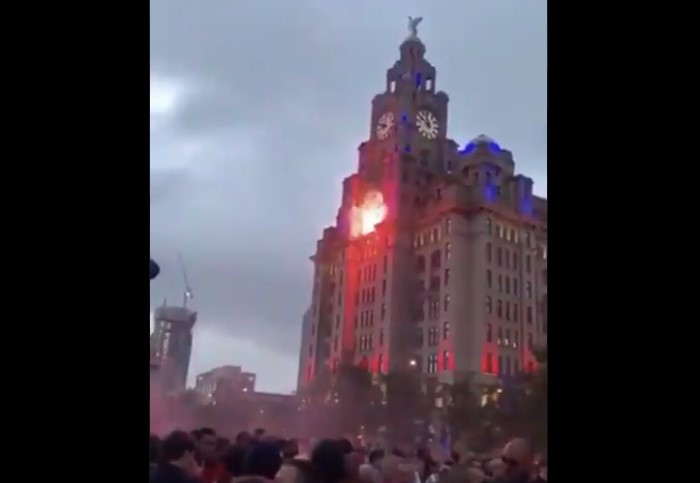 The Liver Building on fire

Liverpool’s iconic Liver Building was set on fire last night when a flare struck, Getintothis’ on the current state of play.

Liverpool’s Liver Building was set on fire after by a firework being launched at the historic landmark.

A fire broke out on the Liver Building balcony as huge crowds gathered on the Pier Head.

Merseyside Police, Liverpool City Council and Mayor Joe Anderson have urged people to leave the city centre and head home after thousands of people flocked to the Pier Head despite the COVID-19 pandemic.

Around 11pm, a fire broke out on the Liver Building balcony before fire crews arrived at the scene and quickly got the blaze under control.

Here’s one of those unfortunate strays at the liver building pic.twitter.com/8AfmBdNjU1

A spokesperson for Merseyside Fire and Rescue said: “We were alerted to a small fire on a patch of astroturf.

“Firefighters have dealt with the incident and the fire is now out.”

Crowds are still being asked to leave the area as Mayor Joe Anderson considers a city “curfew” to stop people gathering in town.

Liverpool fans trying to say it was a ‘stray firework’ that set fire to the Liver Building oh yeah cos that’s not aimed at the building at all pic.twitter.com/P6IH0d6Rgu

Mayor Anderson said: “People are drinking and causing problems and we just want to make sure that everyone stays safe.

“Large gatherings like these are still not something the city needs as coronavirus continues to be a real risk for us here.”