Peter Guy is currently somewhere in Lost Vagueness, possibly getting married to a tree. He has, however, left his memories of Glastonbury 2005 to help us get into the spirit. Or something. 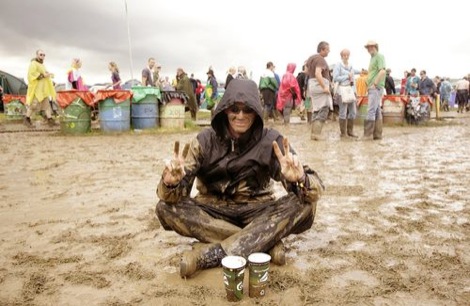 Friday June 24
We awake at around 5 AM to the sound of steady, fast, hard rain before incessant thunder and lightning drum rolls for what seems like hours.
MarvelousÃ¢ÂÂseven consecutive days of sunshine, and now this. ItÃ¢ÂÂs not until 10 AM, venturing outside the dry haven of our tent for the first time, that the realization of the devastation caused by the storm kicks inÃ¢ÂÂWorthy Farm has effectively been transformed into a muddy lagoon. Its only later we discover two months worth of rain fell inside four hours.

The scene is quite extraordinary: there are hoards of inhabitants struggling around with readymade tents aboard their backs staggering to find new, drier ground, a beer tent has been ripped in half by the lightning and all the stages are running late due to power cuts.
By mid-afternoon 2000 people will have left and rumours abound that the festival is off.
Thankfully itÃ¢ÂÂs not. There’s only one thing to doÃ¢ÂÂlap it up! Rather aptly, on this the year dedicated to the late, great John Peel, The Undertones are the first band to power on to the Pyramid Stage, and it’s just what’s needed. Raw, fast energy to wipe away the puddles and hovering grey skies. Sadly the same can’t be said for The Black Velvets whose stodgy lard-like huffing quickens my pace towards the New Bands tent, (re-named John Peel Stage) for one of 2005’s bright young thingsÃ¢ÂÂNine Black Alps.
Having negotiated the swamp encircling the tent, the much-laud Mancunians live up to their ‘new-Nirvana’ tag with a propensity for insanely catchy choruses (‘Cosmopolitan’) and bite-size riffs (‘Get Your Guns’) while cleverly avoiding clichÃÂ© and derivativeness. A hot-dog devoured (the first of many on a weekend strangely devoid of quality food) we spot Howard ‘Mr. Nice’
Marks enjoying some fast-food cuisine of his own, before heading back to the Peel stage to nod our head with indifference to Maximo Park (why are secondary school blazers a prerequisite for a record deal in 2005?).
Yourcodenameis:milo beguile and amaze for 20 minutes before theirgeometric layers of pandemonium wear thin and for the first time we begin to feel the effects of sodden wet feet. M83’s swooning electronica manages to ably distract but it’s too early in the day for cataclysmic swathes of cinematic genius so we head back in search of dry land.
Arriving back at base we are pleasantly surprised to catch Elvis Costello’s final bursts, which include a buoyant Ã¢ÂÂOliver’s ArmyÃ¢Â? and a surprisingly brilliant cover of the King’s Ã¢ÂÂSuspicious Minds.Ã¢Â? Upon arrival at camp, we find the mood is distinctly mixed. Expressions tell tales of agony, ecstasy, frustration, and bewilderment. Chris champions the energy and hairdos of Hot Hot Heat. Dave wears the expression of a bull mastiff chewing a nettle while bemoaning the state of his footwear. Dan, on the other hand, is plainly still feeling the effects of Thursday night’s excess.
Ã¢ÂÂI’ve lost me jumper, me shoes, me hat and fackin car keys.Ã¢Â?
Ã¢ÂÂI thought it was a hire car?Ã¢Â?
Ã¢ÂÂIt fackin isÃ¢Â?
Ã¢ÂÂWhat you gonna do – howyou gonna get it home?Ã¢Â?
Ã¢ÂÂI don’t fackin’ knowÃ¢ÂÅ  Push it!Ã¢Â?
After an hour of S&M mud-related torture, (picking caked soil off my legs, which in turn plucks every hair from their follicles), I leave camp in search of 2005’s most-hyped band: Bloc Party. Kele and co are never going to rule the airwaves, their brand of post-punk pop-art veers too closely to the dissonance of Gang of Four and PIL to allow them Ã¢ÂÂdo a FranzÃ¢Â?Ã¢ÂÂbut in Silent Alarm they can certainly lay claim to being one of the few N** R**k R********n bands that have every right to be noticed; an LP that unleashes more hidden treasures with each listen and in Matt Tong have one of the finest drummers weÃ¢ÂÂve ever witnessed. Ã¢ÂÂLike Eating Glass,Ã¢Â? Ã¢ÂÂBanquet,Ã¢Â? and Ã¢ÂÂPositive TensionÃ¢Â? are delivered with breakneck speed and precision while Ã¢ÂÂThis Modern LoveÃ¢Â? is a heart-breaking wreckage of pure pop. They’re also the first band of the weekend that make our feet shuffle uncontrollably. If there’s any criticism to be had, it’s directed at Kele’s voice that occasionally lacks the power to drive the songs home.
We stupidly leave early in the vain hope of catching the last half of Secret Machines’ set but arrive only in time to hear closing track Ã¢ÂÂRoad Leads Where Its LeadÃ¢Â?Ã¢ÂÂa monstrous swirling space epic. Damned mud. ItÃ¢ÂÂs 8.30pm and itÃ¢ÂÂs MIA time. The anticipation for the too-cool for school Sri-Lankan-come-Londoner is apparent as the heat in the Peel Stage creeps past boiling.
Attempting to break down the music from Miss Maya Arulpragasam’s debut Arular is a hopeless task, but similar to DFA 1979 and James Murphy, itÃ¢ÂÂs utterly now. The belligerent Ã¢ÂÂPull Up The PeopleÃ¢Â? dischargers like a grenade while Ã¢ÂÂBucky Done GoneÃ¢Â? is Dizzee Rascal’s bastard offspring delivered by Asian Dub Foundation on speed. The pace is relentless while the backdrop and lyrical imagery is of war, terrorism, and oppression, but the atmosphere in the tent is one of unity, togetherness, and good times. It’s a rare thing to find a musician that delivers a tune with a riot-police-like approach and a groove fit for the dance hall, but such is the contagious nature of tunes like Ã¢ÂÂFire FireÃ¢Â? and the samba-like Ã¢ÂÂSun ShowersÃ¢Â? it’s impossible to resist.
And while encores are usually reserved for the Pyramid headliners such is the roar of approval M.I.A. throws up a triumphant Ã¢ÂÂGalangÃ¢Â? finale that sees the entire tent AYE-AYE-AAAAA-WOO-E-OW-E-OWW-OOO-AYE-AYE-YAY-ing in mass approval. More than satisfied with the evening’s entertainment we hook up with Gareth for a wander through the masses atop the viewing platform for Las Vegas dandies The Killers. Passing a fresh-as-daisy Abi Harding, who no doubt had been winched in by crane from her Zutons catacombs judging by her spotless summer attire, we reposition ourselves centre stage. Having taken an initial liking to Hot Fuss, itÃ¢ÂÂs fair to say our interest has waned from indifference to mild distain and irritation for the NME poster boys, but tonight there’s no doubting The Killers are made for this stage. Big tunes, big presence, and big egos. 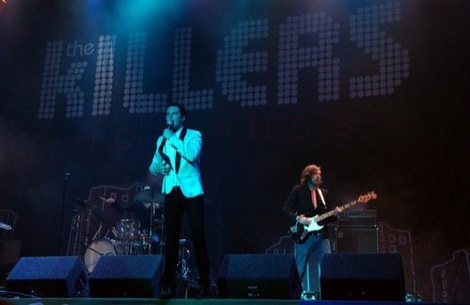 Brandon Flowers may be a by-word for pompous twat but there’s few able to whip up a crowd with the flicker of an eye or quiver of a lip. He may be as wooden and rigid as my grandma’s sideboard but, in his mint-green suit, he’s positively electric.
The tunes aren’t half bad tooÃ¢ÂÂeach and every one an adopted national anthem, ten times more grandiose than on record and for an hour or more the band that wisely turned down Sunday’s Kylie-free headline slot rule Avalonia.
Retreating back up to the viewing platform we snug in with Luke and Suzie Sausage for tonight’s main courseÃ¢ÂÂa red/white, boy/girl affair commonly known as The White Stripes. And they rock. Loudly and defiantly. For this is no passing fans routine. Luke decides to give them a chanceÃ¢ÂÂÃ¢ÂÂI know Ã¢ÂÂSeven Nation Army,Ã¢ÂÂ that’s about itÃ¢Â?Ã¢ÂÂand come 11.30 PM he’s out of his mind with restless perplexity at the Detroit duo’s alluring charm.
He had a point. For to the uninitiated, Friday’s set was, for want of a better phrase, all over the shop. There was something old (Ã¢ÂÂBroken BricksÃ¢Â?/Ã¢ÂÂCanonÃ¢Â?), something new (Ã¢ÂÂThe NurseÃ¢Â?), something borrowed (Ã¢ÂÂJoleneÃ¢Â?), and something blue (Ã¢ÂÂBlue OrchidÃ¢Â?). Hits set, this was not. Playing in front of a visually stunning mount doom volcano backdrop, Jack and Meg, as always did it their way. The deafening fuzz of Ã¢ÂÂBall and BiscuitÃ¢Â? was offset with the quirky Ã¢ÂÂMy DoorbellÃ¢Â? while the sinister Ã¢ÂÂI Think I Smell A RatÃ¢Â? saw Jack wig out like a Lucifer-inspired Hank Marvin for what seemed an age leaving Meg to bash away inanely and cock her head in her own inimitable manner. I loved it. Luke clearly did not.
There were of course singlesÃ¢ÂÂÃ¢ÂÂHotel YorbaÃ¢Â?’s skiffle pop tossed aside early on while Ã¢ÂÂDead Leaves & The Dirty GroundÃ¢Â? cranked up the noise from the off. But for the most part it was xylophones, solos, hoedowns, and marimba madness. Even the one time Jack addressed the crowd he did so using a vocoder apologising for the weather and the band’s nationality.
The only predictable moment arrived as they prepared to disappearÃ¢ÂÂa devilish Ã¢ÂÂSeven Nation ArmyÃ¢Â? thudding out for the encore at least awoke Luke as we prepared for a night on the ale.
And drink we did. Wine bars, doughnuts, Lucifer-impersonating stunt shows, acrobats and much laughter concluded an eventful day. Boy, my feet were killing.