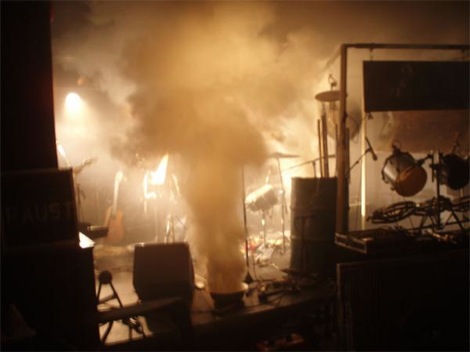 The morning after the night before, I had a ‘Bobby Ewing moment’. Stepping out of the shower, with my ears still pulsating and my head cluttered with fog, the question, ‘did that all really happen? was at the forefront of my mind.
Few venues the world over, let alone Liverpool, could possibly have borne witness to such an impressive, fantastical happening. This wasn’t a night out. This wasn’t a concert. This wasn’t a stage production. This was an event. But did it all really happen?
When Worzel Gummidge enters stage left and starts barking through his sinewy beard in quasi-French: ‘You are not here! This is the future! We are not here! Inspirassshion!’ You begin to wonder what you’ve let yourself in for.
Dressed like a Kwik-Fit fitter, Gummidge, or Jean-HervÃÂ© PÃÂ©ron (JHP) as he’s known to his mother, is last on stage. For the past ten minutes the other touring members of Faust have been blasting through a mix of heavy cyclical krautrock for which the term ‘legendary’ was probably invented.
Formed in 1971 in WÃÅmme, Faust pioneered a new sound and with it a new way of recording and listening and despite their break-up in ’75, they’re still together. Here. Tonight. In Liverpool’s tiny Barfly theatre. And as if to emphasise the fact that this is a deal all of Dragons Den would bust a gut to bag, there’s droves of backpack wearing, camera-holding Europeans shuffling around the place eager to catch a snippet of this mythical, scrap-heap slaying German beast.
One thing you must understand though – this isn’t Faust – this is Faust Mk I. There’s another Faust – Faust Mk II – on tour elsewhere with other members from Faust. But this is generally considered the real Faust here tonight – see?
JHP joins fellow Faust (or ‘Fist’ if you’re one for translations) founder Werner “Zappi” Diermaier, on a stage which is a cross between a building site and music technology store room. Zappi’s Shrek-like frame is encased inside scaffold containing a large drum kit and an even larger sheet of metal which wafts precariously above his head. When Zappi thwacks this sheet the sound is akin to a lightning bolt entering your brain via your eyes. ZZZzzzzzzzz! 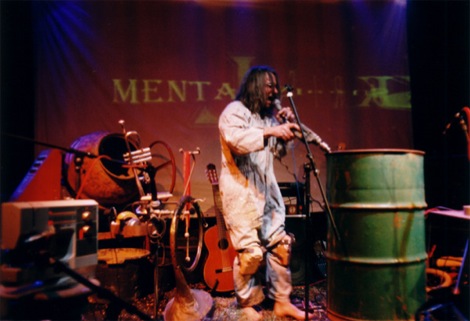 Joining these two are Colin Potter (Nurse With Wound), Geoff Leigh (Henry Cow), Geraldine Swayne (…Bender), Ann Matthews (Ectogram) and Andrew Liles all at alternating times contributing trumpets, flutes, keys and plenty of guitars.
After the introductory barrage, JHP acquires a cardigan from one onlooker in the crowd, then, casual as you like, brings on an ironing board and proceeds to embark on a bit of housework while Zappi drum rolls and Ann mutters incomprehensible words of advice.
All of which would sounds ridiculous, verging on performance pretension, were it not for the music which absorbs you and spits you out again several years later.
For that’s the beauty of Krautrock – it’s a marathon which swaps pain barriers for pleasure, designed not for those lacking in patience or spirit, but those in for the long haul. One plucked string can be followed in infinite repetition until the next layer is added. Then just as your waning, the a mezzanine level intersects, taking you up higher to another plane. This formulae continues in systematic, forward motion until you’re entirely in its grip; lost, swaying and in ecstasy.
With the ironing done and the cardigan pristine, acoustic guitars are bent to the sound of what looks like a Victorian lung trumpet before Zappi nonchalantly grabs an electric sander – you know the type, usually applied in dire Hollywood remakes when the Leather-faced one decides to reduce the hapless Kevin’s face to a mosh of gristle – and pummels the metal wall firing off shots of sparks.
Not content, following on from a reggae-tinged, Ege Bamyasi-inspired jam, JHP and Zappi bring on the big guns – power drills and chainsaws and commence hacking into a steel drums, cymbals and huge girders of steel.
All the while the music churns, the riffs grow in density, the front row is showered in sparks and health and safety officers recoil in horror.
The final act sees JHP, now covered in soot and sweat, every inch the maverick lunatic, is beaming insanely and decides to set fire to the steel drum’s contents before the band and crowd sing in unison the Faust So Far ‘hit’ Rainy Day for Sunshine Girl which recalls a sun-fried Flaming Lips.
It’s an incredible finale, to an even more incredible evening; my senses still don’t quite know what really happened.
*Main image courtesy of Glasswerk.co.uk & inset JHP’s world
** For some fantastic live visuals: Everything to do with Faust – The Faust Pages
FAUST