The audio equivalent of OD-ing on Love Hearts bags Album of the Week, while Getintothis is deeply let down by an old friend… 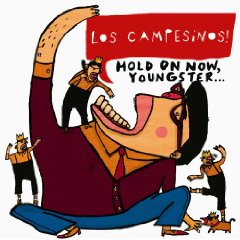 Los Campesinos!: Hold on Now, Youngster… – Album Of The Week
Wichita
Q) What’s worse than a show-off?
A) A show-off who has every reason to show off.
Meet Los Campesinos! The UK’s biggest scenester show-offs with bonus exclamation marks. They’ve eye-balled every classic novel ever written, digested Pitchfork in its entirety, own the complete works of Independent music and are namedropped by every holy-than-thou hipster on both sides of the Atlantic. And as if to prove their superior cool all seven of the Cardiff University graduates have adopted their band name as their surnames. Buggers!
Of course, where it not for their incredible debut they’d be set up for a complete ‘Twanging‘. But it really is some debut.
As far removed from anything going down in the UK, Hold on Now, Youngster… is a masterpiece in frenetic now-ism. This is MSN-rock.
Built on a foundation of light-speed instrumentation; chockablock full of giddy violins, angular, ramped up to the max guitars, in-your-face glockenspiels and a cacophony of bratty chanting on first listen it can be too much to swallow, particularly given the fact that of the 12 tracks only one – Knee Deep At ATP (see they even name-check the world’s hippest festival) – is anything less than whirlwind in delivery.
But being put off by a bunch of sprightly kids is for Eagles fans, and revisiting the likes of Death to Los Campesinos! is mission impossible – all dancing strings and infectious boy-girl vocal trading it’ll have you rolling down grass verges in no time.
It’s little surprise that they’ve mined the talents of Broken Social Scene producer David Newfeld as he is no doubt well-versed in wading through great hunks of collective noise and making perfect sense out of it. Check how You! Me! Dancing! emerges from a wall of gack transforming into a woo-woo indie disco classic with the most joyful chorus of 2008.
If there’s a chink in their armory its mainman Gareth Campesinos‘ sub-standard whimpering vocals, which make Graham Coxon appear Rhidian-like.
But, heck, enough with the downers – Hold on Now, Youngster… is an exercise in ecstatic pop gems and you just hope there’s another bunch of show-off kids sitting up taking notes.
For fans of: Picnics, Tiger Milk, helium
8/10

Dead Meadow: Old Growth
Matador
Introducing 2008’s biggest let down thus far.
After the staggeringly groovy Feathers big things were expected, but Old Growth should have been christened Stunted Growth.
It takes until track five, ‘Till Kingdom Come‘ – a thudding, characteristic wah-sludge, backed by undulating, spectral orchestration – for anything remotely approaching WOAH to kick in.
But too often DM’s fifth offering replays old tricks displaying little, if any progression at all.
There’s a cute tabla section in Seven Seers and that’s about it, the rest is rehashed (no pun intended) psyche grooves and ‘I’m too fucked to sing,’ from a pissy Jason Simon. Blows.
For fans of: Eye-patches.
5/10

Throw Me The Statue: Moonbeams
Secretly Canadian
The inlay of Moonbeams gives an insight into Scott Reitherman‘s problem. Holed up in his one-bed pokehole he’s buried beneath an assortment of gear with only his cat Derek to listen to his blurry-buzzing-like-a-fridge electro mopery.
Seriously, this guy makes Mark ‘E’ Everett appear delirious.
There are a few ups, Groundswell and About To Walk embrace clipperty-clop good vibes with the occasional brass-employed bluster, but for the most part the sound of detuned accordions blurting over lo-fi college synth-rock will have you reaching for the off switch. Nice cover, mind.
For fans of: Grandaddy, loners, dust.
4/10

Felicia Atkinson & Sylvain Chauveau: Roman Anglais
O Rosa Records
Ooo, enigmatic French chick whispering into your mind about Twin Peaks backed by shimmering, electro-minimalism. Say no mowaaaa!
Oh, alright then. Atkinson is a Parisian Jack-of-all-arts specialising in wabi-sabi (the aesthetic that beauty is imperfect, impermanent and incomplete – so it says on the press release), while Chauveau has toured with Sigur Ros, composing soundtracks and releasing shithot neo-classical Stars of the Lid-type swag on the likes of Fat Cat.
Roman Anglais plays like you’re falling from an airplane and all around you is blissed out radiant chiming but instead of plunging to your death you land on a giant bed of rose petals. Then you do it all over again.
For fans of: Kandinsky, Amiina.
7/10

The Cave Singers: Invitation Songs
Matador
It’s hard to imagine Jason Pierce moving to the country swapping his goldfish bowl head-gear for a deerstalker. But if he did, he may produce the kind of hypnotic mantras ala Seattle’s Cave Singers.
Refreshingly, they sound zip like their grunge forefathers, instead revelling in warm, cloaking folk drizzled in buzzing electronica and the merest whiff of kraut.
Opener Seeds of Night is vying for most played track of 2008; all cyclical hazy Byrds‘ bliss coupled with singer Pete Quirk‘s Dylan-meets-Howie Payne nasal squawk.
Elsewhere, Elephant Clouds meanders seemingly lost in a bath of brushed drumming and gurgling organs before Derek Fudesco‘s stabbing guitars bring both drama and violence to the table while Helen is pure Fleetwood Mac brilliance with the aforementioned J Spaceman at the production desk.
If Cave Singers have one special asset it’s producing miniature folkie suites and dressing them up into glistening, otherworldly treasures.
For fans of: Lindsey Buckingham, harmonicas, mountains.
7/10