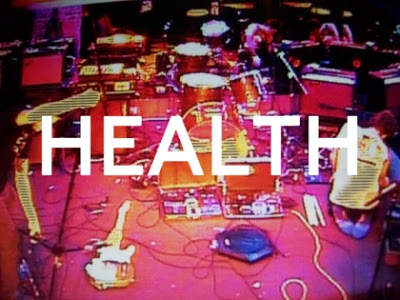 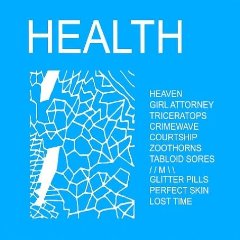 HEALTH: HEALTH – Album Of The Week
Lovepump Records
There’s a perpetuating debate among music lovers and writers about the validity of ‘post-rock’ as a movement and its current malaise.
Whether or not the term is dead, or indeed died years ago, is a discussion which appears set to run and run, but one factor all too apparent in the current wave of incredibly innovative and exhilarating bands infuriatingly linked with the now catch-all byword for largely instrumental music is that most clearly share next to no similarities with the first wave (Bark Psychosis, Slint, Tortoise etc) or even the second wave (Godspeed You! Black Emporer, Mogwai, Sigur Ros etc) of post-rockers.
Battles, Bear In Heaven and Panda Bear are obvious examples that are inexplicably linked to this growing scene which bears no name but is clearly identifiable owing to one criteria: great fucking music.
Welcome, then: HEALTH. An LA quartet who share Battles’ ear for the rhythmically insane, Panda Bear’s otherworldly drone and Bear In Heaven’s excursions into sheer, loud noise.
This love of noise clearly had an influence on their choice of location, as the record was conceived in their hometown’s venue The Smell which while dank and dark gave off a church hymnal with HEALTH at the helm.
Indeed, much of their self-titled record grabs the best bits of The Liars‘ Drums Not Dead and infuses it with a steely self-restraint which knows when to pull the plug just as the groove reaches boiling point.
At a mere 30 minutes, the wealth of stellar material is close to staggering, and despite initial listens giving little away there’s enough robotic, infectious melody to guarantee repeat plays.
Glitter Pills is an obvious example of their rabid gratification; what begins as metallic wall of compressed thudding transforms into Terminator-electro musik which by the two minute 38 second-point stops abruptly only to break out seconds later into an ear-popping screech of computer meltdown. It’s silly, catchy and highly entertaining.
Opener Heaven gives you almost 30 seconds of ‘easing in’ before all hell breaks loose with the type of noises a car would emit – were it human – as it heads for the crusher. Excruciating sheet-metal ripping, blinking sirens and stabbing guitars may sound nasty on paper but this is disco inferno for 2008.
The cacophony of tortuous screams and Lightning Bolt-like mania on Tabloid Sores gives way to an almost pop accessibility on centre-piece / / M which is split between tribal pounding and a trance mid-section.
The psychosis extends to final track Lost Time which sees Jacob Duzsik lead the marching cries amid more dense beats before once again we’re brought to a swift halt and a few closing seconds of silence.
Where once ‘post-rock’ depended upon the quieter moments the new breed of innovators are excelling in creating a loud noise sound ever more refined.
For fans of: Dead disco, The Boredoms, Scrap Heap Challenge.
8.5/10 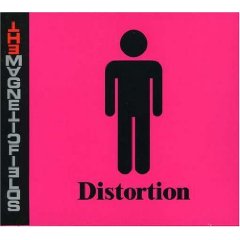 Magnetic Fields: Distortion
Nonesuch
Stephin Merritt doesn’t just release records, he designs concepts. From 2004s i, where every track was shaped around that very letter, to 1999s masterpiece 69 Love Songs, a three-disc whopper concerning matters of the heart, Merritt records when the big idea grabs him.
Distortion is his 39-minute ode to fuzz and like all Magnetic Fields affairs there’s a battle between the music, tone and lyrics with often the most pop, quirky dazzler reeking of sadness or bleak darkness.
See Merritt’s Beach Boys update of California Girls where he spits lyrical bile about tanned 17-year-olds with coke habits and how he’d like nowt better than to chop ’em up with his axe, concluding ‘They will hear me say, as the pavement whirls, I hate California girls.’
This black humour extends throughout Distortion and while it zips along at a heady pace, this devil-may-care attitude adds to the disposability of a record which tosses up all the right influences – Jesus & Mary Chain, The Cure and Cocteau Twins – while rarely possessing their lasting substance.
For fans of: Distortion, duh!
6/10 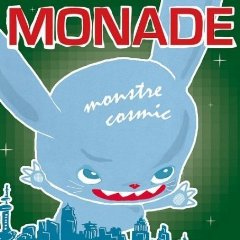 Monade: Monstre Cosmic
Too Pure/Beggars Banquet
A regret: while working for my student Uni paper I gave away many records, but the one that always does my head in is Stereolab‘s Cobra and Phases…. Now this record may not be held up as their finest hour, but without giving it a moment’s listen I deprived myself of LÃÅ titia Sadier‘s exotic world.
Years later, I learned the error of my ways, and so it was with great joy when on an unremarkable January morning, her latest offering Monstre Cosmic by side-project Monade crash-landed on the doormat.
The title offers more than a few clues to the delights on offer; all whirling cyberscapes, buzzing theremins, choppy kraut-pop rhythms and cosmic orchestration with Sadier’s vocals switching from English to her native French adding a sensuous gloss to proceedings.
There’s a superb structure to Monstre Cosmic with tracks cleverly hooking you into some kind of intergalactic lull before catapulting you into the cosmos.
Sure there’s a tendency for too much smaltzy Bacharach-ing, but for the most part Monstre Cosmic is exactly that – a monstrously cosmic trip into the sublime.
For fans of: Moogs, Serge Gainsbourg, neck scarves.
6.5/10 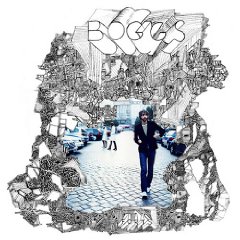 Boggs: Forts
Tangled Up
You know that game where you pretend you’re at the supermarket and you buy summat and then the next person has to remember what you bought and add summat else to the mix and the game spirals growing ever more confusing as you desperately try to absorb and recall what everyone’s adding and all the while your heads exploding just trying to think up something original for when it comes round to your turn?
Well, that’s essentially Forts: a complete brain melter.
Farm-yard folktronica, gypo punk-rock, heartfelt lullabies with pastoral textures, surf rifts, lo-fi rock, melodic pop, mutant sex-glam and quite possibly the sound of Celine Dion being decapitated by a serrated wagon wheel.
If you’re after a starting point cherry-pick The Passage and Poor Things for the opposite ends of The Boggs spectrum; the former a Four Tet groove with downbeat Karen Sharky vocals the latter a dusty, quirky Beck-a-like shuffle with spring-heeled guitars.
There’s much fun to be had but having played the Forts game for a good month I’m in need of a temple massage. Anyone got Shannyn Sossamon‘s number?
For fans of: Rubix cubes.
6.5/10 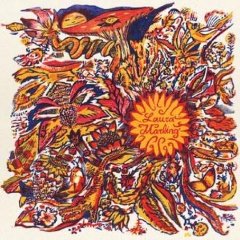 Laura Marling: Alas I Cannot Swim
Virgin Records
When Kate Nash declared at last week’s car-crash TV debacle that was The BRITS, that there is no such thing as ‘female’ as a genre, I saluted her intentions.
But to be honest, if I was a musician right now, I’d rather be dumped into this ever-growing pond of mighty madames than the rot emanating from the box marked ‘male’.
Inevitably, wee folkie Laura Marling is the latest in a long line to be lumped onto the ‘female’ conveyor belt, swiftly following on from the likes of Adele and Duffy, but the teenager from Eversley is ploughing an altogether different furrow.
Where her Major League contemporaries aim for exactly that; relying on big sounds, big voices, prime-time TV and maximum exposure (see Duffy and Adele opt for cover shots depicting themselves while Marling opts for thick colourful bursts of Van Gogh brush strokes), Marling instead strips everything back relying on her subtlety and restraint to win you over.
This approach is expertly utilised in the Suzanne Vega-esque opener and album highlight Ghosts, a galloping autumnal ode to a former lover, as Marling belies her years, proclaiming ‘Lover please, do not fall to your knees, it’s not like I believe in everlasting love’. From one so young it’d be hard to stomach were it not delivered with such effortless aplomb.
Another mini gem is The Captain And The Hourglass, with its windswept acoustics, disquieting crackle of electric guitar and the distant crashing of winds against a stormy beach cove, as Marling’s voice is pressed up close allowing the listener to almost feel the brush of her lips.
Then there’s Failure a nimble, piano-led country number with exquisite flashes of violin, which without exaggerating the point would ease onto any prime Joni Mitchell record.
So, while Nash frets about misplaced pigeon-holing, I doubt Marling would begrudge standing side by side with contemporaries PJ or Natasha Khan as she forges ahead on what could prove a glorious career.
For fans of: Fionn Regan, Shakespearean tragedies, Patrick Wolf.
7/10