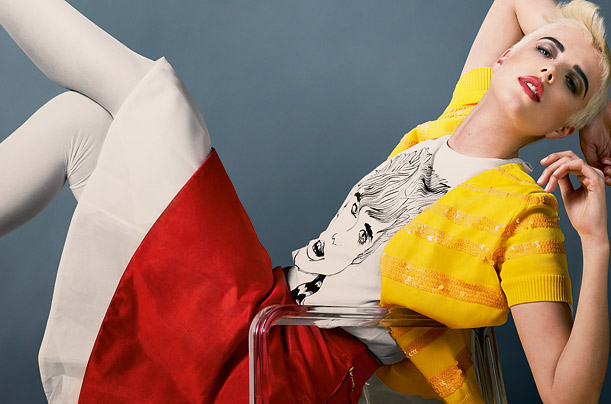 Dan Thomas wants to be touched. Don’t we all?

You can’t help your basest desires, even when it comes to music. It’s not a transcendent a force as you think.
A few months ago I was commissioned by the owner of this blog to write a piece about REM for their week to celebrate the release of REM’s latest album Accelerate.
I didn’t finish the piece; I barely even began. Words of celebration for an already highly-celebrated band seemed to form no connection to how I felt, so I made my excuses and went into hiding when the shouts came in.
What did it matter anyway, Accelerate was a grotesque parody of former glories, their tinny Pro-Tools romps seeming a pale facsimile of the triumphs of old. Talking about the hidden beauty of Fables of the Reconstruction would have served to mourn the decrepit present of REM. Besides, I was too involved with trying to get a girl to touch me.
I’d been kidding myself and others on forums and in bars when I’d tighten my knuckles and insist that music was this transcendent force, this art form beyond all art forms. Those records that ‘changed my life’ couldn’t change anything now. They hadn’t changed a thing.
In them I had recognised something I would like to be seen as too. In The Microphones a distant enigma, a fluttering behind the trees. In REM, the drunken erudition, an art student who knew about politics but knew how to throw a killer party.
Black Flag; the work ethic, the fuck-everything thunder. The list goes on. I was always the same; just the device used to kid myself everything was okay was different. I had imagined girls would touch me more for my choices, a complex sinew of careful personality accessories.
I’ve always been attracted to mayhem on wax. Instruments buried, out-of-tune vocals, performances wobbling between catharsis and crap. In the flesh it’s even more exciting. I would imagine girls would be attracted to my own mayhem (a sure sign of complexity in the most prosaic Hollywood sense) and touch me for my choices.
Maybe it always was given to us through sublimation of our desires; free jazz and soul as conscience of black emancipation. Country music (real country) as celebration of victims.
Hardcore as a desire to become victims but never being able to escape the comfort of suburbia to really stand on the edge and wonder what if? Agyness Deyn and The Five O’Clock Heroes presumably is a generation punishing itself.
A lot of boys and girls can identify and admire young attractive people as we all aspire to this. In this instance purchasing of this record allows access to a world where people might get to touch each other. Whitehouse‘s fans are disgusted by women, this is why women do not touch them at all.
After the review of Santogold‘s record on this blog, I was instantly dismissive. Her record feels as contrived as anything that passed through Max Martin‘s grasp, and packaged into a neat elegant wastage iconography, blogosphere fashion tips and pansexual appeal. This is not me and I don’t like to touch the pansexual.
On one hand, this pushes you away in terms of experience and race (95% of bloggers are white males) and on another it draws you in – this can be you with simple accoutrements of your standing.
What are we missing by neatly summarising who we are as people and what we feel about our lives if we allow ourselves to be sold to so easily? Why does Santogold‘s record, or indeed almost any record, say more about the era in which it arrives than about the topics contained within its time frame?
How many more people appear on protests against Chinese involvement in Darfur now MIA has clued us in versus how many people have developed a personal brand much aligned with MIA‘s (without the adherence to boring politics and awareness)?
And how many girls like that have touched me? I can rule myself out of that demographic and therefore the listening experience. I can write them off with only the most cursory of Myspace browsing sessions.

I saw a picture of a band I like this week. I remember being simultaneously disappointed and thrilled. They looked a bit like me. What does that say about me? Who should I touch? And who should touch me back?
I’m elongating a point. Which music you buy, and what it says about you and your experience is not the entire centrifuge in which meaningful music transactions take place.
We non-cynics would dearly like to think that most of us represent a curious sector of those dudes and ladies for whom music is more than a set of codified gestures towards representing which societal niche you can be successfully placed within (and once placed, which kinds of girls and boys will touch you).
It’s also important to resist cynicism at all costs but it’s important to understand that the very forces that feels Santogold plays so well with its intended demographic realise your aspirations; probably creative, that you want to be with a person who is also creative or at least can work in the creative industry, that you perhaps have a mild drug intake and a larger-than-average disposable income.
You attend live performances as you feel this enhances your personality, your personal brand and that socialising is very important to you. You probably even read blogs, like this one, and pass their opinions off as your own. So when one blog says Santogold rules, you do too.
No-one really returns records as they do clothes; no-one wants to appear like they don’t know what they like and dehance their personal brand. So it’s important that you can at least be fooled once – that time it takes you to buy the new record. We’ve all fallen for the great white hope of the present several times and their entries into the annals of music history gather dust time and again.
However, you want to be touched.
You want to believe that the girl you saw with the t-shirt of the band you like listens to other stuff that aligns with your personal brand and perhaps might not be reticent in touching you back.
It is base and it is entirely human. But don’t convince yourself, or me, that you bought Arular because you expect its contents to date well and provide you with lasting musical joy.
You want to be touched and you want to touch. You want to be your own brand, unique but not too much so. You can own things to make people touch you and you can touch them back, but don’t expect it to be meaningful. Just reach out and touch.