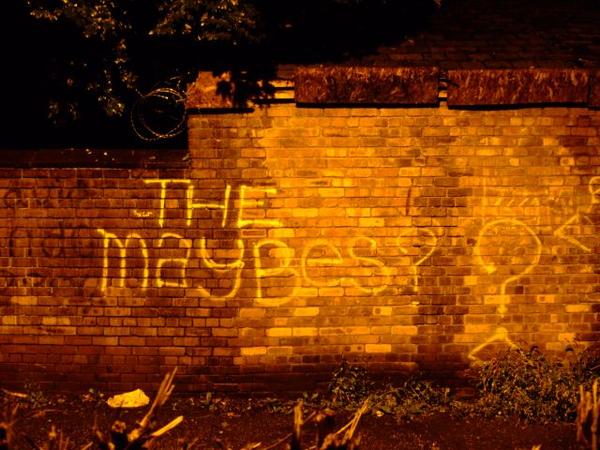 But to be honest, they don’t need any introductions. We’re past all that.

What this lot do deserve is more column inches.

The Maybes?, like so often in this fine city of ours, is a gang – and I use that word in every sense of the word – that has already built its own collective purpose – a group of tightly-knit friends that have embossed their music, presence and soul on so many people – but as is want of so many before them have yet to catapult their essence to a wider world.

A few watched in awe at Latitude. A few more at the Isle of Wight and V, yet the Kenny/Anfield crew are far, far away from stamping their identity on the world at large.
There really shouldn’t be a question. But what is the world waiting for?

The Maybes? have been waiting too long for this.

See, the story goes back. WAY back. Back to 2002 when all those walls round Liverpool City Centre were decorated with their moniker.

If you were into music and from Liverpool – whether you like it or not – you were at least aware of The Maybes?

They were everywhere. If you were somewhere. And if you weren’t, you were nowhere.

A group clearly anti-legacies. Or even spouting cliches.

They talk more of family then legend. They’re in almost opposition to the history of rock & roll mythologising – the more people build reputations, or fashions, the more they’re liable to turn a blind eye and their back on fables talking of matters close to the heart.

For The Maybes? really only want to exist in music. You can hear and see it as Nick Ellis‘s lips curve and spit, and eyes close, every moment felt. They’re all living it – standing in a line at the edge of their stage commanding, and imploring to be heard, willing the girls to dance.

A hurricane of verve. Speak to Nick for a minute and he cuts quick to the chase; music, music, music is all. And boy, does it mean a lot.

While their debut may not be the all-conquoring beast one may have imagined, it does contain one tune which should cement them as a leading light on the cusp of greatness: Promise.

0.01: From the get-go you know you’re on to a winner; deadened, thick coats of smog gacking ooze from the amps as Dominic Allen thuds the kick drum and taps the hi-hat before a menacing lick weaves an introductory wave.

1.05: The spirit of Lee Mavers injected with the fever of Chicago disco leaps through to the fore. Imagine the wonky-eyed hick duelling his banjo but replaced by an E-up John Squire, Pollicking drips of spray – it’s this relentless, flighty guitar motif that glues the epic together; dipping, peaking and chasing the high.

2.20: And we’re plunging: deep water and hazey terrain, the feet are given a momentary breather.

2.50: Timo Tierney and Lee Smith are tapping the frets; cyclical, motorik, Kraut. And swoooooosh – we’re away!

4.18: The break. As cinematic and as ghostly as they come. There’s the Man With No Name, dust curling round his spurs and sand spraying round his shoulders. Slowly chewing that cigar butt.

One for the Floyd-heads. Fascinations with Pompeii satisfied: echo, drone and the whisper of Nick Otaegui‘s bass threat barely audible. No gongs included.

6.11: Two minutes later and we’re coming up. Up. UP. Dominic’s 4/4s signal the charge as a Gilmour trip hones in on the stars.

6.53: A 30 second passage reminiscent of a pre-signed The Music with their lost New Instrumental; all one-note guitar flicks and mountains of delay.

7.37: And LCD‘s James Murphy takes control as phasers and modulators roll; unless you’re dead, the freaky dancing now in full effect. Quick nods to The Rapture too.

9.04: Stop. Tom-toms trade with Ellis’ plummage of ragged glory as the brainstorm interlude calapses to drone.

11.05: Timo and Lee’s signature cyclone re-emerges embracing the rhythm for a minutes lap of honour. Glorious.

12.00: The final straight: punching six-string jabs force their way through the wall.

The Maybes?: Rock & Roll
If you wish to write about a special track email: peter.guy@liverpool.com or leave your comments below.