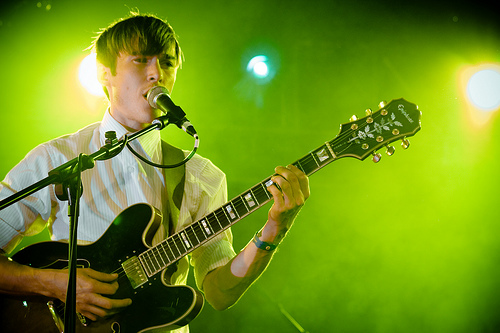 John Sergeant may be out of Strictly, but the world keeps turning…

Yes, while the world’s media took a sharp intake of breath into the day’s sensational news that the Jo Brand-look-alikey BBC political journo had jumped ship from TV’s reality dancefloor, 19 other people decided to forsake the incessant coverage and Paxman‘s grilling, in favour of a trip to Liverpool’s Barfly, where they were served up a veritable feast of quick-steps and music to warm the soul.
As chance would have it, among the small throng were the Strictly Come Dancing judges, who were gratious to add their own thoughts on proceedings. Scoop an’ a half we say!
Bill-toppers Youth Movies favour a form of Chuck Berry chicken walk (this is the correct technical phrase) to spice up their King Crimson-spazz rock as fetching elven Andrew Mears clicks his limbs with every fret-hammer and key change.
There’s much going down on their recently released debut Good Nature – never a bad thing – but while on record some of the nuance is want to be lost among the bluster, live they’re in their element as Sam Scott (only Dorothy Wizard of Oz style heel-taps on the dancing front) switches from parping trumpet to chunks of keys as the momentum builds to silvery ecstatic rushes of prog symphony.
If You’d Seen A Battlefield finds Mears wrapping his knuckles round clean Dave Gilmour licks as Al English tinkles relentlessly on the frets – a clear indication to their kinship with allies Foals – before everything collapses into a messy pile of heavy pangs and keyboard rumblings.
It’s superb – eliciting such excitement from one onlooker that she jumps on the spot for about a minute, clapping, mouth-agape like she’s just won a big teddy at the fairground.
Respite is provided in the glacial Magdalen Bridge (Len Goodman, clearly a big waltz fan, is seen nodding his approval at the back of the hall) before a near-10 minute Soandso & Soandso brings things to a beautific finale as the voices of all 19 people sing in unison ‘If you can’t please yourself then don’t try and please anyone… It bubbles and blisters!‘
There was no such flights of feet when Adam Gnade made his entrance to the stage looking like he’d just been ejected from a passing freight train; all ripped t-shirt, battered pumps and truckers hat and eyes that hadn’t seen sleep in weeks.
No Gnade specialises in the sort of leg twiddling (this is the correct technical phrase) usually associated with school children desperate for the toilet but too afraid to ask.
Fittingly, his music was of the tortured type too. Think Bright Eyes stripped to the barest of bare, with the mere hint of finger-picking and the occasional thrum.
More a storyteller – his novel The Darkness to the West is on sale at the merch stand – Gnade loving crafts romanticism with bleak humour which while almost bereft of melody is engrossing the more you give yourself to his words.
But we’re here for the Dancing! And Bruno Tonioli is visibly moved by the whirlwind tango-ing antics (this is the correct technical phrase) of Accidents Never Happen‘s Martin. A spindle of a man that would make Peter Crouch look short and paunchy, careers round the venue, climbing speaker stacks, exiting the stage – and the room altogether – wrapping his frame over the barrier and just about twacking anything within reach.
He’s joined in the crowd on numerous occasions by other members of the band and this all-action approach is matched by drummer Christian, proving his Scandinavian prowess by attacking his kit with such ferocity it’s a wonder his arms don’t drop off.
The flipside of all this is that sometimes the eyes are taking more notice than the ears and much of the music is lost to the unfolding pantomime.
Only the opening and closing numbers really strike a chord. The former a funereal dirge with droning rhythms as each member howls their lungs out, the latter a chaotic blast of three-way guitars recalling the Cooper Temple Clause at the height of their powers with a climactic drum solo which is so impressive even bassist Jesper looks stunned.
The night was completed by Wirral’s My Amiga; think Mae Shi without the theatrics, all fizzy-pop mathletics and shit-eating grins. They’re way fun shame the wide-legged guitar stance (this is the correct technical phrase) was their only move on offer.
And finally, as promised, a word from the judges:
Craig Revel Horwood: A total disarrrrstaaar. Not enough bottom movement.
Arlene Phillips: *fixing botox* Wonderful, a revelation!
Len Goodman: Well, I couldn’t ‘av asked for mowaaa! SEVEN!
Bruno Tonioli: Truly fabulous! Belissimo!