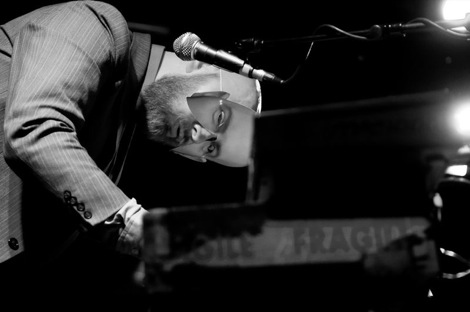 June on Getintothis is new music month: everyday, along with the usual comment and discussion, we’ll be rattling off a long-player review of what fresh on our juicebox. First up the hometown boys that caused a stir at Sound City 09. 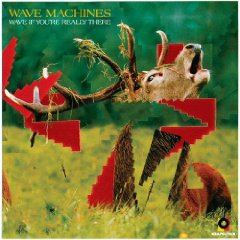 Wave Machines: Wave If You’re Really There
Neopolitan
One of the funnest things of late was watching White Lies dullards having to explain away their dicks twitching while watching Wave Machines at the O2 last week.
All they’d come for was some seriously flaccid grey tuneage and yet by 9pm they’d a semi and started questioning their sexuality.
See, effeminate pop is a goer. Think of Bowie mixing up alien androgyny as Ziggy or Prince morphing salacious sleaze as Camille during Sign O’ The Times.
Indeed, even on last year’s For Emma, Forever Ago, Bon Iver‘s most sappy of topics – losing his girl – was lent an added dimension by his haunting falsetto.
Liverpool’s Wave Machines recognise this and have injected their blend of angular power pop with a camp perversity ideal for arresting listeners of any persuasion – and Wave If You’re Really There is seriously bent.
Take Keep The Lights On, a disco cross-dressing stomp with nylons and stiletto heels as Tim Bruzon provocatively suggests to ‘hold your throat and lead yourself astray, while 80s drum machine and vibraphone thuds hard and heavy.
During Sound City several of our group attempted to describe their sound to a first-timer: The Bee Gees, Midnite Vultures-era Beck, Prince doing Dirty Mind and even The Scissor Sisters (hilariously) were offered up – all of which points to one of Wave Machines strongest assets: they sound little like anything resonating from these shores, let alone Liverpool.
Who else has released a single as magnificently bracing as I Go I Go I Go this year? With its irresistable squelchy hook and catchy-as-hell chorus it has summer written all over it.
The same goes for penultimate track The Line; Bruzon on the offensive with his punchy girly voxs backed by piercing neon synths and fagrock swagger.
Further evidence of their deft way with melody is cemented mid record in live show closer Teen Spirit, a track which has been doing the rounds since early 2007 and yet has lost none of it’s simple beauty, all ahh-oows and that killer line Where’s my punk spirit, when I need it!,’ building effortlessly to stunning effect.
Such is the weight of winners on Wave If You’re Really There, the misses stand out a mile, but really as a debut this is close to faultless as you can get; fun, frivolous and foxy as hell.
8/10
For fans of: Unicorns, Chic, swingball.