The UK’s most inspired and entertaining spectacular goes from underground to overground as it’s New Year’s Eve show sells out in minutes. The Kazimier – a Liverpool legend in the making – goes POP!

So, remember when we spilled the beans on Liverpool’s best kept secret back in April?
Well, that secret is SO not a secret anymore. There’s been several more parties, numerous happenings, in-house band Dogshow stormed Liverpool Music Week and now there’s a New Year’s Eve show.
A New Year’s Eve show which sold out moments after it was announced.
But don’t think, (as has been suggested in person and on these pages) that we’ve gone and ruined the party. Or that The Kazimier has outgrown its magical and mystical roots.
No, The Kazimier is as alive, inventive, seriously hip and downright fun as its ever been. It’s just that the word has filtered through the artistic undergrowth (and regional press) meaning more cats are eager to play.
If anything, the last Kazimier, which combined Victorian costume with a delirious ride into a psychonaut’s mind, was their most whacked out yet. Three-legged mutant ballerinas, mechanical ship wrecks, birdmen tapping their beaks against outsized cymbals – simply another stop on Kazimier’s uber-surreal odyssey.
And so to December 31. Details are, as is Kazimier’s style, being teased out.
Here’s what we know:
Showing at the Kazimier Picture House, 31st December
“the adventure millions have been waiting for…..essential viewing”
“a tale the screen was made for… an emotional rollercoaster sure to leave audiences coming back for more…”
Our story unfolds on the site of an extra-terrestrial landing, a smoldering futurist space craft lies on the rooftop of an old art-deco cinema. Government scientists and specialist investigation teams have failed in futile attempts at communication with those on board with all hatches remaining firmly sealed. Unconfirmed reports suggest this could be the missing Kronos Discovery that lost contact around 1 year ago. The visitors’ objectives are not clear, but they have hijacked the projection room and appear to be retrieving information about life on earth through long probes that are scrolling through the cinefilm reels. Due to unforeseen interference from the visitors, audience members are warned that images appearing on screen may become a living reality.
Join us in ‘The Kronos Returns’…
Make of that what you will, in the meantime, if it’s anything like last year, we’re in for a treat. 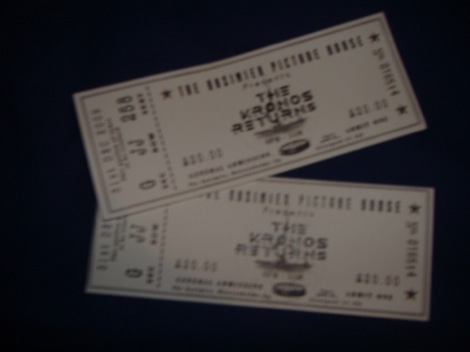