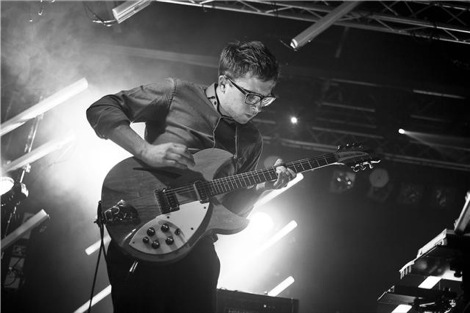 Getintothis’ Mike Doherty on the Manchester showcase which infuriates and impressives in equal measure.

The last time Egyptian Hip Hop played Liverpool, it was in mid February, at the now flambÃÂ©ed Korova venue. At the time, this quartet of precocious Mancunian teens was the freshest of new band meat.
Still in college and with only a few demos to their name most of which were instrumental sketches, they’d been showered with NME hype despite being in their absolute infancy. Tonight, they’ve definitely grown. Their buzz must have spurred them into writing words to go with the instrumentals that got the press so interested and the ear for melody and groove has been upped to a level that competes with the new Mystery Jets material.

Tonight might as well be a Manchester showcase, and fellow Mancunians Everything Everything and Delphic both delight and disappoint in equal measure.
The former show flashes of brilliance, but they’ve got a disposition to play weak synths, half-baked ideas and enough irritating whistles and yelps to think that they’re fronted by an injured robot. Their influences seem too broad to be able to create something cohesive. They’re sometimes electro, sometimes rock, sometimes dance floor filler. Or to put it another way, a bit too much of EVERYTHING.
Tonight’s line up could well be a time line to show how the hype machine operates. Egyptian Hip Hop the young upstarts, Everything Everything the band with decent air time and an album deal on the way, then Delphic the phone advert-soundtracking, omnipresent Greek gods of the music zeitgeist. Their disco shtick is tight, desperately infectious and polished. For these are vital elements that their contemporaries lack and they clearly love where they are in their career right now.
Red Light is turned into the euphoric moment it always threatened to be on record, Doubt is ripped up and torn apart in to a six-minute dance floor wonder. Bodies genuinely move for these tunes.
However, their support may be in flux, as for most of the night, the crowd seem largely disinterested, using the chorus of the tunes they’ve heard on the TV as their cue to dance a bit, then standing almost static waiting for the next time they’re allowed to dance. Very polite, orderly and um, halcyon.
Photos courtesy of Matt Thomas