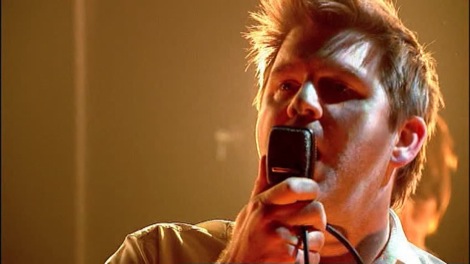 A night to remember, as James Murphy’s LCD Soundsystem sign off in style.

When James Murphy announced This Is Happening was to be his last in the guise of LCD Soundsystem initial disappointment turned to quiet satisfaction.
If you’re going, go in style. And with a track record few can equal, it’s easy to see why the 40-year-old wants to dispense with his band and concentrate on shaping a fresh future.
After all, as he’s constantly at pains to admit, he’s been losing his edge for quiet some time.
Not that it’s stopped the world’s of rock and dance cribbing almost every cough, sniff and cowbell from his routine – as evidenced by his DFA label mates, and tonight’s support, YACHT; who’s pleasing take on the punk-funk, skip-to-the-beat, NYC bounce lifts almost identically from LCD’s blueprint.
Closer Psychic City, replete with stonking HUH’s and honking AYE EY YAHs, comes to soon as we’re invited to come round and bake cakes together – we’d love to get involved.
But hang on, there’s more pressing matters as a procession of white clobbered musicians take to the Academy boards. Murphy, seemingly rocking the hungover lab technician look, appears somewhat overawed by the lavish reception as Gavin Russom starts the dance.
Thick and fast, teasing, snaking beats grind to the core before a shower of emotion as the heaving mass of bodies proceed to workout in unison to the likes of Us v Them and Get Innocuous!
It’s evident just how canny Murphy and co are at slowly building up simple rhythms, allowing bobbing heads to kick on to flailing arms and bending legs before blasting the senses with a great release which sends limbs into delirium.
Witness the mass air-punching of the quiet stunning All My Friends or Murphy’s jumbled monologues on new classic Pow Pow and golden oldie Losing My Edge – as they’re incomprehensibly mumbled back in unison.
If there’s a fault it’s the slumbering I Can Change, too in debt to Bowie and too meandering for the majority to care but it’s quickly forgotten as Tribulations snaps us out of temporary psychosis and sends us headed for the stars.
The occasion reaches its pinnacle when the near-15 minute Yeah is given a full outing; all light-sabred fizzes and ear-splitting synth stabs throwing up images of early 90s warehouse parties as the place turns into a pool of condensation.
Someone Great‘s low rumble retains it’s powerful majesty and an almost tearful finale of New York, I Love You But You’re Bringing Me Down is an apt a closer as we’re ever likely to witness.
LCD Soundsystem – it’s been emotional, but please – no reunions, no ATP curatorships, no ‘one last hurrah’ – you won’t ever top this.
Setlist:
1. Us v Them
2. Get Innocuous!
3. Pow Pow
4. Daft Punk Is Playing At My House
5. Yr City’s a Sucker
6. Drunk Girls
7. All My Friends
8. I Can Change
9. Tribulations
10. Movement
11. Yeah
Encore:
12. Someone Great
13. Losing My Edge
14. New York, I Love You But You’re Bringing Me Down