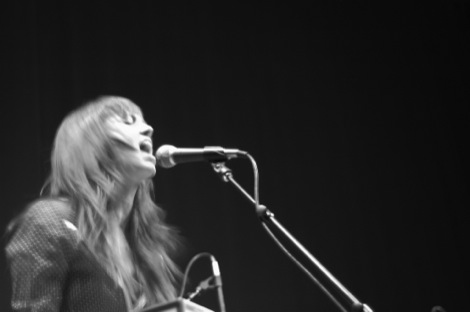 The Masque gets treated to some screech, Liza Williams reports from underneath someone’s armpit.

My view could have been better. The Masque had set up their loft venue so about three people could see each act. The stage had been shunned for a more school sports hall style set up, and the only people with a good vantage point were the sound men. Maybe they knew the bassist in third on the bill Dire Wolfe was opting to wear shorts that evening, and wanted to catch a glimpse of his pins.
But I did manage to jostle for a spot underneath someone’s arm pit in time to catch the second band of the night, Ticks. Formerly The ASBOS, the boys have plumped for a new term of socially unaccepted behaviour to brand their dark style of synth pop. And it was solid stuff from the red waist coat clad five-piece.
Next up were the aforementioned Dire Wolfe. The informal sports hall thing worked well for them, and there was a lot of interaction with the crowd. The rousing guitars of Come Home and Gloria sounded impressive, with lots of harmonised vocals.
So infectious that half the crowd decided it couldn’t be beaten and left. And as this happened the next bands moved up on to the proper stage, doubling the empty space on the floor. It was unfortunate because the penultimate act, Yuck, were impressive. The New Jersey four piece soldiered on, with their Dinosaur Jr-inspired American indie tunes. The Wall was the stand out track in a set owing much to the sound of the late alternative 80s.
The drummer also had the best white man’s afro i have ever seen, like a perfectly round halo.
Luckily the venue had filled up again for headliners Times New Viking. They crashed on stage with their loud, lo-fi sound that left my ears ringing. The Ohio three piece sped through their set with few pauses and had a real energy. Beth Murphy‘s keyboards are unmistakable and lead each of the impossibly catchy yet raw songs. The DIY spirit of TNV’s tunes is so joyful and the lack of polish is what made the set.
If you closed your eyes they could have been playing toy instruments – in fact Murphy did almost look like a little girl with her plastic Christmas present in tow. Tracks like No Time, No Hope and Move To California didn’t disappoint. At a couple of points though the sound was rawer than even they wanted, and adjustments had to be made to stop the feedback completely drowning out the melodies. It is a fine balance that the band managed to pull off during the majority of the set to great effect.