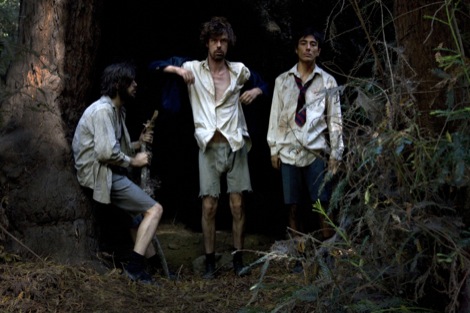 Your chance to win subscription to Liverpool’s finest music magazine, signed poster and tickets to the gig of Liverpool Music Week. When we say this aint one to miss, we’re not fibbing.

When Mike Deane, Liverpool Music Week‘s head honcho, approached me over posh sarnies a couple of months ago to curate a handful of gigs during the festival’s month-long programme I was understandably delighted.
When the name Liars was dropped, it’s fair to say we were bowled over.
Not only have they produced one of my favourite records of 2010, but they’ve been a mainstay on the Getintothis jukebox for the last decade.
Working alongside Liverpool music magazine Bido Lito! editor Craig Pennington and Samizdat promoter Andrew Ellis we devised a Liverpool-orientated bill suitably stunning to support one of New York’s most innovative and thrilling talents.
Mugstar were first out the hat. Following the recent release of stunning new record Lime, this a band that specialises in devastating sonics and incredible live visuals making them a natural support for one of New York’s finest.
Getintothis‘ favourite new artist, Forest Swords, was another obvious selection. Despite having yet to play live, Matt Barnes‘ genre-straddling drone-step is making waves both sides of the pond – and this early DJ/audio-visual set will give fans the chance to see a developing talent in the making.

We Came Out Like Tigers and Loved Ones wrap up the bill like Larry Holmes‘ knockout jab to the jaw. The former I recommended to NME‘s Jon Hillcock and he was so impressed he played them twice in a one hour session, the latter is Seal Cub Clubbing Club‘s Nik Glover‘s enticing new side project.
Not bad, eh?
Anyways, enough of the preamble. You get the picture, this is a bit of a special night, and Getintothis has a pair of tickets up for grabs. Not only that we’re throwing in a signed poster of the evening designed by Liverpool’s premier music artist, Gary McGarvey plus a six month subscription to Bido Lito!
You’ve read this far simply because you want need to go. So here’s the deal, add Getintothis on Twitter and tell us who played Billy Liar in the 1963 film directed by John Schlesinger.
For those of you that want to guarantee entry, ticket details are here. Doors are 7.30pm til late.