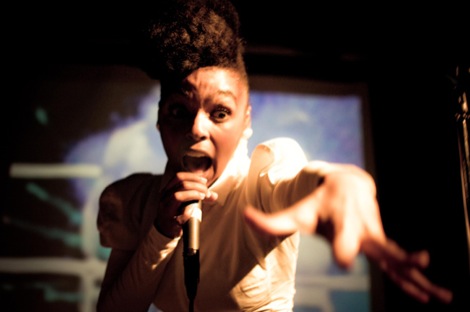 ‘Dance or die,’ commands the imposing face of Cindi Mayweather from a giant projection screen above the stage of Manchester Academy 2 – a room formerly used as the University’s debating room.
Tonight we will dance – and there’s little room for debate that we’re bearing witness to a new popstar phenomena in waiting.
The booming Mayweather – the android persona behind Janelle Monae‘s Metropolis concept and stunning ArchAndroid debut album – kick starts an hour showcase of blistering, nailed-down performance pop.
Monae’s influences are naked for all to hear – the otherworldly chameleonic rock of Bowie, the tight funk of Prince, James Brown‘s moves and capers with a velvet black cape and the insistent soulful Motown swing, yet the 25-year-old from Kansas City has an infectious likeability, a pocket-rock-wanna-put-her-in-your-pocket cheekiness and a raging ambition which easily identifies her as a huge star in the making.
Following her Sunday night Shepherd’s Bush Empire gig in London, one critic levelled her lack of communication with the audience (there was none – yet this never stopped a young Prince; he a noted admirer having already invited Monae to support on a string of dates for his next tour) and the exact, near-stage school routine, as reason to doubt her potential – however, this is exactly the kind of delivery characterised by top-of-his-game James Brown, the master of metronomic funk so tight you couldn’t spot the gaps or pause for breath.
Here we’re treated to an opening in the greatest traditions of the Godfather of Soul, as a four-track segue of Suite II Overture, Dance Or Die, Faster and Locked Inside steamroll their way into each other while Monae throws her moves, lashes her vocals high into the heavens and punches her diminutive stature this way and that as half the audience take to their tip-toes for the next 60 minutes vying for a better view. She really is that dinky – and were it not for her trademark breadroll quiff bouncing about you’d barely be able to keep track.
What strikes you other than the quality of the tunes (tonight she sheds the peripheral fillers which ultimately stop her debut from being an all-time classic) and musicianship is that this is surely one of the last times you’ll see the Grammy nominated star in such surrounds – and in a strange way she would be all the better in a bigger environment – her ideas tripping off the stage as a procession of cloaked skeletons and dancing demons in hoods are barely able to swagger around her extensive band on this tiny of stages.
Then there’s the psychedelic drone of Mushrooms and Roses as she takes to an easel and paints unidentifiable squiggles. They look like two big nipples from where I’m standing.
This stagecraft ties in with tonight’s opening which saw a top-hatted, mustachioed band leader implore us to shout her name as he rallies the sellout crowd while her band work overtime in the moves department.
There’s only one moment of calm – during an effortless rendition of Charlie Chaplin‘s Smile backed by a stunning woozy bluesy guitar solo before whoops and cries of ‘We love you Janelle,’ interupt the kind of vocal that’d have X Factor judges in floods of tears while cheering in unison from atop of their table.
After an electro workout of Wondaland and a thrilling Cold War that has a suited up city type to my right sweating his life away as he attempts to ape Monae’s moves, she exits to a burst of Hendrix‘s Purple Haze before, upon her return, balloons fall from the sky amid the clatter of one of the singles of the year – Tightrope.
Closer Come Alive (The War of the Roses)– aptly supported by visuals of Mohammed Ali raining thunderous blows from inside the ring – sees Monae’s immaculate coiffure in disarray, shaken beyond recognition, as she metamorphosizes into furious delirium before a final BOOM – and with that she’s gone back to plot worldwide domination. Make no mistake Janelle Monae is one to watch.
Setlist:
Suite II Overture
Dance Or Die
Faster
Locked Inside
Smile
Sincerely, Jane
Wondaland
Mushrooms & Roses
Cold War
Tightrope
Come Alive (The War of the Roses)
Getintothis review of The ArchAndroid