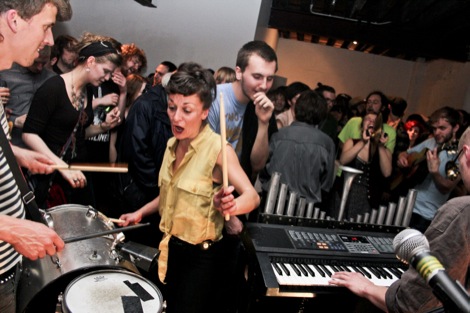 Getintothis provides all the sights and magic from FIESTA OBSCENIC 2011.

Take one whopping warehouse, around 30 bands, throw in a couple of hundred music fans, a jumble sale, one purple bike and lots of laughter – all in support of the Red Cross – and you’ve a recipe for Grade A Good Times.
Saturday’s FIESTA OBSCENIC 2011, proved one of the music highlights of the calender yet again. Here’s Getintothis‘ two-part rummage through the wreckage aided with fabulous pictures from Dani Canto and in part two Nicola Leigh. 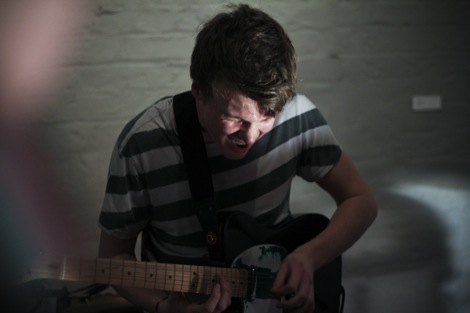 This is our first viewing of Chrik. Shameful stuff as they’ve been doing the business for years. Gutted too, as in the confines of the Creative Space’s ‘crackden’ they blow the place to bits.
Like Shellac on sherbet they have people clambering on top of beat-up couches and wriggling over strewn mattresses as the duo drop superfast axe chops and backhand cymbal slashes.
http://www.myspace.com/chrikmusic 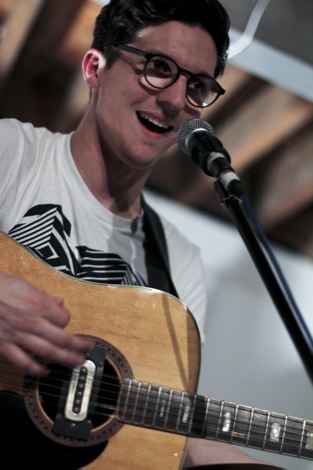 Kinda like FIESTA organiser Joe Wills‘ able deputy, Dan Croll has stepped out of the shadow of former band Dire Wolfe to forge his own Liverpool field. There’s few songwriter’s out there that have enough wit, deft lyricism and understated charm to match the young LIPA whipper and today he’s clearly relishing playing to much of his chums.
We’ll forgive him for love-in, for the music overrides any sycophancy and despite slight cock-ups and backslapping galore his brief turn is littered with loveliness. Aww. 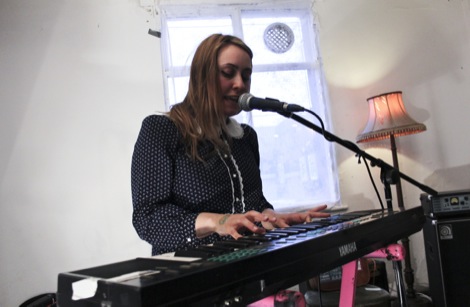 Speaking of lovely. Stealing Sheep. Can I direct your next video and we’ll just spend two days rolling through a lavender-filled meadow? I’ve consulted Sian Lloyd and she says next Thursday is gonna be way sunny.
You bring the 100% good vibes, bell-bottoms and tamborines and I’ll bring the picnic. 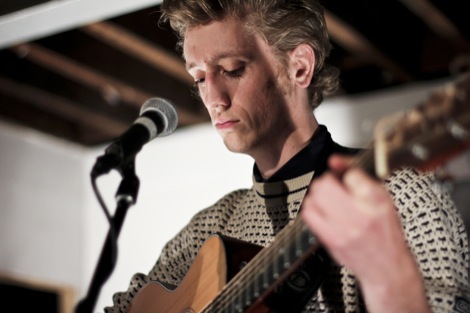 A quick rummage through the jumble sale and a lottery ticket or three bought, we catch a blind boy smashing hell out of a pinata. We then venture outside only to spot a man wearing a jacket made completely out of ties – wasn’t that a scene in last year’s Apprentice? 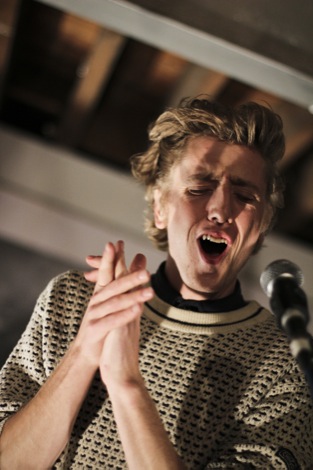 Anyways, Homestead are the OBSCENIC’s wrong turn. Like an end of year ‘performance’ strictly for class-mates and dribbling parents, they waft of Jamie Cullum‘s toejam and upper middle class cheeks which have been mollycoddled my mother’s scone-smeared handkerchiefs.
We quickly leave as to not vomit over the mass of cheeriness and Urban Outfitter’s vintage clobber. 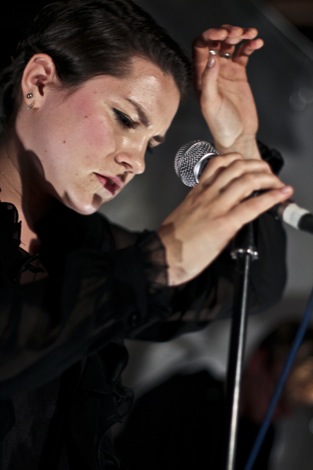 We duck out for some Tandori mushrooms at the Egg Cafe, thus missing Anna Lena and the Orchids… 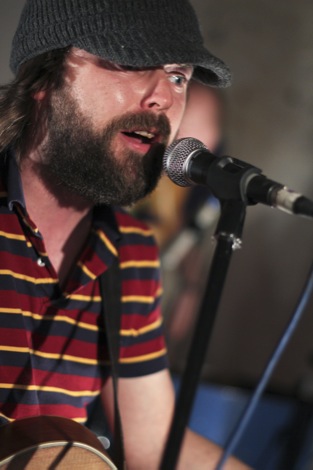 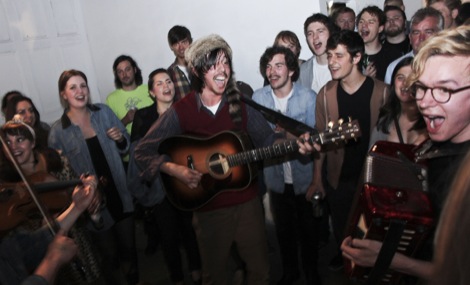 … and James Canty… Boy, those mushrooms rocked. But we did get a Getintothis exclusive while we were there.
Sun Drums Sam and Jacob both (BOTH) drink tea with their tea. Yup, hot drinks with hot meals. What kind of culinary rule breaking is this? And it hardly befits their folky, post-chillwave credentials now, does it? Shocking. 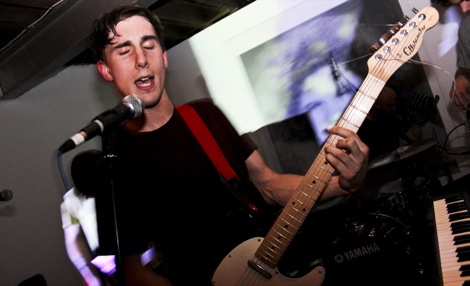 We arrive back just in time for Outfit. Or ‘Surprise Band #2’ as they’re dubbed on the setlist.
When Getintothis caught them at their debut gig we liked them. Quite a few were eager to say the former Indica boys had strayed into too-pop territory.
Ye have little faith. This, their second outing, is a revelation. Backing their recent shoutout in the pages of NME, Outfit ooze charm and got-it-together funk. From the moment Every Night I Dress Up As You drops, heels are being clicked, arms are jiggling and there’s a tangible air of summat spesh.
Mother Earth‘s Jay Freeman gurgles to me something about Out Hud. I’d argue Roxy Music and they’d slot rather beautifully onto the bill with Metronomy.
Either way, come close they’re the talk of the mid-evening banter and the recently announced support slots for Clinic at Sound City (a night in which Getintothis is hosting, YAY) and Ladytron at St George’s Hall can’t come quick enough. 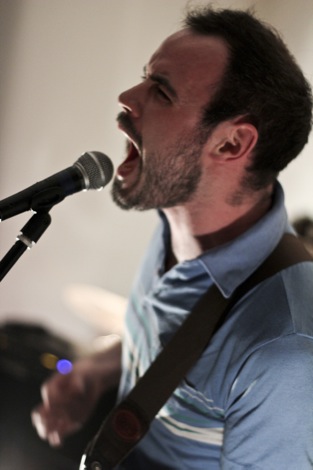 Vasco de Gama made me go hmmm. I’ve not yet decided if this was a good thing. 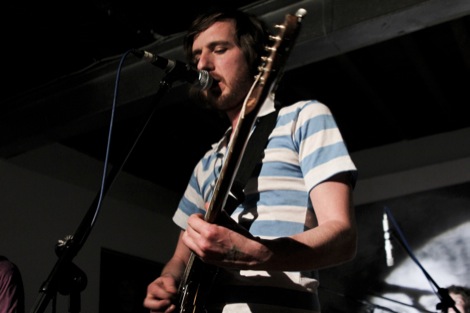 Wave Machines are probably Merseyside’s most underrated band. Or maybe just undiscovered. You’d not know given that the first three rows are singing all the words to tracks off their debut Wave If You’re Really There.
Tim informs us that their OBSCENIC gig is a test lab for new tracks and they fair just swell. Not quite barnstorming, but it’s early days. Certainly they’ve thumped up the keys and there’s a certain coherency running through the four newies.
I like the bits where James and Carl press buttons on their keys and suddenly Fuck Buttons enter the fray. As ever, Punk Spirit is whipped out for the finale and everyone in the room goes a little bit silly – it’s great to have them back.

We venture downstairs to find we’ve been magically transported to Eastern Europe. Well you’d think so, given the Kazimier Krunk Band‘s umpah boom-tish. Lovely though it is we bid the party adieu with the words from the first band we caught, Crushing Blows, ringing in our ears.
‘Everytime we come to Liverpool, the bands are super-tight and the crowds are amazing. We’d love to live here…’
Here’s some more of Dani’s shots… 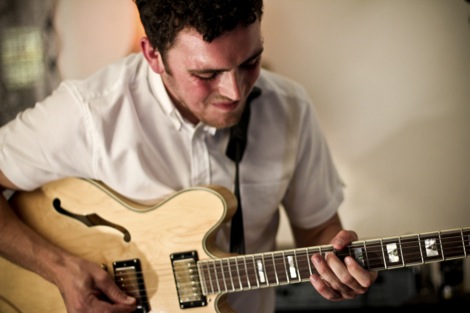 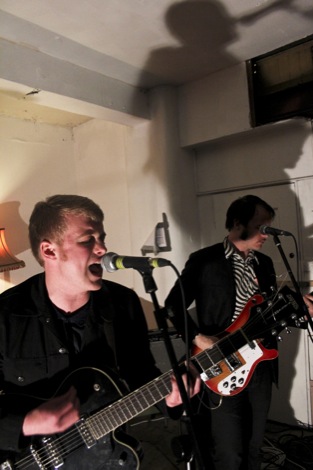 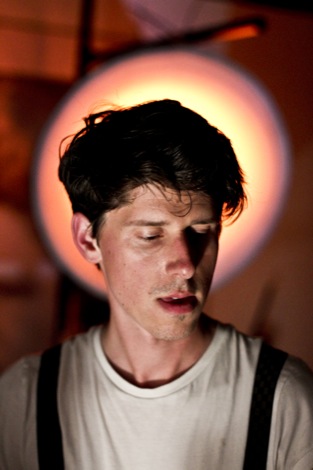 Dogshow.
Special mention to Priya, Joe, Caroline and all that made FIESTA OBSCENIC 2011 a real treat.