…So anyways, as you’ve gathered there was quite a bit on at the second FIESTA OBSCENIC and like all music festivals it over-ran, bands pulled out, the sound was shocking and by 8pm we considered packing up our tent because we were covered head to toe in cow shit.
HA! WRONG! None of that happened. It was indoors! We didn’t even get wet…

…Only we did. We nearly shot off in our pants to the primal epiphany that is We Came Out Like Tigers. They should really be called We Came In Our Drawers Like Pubescent Boys Knocking One Off Over Razzle.
The honesty, passion and downright sheer magnificence WCOLT offer is like little out there – certainly no-one on Merseyside can rival them for nerve-crushing intensity and the near-religious experience this lot bring to the table.
For 20 minutes everyone’s rooted to the spot as Rik, Mykle, Fabian and Simon ruin the senses – the only worry, a five-year-old’s hearing – as he stands front row, mouth agape wondering what mummy’s subjected him to. He bloody loves it. He has a Superman t-shirt on, of course… 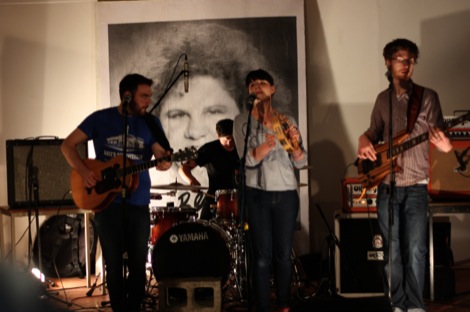 What with everything running perfectly to plan, our misguided belief that if we turn up 20 minutes later than the bands are scheduled to play would result in us catching 100% Fuck Off – this plan worked like a dream, except the bit about everything over-running, so we missed 100%FO, their baby-grow outfits and rolling about on the floor – and as a result we were a tad peeved off to say the least…

…Our overwhelming urge to cry is tempered by Derbyshire’s Crushing Blows who combine hyper-kinetic chord changes, rhythmic ferocity and the kind of riffs Pulled Apart By Horses would die for.
There’s much jumping about, a healthy gushing of sweat and even a smidgeon of playful guitar clangs to satisfy those of a more melodic disposition. One of the day’s highlights for sure. Can someone book them, please? 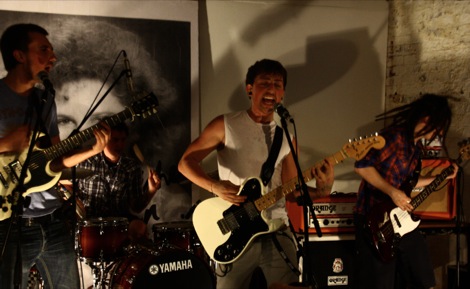 Jean Claude God Damn: boss name, bad music. Unfortunately the ‘Damn are seemingly living in 2003. All the chunk-crust-metal-wank leftovers from that post nu-metal/early emo scene have been scraped together and dumped on their doorstep.
When the lead singer berates the entire crowd for not showing at their recent gig he’s corrected by two girls on the front row saying – ‘We were there…‘
‘No you weren’t,’ he spits back, underlining the statistic that 67% singers are complete dicks.

Here’s another picture of Stealing Sheep being adorable. Swoons just out of shot.

Serious Sam Barrett
I’m not quite sure where I was during the above two. There are three possibilites:
A) Listening to complete and utter nonsense from Mother Earth‘s Jay Freeman. B) Talking to Tim Wave Machines about their new album and our lunacy at Dubai Sound City. C) Having our inner ear drum completely demolished by Stig Noise. Either way, we missed ’em.
Here’s some more rather fine pictures courtesy of Nicola Leigh.

Anna Lena and the Orchids

Emily and the Faves 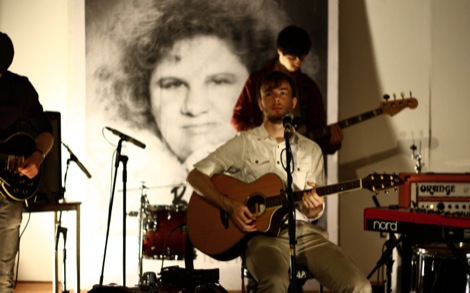 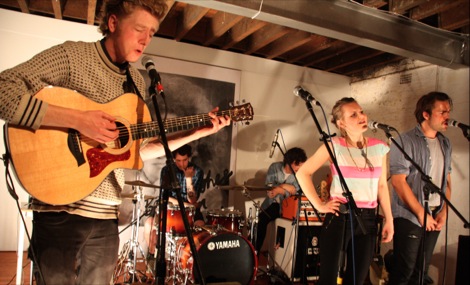