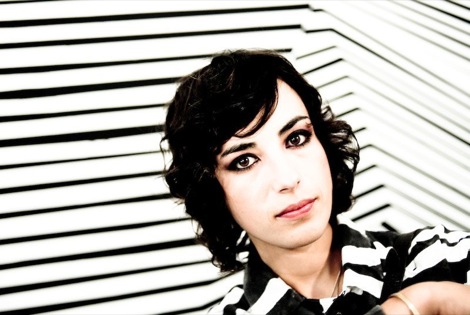 Earlier this week, Getintothis chatted in depth to electronic legend John Foxx.
Now the big man has teamed up with Ladytron‘s Mira Aroyo providing us with a nifty remix ahead of his Liverpool date.
Here’s what she had to say:
‘Working with John and Benge on the track ‘Watching A Building On Fire’ was really fun. I gave them a few riffs to choose from, they built a song around one of them and I went in to record vocals.
‘I was pretty blown away by the studio. I hadn’t heard about it, though I think I might have seen it on TV, but not realized. It is a total treasure trove! I felt like I was in Charlie and the Synth Factory. Both John and Benge were really mellow and nice to work with.
‘I loved how organic everything was recorded, from synths to vocal effects. I think that is quite rare in electronic music nowadays and you can definitely hear it in the finished record. I met John quite a few years ago.
‘I was a fan of his first solo record and was asked by a magazine to interview him about his favorite sound. We got on and kept on bumping into each other here and there over the years. It was a real honor and a pleasure to collaborate with both of them. I look forward to working with them again.‘
Enjoy.
Watching A Building On Fire (Grayed Out Mix) by John Foxx And The Maths