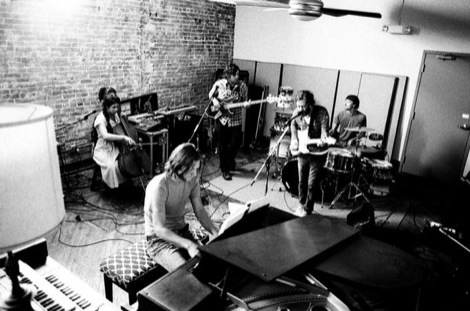 Teasing melodies and a honed magnificence, Other Lives bring their distinct brand of Americana to Leaf. Getintothis’ Matt Eland strains above the Saturday night drunkards.

If Bon Iver had hiked to that cabin with Yeasayer and a car full of dodgy South African painkillers instead of a shotgun and a sleeping bag the end result might have sounded a bit like Other Lives.
There’s an odd vibe tonight though, upstairs in Leaf café. Maybe it’s the high ceiling. Maybe it’s because it’s a Saturday night and everyone’s pissed and having a good time. Or perhaps I’m just grumpy because there’s a drunk middle-aged woman who keeps bumping into me.
But the atmosphere seems to jar with the insular and precise way they go about their music, which raises an interesting dichotomy; the big catchy anti-choruses seem to be fighting for space alongside the head-down one-hand four-instruments concentration. What kind of a band are Other Lives? Are they a torch-lit secret under the bed sheets or a dark-horse stadium support act?
The Sundowners kick things off. They’re strangely appealing despite not having much in the way of originality and their 70s-tinged Americana hits the mark most when they go into the minor keys.
If anything they’re a bit too squeaky clean and their set could do with a bit more risk; Alfie Skellys’ soloing is skilful but immaculate, and they don’t stray too far from their comfort zone.
One thing about Other Lives is certain – the album, Tamer Animals, is pretty good, perfect with your headphones on and the world receding around you, teasing out melodies where you least expect them.
I had wondered how they’d pull off some of the sounds on the record, but between the five of them they each manage to play an impressive array of instruments without losing any cohesion.
This isn’t like Arcade Fire run-to-the-next-one guitar-swapping; the place of every glock, timpani and trumpet has been precisely and carefully selected.
You can’t help but think of the hours of practise that goes into learning an instrument and the subsequent hours that go into tying all of that together.
It’s a bit sad, therefore, to see them in a room full of drunks loudly proclaiming how good they are – while they’re playing.
Aside from all that, the band themselves put in a pretty good shift and the volume is impressive even if (and this doesn’t usually bother me) they sound exactly like the record.
If anything, come to think of it, this is one of their main strengths. You’ll hear these songs before you listen to them, in the same way that Sigor Ros and Mogwai get used in so many adverts.
They tread a familiar vein but they do it well and I’m looking forward to seeing them again.
But maybe in a Bedouin hut or – somewhere else with a lower ceiling – next time.