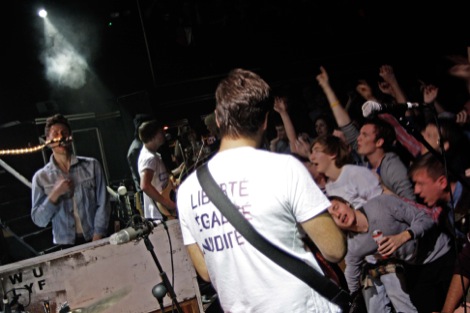 Manchester’s next big thing, WU LYF, take to the Kazimier – but is this what the world is waiting for?

You have little idea how difficult it is attempting to make arrangements for Stone Roses reunion tickets while holed up in a hotel in Turkey.
But that was my number one priority last week when I should have been soaking up the sun and five-star all-inclusive benefits of a gaff in Antalya. Oh the woes of life are such a strain…
Anyways, a week later, one trusty pal’s internet game of hitting his computer’s refresh button and the euphoria of snaffling up Heaton Park tickets, and we’re back in the Kazimier watching Manchester’s big new hopes – World Unite Lucifer Youth Foundation. Or plain old WU LYF to their mums.
And despite their insistence that they’re cut adrift from Manchester’s present, and entirely disinterested in its musical past, there’s more than a swaggering independence which can be drawn between today’s bright sparks and the Godfathers of their hometown.
For one, like the Roses, they thrive on being a stand-alone band, eager to distance themselves from what little scene exists in the city, citing SST Records as more of an influence than Manchester’s music heritage.
Secondly, they’re an infamously enigmatic bunch that’s revelled in a cat-and-mouse game with the media revealing little while teasing with quasi-religious philosophies. Early press shots saw them hiding behind masks and veiled hyperspace messages.
But the biggest parallel between the two is ultimately their gang mentality. Where the Roses promoted One Love and 12″ bell-bottom flares as Reni hats became de rigueur among their hardcore following, WU LYF formed their Youth Foundation, showering fans with their own illustrated bandit mask and exclusive 12″ singles.
The unique connection between band and following has paid off bigtime with a run of packed out gigs culminating in the 2000-sellout spectacular in the Great Bridgewater Street road tunnel as part of the Manchester International Festival. 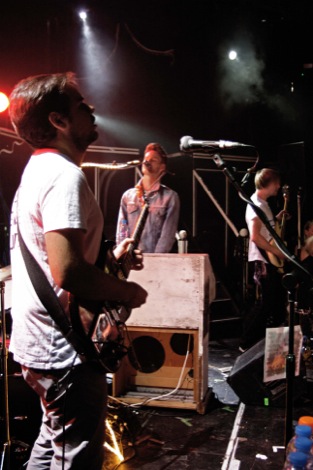 Ellery Roberts.
Of course, these comparisons would be neither here nor there should the new kids on the Rusholme block be rubbish. Thankfully they’re not. And tonight, as well as the white and blue WU LYF scarves being out in force, so too is the heavy pop tunes they’ve come to promote through superlative debut Go Tell Fire to the Mountain.
After Young Montana‘s one-man jumble of glitch electronica, which delights for 30 minutes before losing our attention as it’s just another bro with a laptop, the WU enter to their calling card of fans ‘woooooo-ing,’ like maimed puppies.
Big dog and chief woofer, Ellery Roberts, wastes little time serenading his pack of hungry mongrels as that delicious organ wafts in the intro of L Y F before letting rip for the first time with his larynx-shredding rasp.
‘I love you forever,’ comes the characteristic Cookie Monster croak – and thrown back the wolves howl in unison.
It’s not since the days of Rock And Roll Star that a group of Mancunians produced such a frenzied opening number – WU LYF are here to unite.
And for the next hour, Roberts is seemingly preaching to a communion long-since converted – every grizzled, incomprehensible whiskey-drenched enunciation is hollered around the Kazimier as sweat pores from the forearm of guitarist Evans Kati you can almost catch a glimpse of fans’ tongues lapping up his salt.
Such A Sad Puppy Dog exploits their want for melodrama; mini-epic as Kati applies the minor chords and Joseph Manning‘s punchy, deliberate marching drums dictate a hymnal ballad for the kids to hug in faux misery. Summas Bliss‘ – a faraway cousin of Animal Collective‘s Summertime Clothes – sees Roberts send his fairy-light decorated microphone crashing to the floor as he ramps up a fervent organ riff forcing the frenetic security to clear the tidal wave of bodies from the drowning lip of the stage.
Highlights are continual – 14 Crowns For Me And Your Friends has Roberts beating his chest, almost willing his lungs for more power while bassist Thomas McClung appears on the verge of tears, Spitting Blood is as euphoric a song can sound while evoking images of being battered in the gutter and there’s a nifty reworking of Chris Issak‘s Wicked Game which retains it’s darkness but emerges from the stained pants of Tom Waits after a particularly unhealthy session on the New Orleans tiles.
Yet for all their obvious charms, innocent arrogance and heavy pop, WU LYF aren’t quite able to touch the big guns from Manchester’s yesterdays. Despite such a unique vision, their tracks laid bare in the open do have the tendency to bleed into one another – sure there’s lovely cohesion – but there’s alaso a lack of subtle flavouring.
When they change tempo, often a breakdown centred around that churchly organ, they have a habit of building to an obvious swell of chiming guitars, chain-gang chants and Roberts’ wolfman horsing holler pitched above it all.
That said, this is early days, and like the obsessives surfing on high at the front, the promise is indisputable – and as We Bros brings things to a messy, magnificent conclusion you’d could be right in thinking that this is the one. 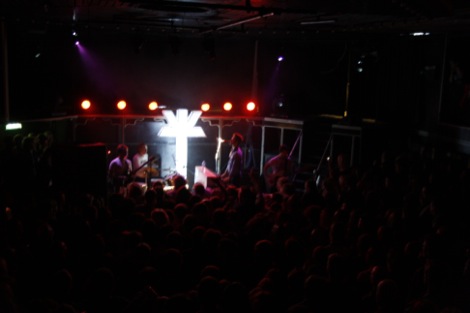 Worshipping at the church of WU.
Pictures courtesy of Tom Lennon.

WU LYF on the Culture Show.