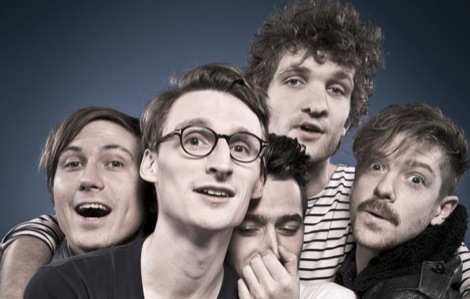 Zulu Winter: We Should Be Swimming
Insistent bass and sweeping, moody yet uplifting surrounds give this all the potential to be massive and not just because cockney quintet Zulu Winter are managed by the team behind The Vaccines.
At first, vocalist Will Daunt sounds disconcertingly like Chris Martin but things quickly transform into a Foals-type indie rocker that builds to a storming, chaotic crescendo of Japanese Popstars intensity.
There’s a steady momentum building around this mob, already lined up to play events in Tokyo and Texas as well as the NME Awards in London over the next couple of months but believe the hype – these could go far.

Diagrams: Tall Buildings
After a brief but worryingly Flying Pickets-esque harmonied opening, this first single from debut album Black Light swiftly transforms into a real head-bobber, the dinky guitar riffs and bass hooks building to a pleasantly arpeggiated chorus that you’ll happily let reverberate around your noggin. Well worth catching at Static Gallery on March 16 if you can.

Natalie McCool: Fortune
LIPA graduate Natalie’s haunting Kate Bush (ish) vocals and self-styled ‘panoramic pop’ has already won rave reviews and got her signed to Grammy Award winning producer Steve Levine‘s Hubris Records and this latest offering can only fan the flames of her burgeoning reputation.
She’s already jammed one-on-one with Macca during her time at Mount Street but this latest offering, which has the dark, edgy feel of Shakespeare’s Sister meets Florence And The Machine, shows the Hough Green gal’s not one to rest on her laurels.
She’s supporting Sandi Thom at Threshold Festival at the Picket this weekend (Feb 12) and Joan Armatrading at Manchester’s Bridgewater Hall on November 4 – check her out.

Dog Is Dead: Two Devils
There’s a hint of The Pixies in this delicately beautiful number, telling the tale of a twisted relationship that’s circling the drain.
The Nottingham quintet cameo’d as themselves in knocking-shop drama Skins last year but this shows depth way beyond what hormonal teens who’ll have gegged onto them since then would be expecting. Bombay Bicycle Club remix is worth a listen too.

Crash & Burn feat. Natalie Storm: Hint
From the pseudo air-raid warning horns at the start through to the state-of-the-nation lyrics, this ragga-dancehall mash-up is clearly a party tune trying to make a point.
Not entirely sure what that might be but it’s just about salvaged by the phat-arsed bass that kicks in just as attention’s starting to wane.

Rams’ Pocket Radio: 1 + 2
Crashing guitars and melodic chords make it clear why these will be supporting Snow Patrol on tour over the next couple of months. 1 + 2 is an EP choc-full of the kind of slightly over-earnest ballads that’ll tick the box for those who’ll be packing out arenas for their fix of emo-rock – lighters/mobiles at the ready…

Conformist: Savages Go Modern
Probably the wierdest thing I’ve listened to since Aphex Twin‘s Richard D. James album. There’s a couple of nicely washed-out guitar riffs in amongst the maelstrom of other layered sounds but while the lone vocal beseeches throughout for you to “Shut up and dance”, you’ll have your work cut out.