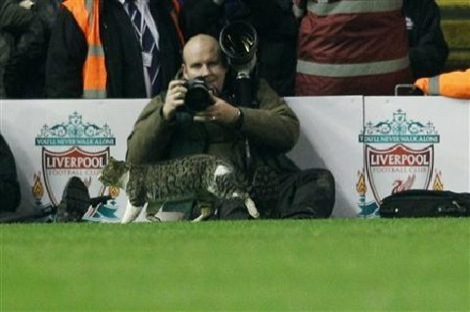 The cat which brought Liverpool and Tottenham’s Premier League football match to a standstill after wandering onto the pitch at Anfield has inspired a new pop tune.
The grey and white tabby has became an internet hit with at least two spoof Twitter accounts with the ‘official’ the Anfield Cat, @AnfieldCat, attracting almost 35,000 followers.
The cat, which warmed up on the touchline at Anfield as Liverpool played at home against Spurs, strolled past Liverpool manager Kenny Dalglish before wandering around Tottenham’s penalty area for a few seconds near goalkeeper Brad Friedel.
But yesterday the cat was revealed to be nameless and living wild in the run-down streets around the Liverpool ground.
Anyways, here’s Vom Vorton’s Anfield Cat-inspired pop gem.