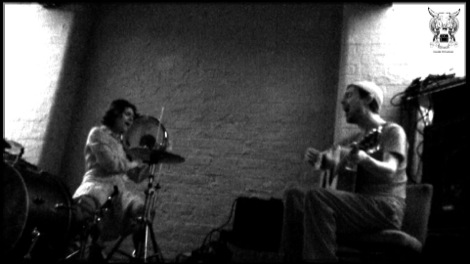 A night of sonic eclectica headed up by French psych-prog collective Vialka presents Getintothis’ Mandarin Lionheart with their perfect antidote to Valentines Day.

It seemed this year it was even harder to escape Valentine’s Day, due to tacky businesses grabbing for our last penny, a vain attempt to share the love in a truly bleak outlook for 2012 or simply a sign of the apocalypse.
But Wolstenholme Creative Space provided a great alternative to the usual depressing evening when you realise you simply cannot afford to love anyone…
Instead we were treated to a whole host of acts ranging spoken word to ear splitting noise rock.
Opening was a decidedly unromantic set from Mango Shank, a youngblood duo with a variety of charity shop instruments strewn across the floor.
It’s hard to make sense of Mango Shank because on one hand it seemed like a couple of bored musicians playing random notes, shouting incoherently, and generally being completely out of sync with each other, and it can indeed be very boring to hear this. 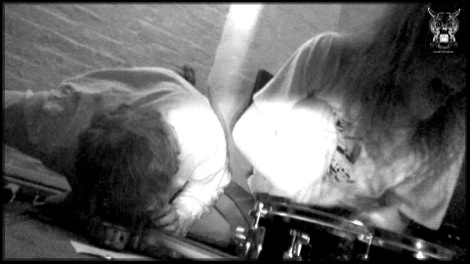 Mango Shank
But, on the other hand, in this day and age it’s rare to see these kinds of performances, altogether devoid of caring what the audience thinks.
Dadaist performances have been done almost a century before, but there’s something still very intriguing to see, even if you just aren’t into it, so Mango Shank should definitely be commended and encouraged to perform more – if only to add variety to otherwise, all to often, safe billings at gigs.
Up next was, poet Mark Greenwood accompanied by Jon Davies on cello. Aside from the odd misstep here and there, this improv collaboration, working outside their usual Eyes outfit, went down a treat, and after this, their first outing, let’s hope they collaborate again in the near future.

To carry on the spoken word proceedings was Paul Tarpey, best known for presenting PMTV for the postmusic collective.
An incredibly entertaining raconteur, even if he doesn’t seem like he welcomes any form of spotlight, Tarpey’s stories are absurd in a way that can only come from Merseyside told with a deadpan drawl. 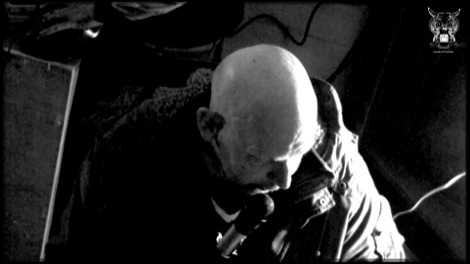 Tarpey
Added to the oddness of the performance was a subtle soundtracking by AMERiCANS with kitsch horror piano fiddlings that seamlessly fused the end of Tarpey’s set with the noise duo’s beginning.
AMERiCANS feature two of Stig Noise Sound System, and aren’t too far off their parent band’s sound. Major differences include less Fall-esque post punk gyrations, more grindcore influence, and a heavy use of casiotone distortions.
It’s good stuff, their set improvised and varied throughout, but not too chaotic thanks to looping riffs, the urge to just play a good beat and let people enjoy the riffing, culminating in Jake Stig‘s equipment going haywire for drummer Trippy to improvise over til the end of the set. 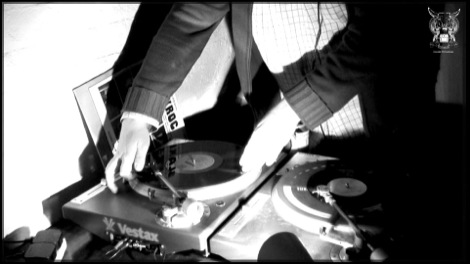 DJ Toy
Headliners Vialka were a totally different kettle of fish to the previous performance; much more intimate, dextrous and well worked, the French-Canadian two piece were a delight in euro-folk gone math rock.
Having drawn comparisons to Gogol Bordello, Getintothis hadn’t high hopes, but it was far, far away from gypsy gimmickry – there are definitely hints of Django Reinhardt in the guitar lines, the lead singer Marylise has inflections of Edith Piaf, but it’s actually the surprising post-hardcore turns in the rhythm that really make them stand out from bland global pop you’d hear on Jools Holland.
On top of their musical diversity was a performance that was electrifying, even if they were using an acoustic guitar and brushes on drums Vialka somehow managed to make their music as heavy as AMERiCANS, in a different way, by shifting dynamic and volume at the turn of a beat.
These days it’s hard to have faith in finding truly exciting outside of the US and UK, save for a number of African and Middle-Eastern electro groups, world music has been pushed into the daytime café soundtrack, but Vialka are anything but. A lovingly crafted, perfect non-Valentines day treat.
Listen to Vialka.
Main image Vialka. Pictures courtesy of Stig Jacobia and the POSTMUSIC crew. Stills by Fave Muslim taken from PMtv.