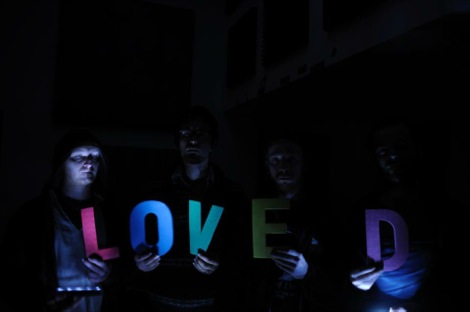 From the remnants of schizo-pop acrobats Seal Cub Clubbing Club comes Loved Ones, a group based around lead singer Nik Glover and Richard Hurst from brutal psych-rockers The Laze.
By all means this is a more intimate affair than both of their previous projects, lending itself to subtle changes throughout songs, progressive and organic songwriting and a strong focus on melody.
Flashes of chamber pop from the New York scene drift in and out (think Grizzly Bear, The National or Dirty Projectors‘ more quiet moments) as well as the subdued melancholy of Wild Beasts. Loved Ones are another example of a Liverpool band looking outward for influences, and are tipped by many, including Getintothis for a great 2012 and beyond.
Still a relatively new band, Loved Ones, have only publicly released a handful of tracks via Souncloud, one being All Your Cry, but the track with the most attention is their lead single Are You Hiding Out In Hell, which perfectly captured the sweet and bitterness of their songcraft.
Opening with a fluttering West-African inspired guitar riff, the song then departs towards a more electronic driven chord progression allowing Glover‘s soft falsetto croon over the decaying keyboard fuzz and rolling drum beats.

When you compare the writing to SCCC, you can tell there is a conscious direction that is more thought out, less reliant on eccentricities, all in all more mature.
Glover tells Getintothis: ‘Loved Ones is different people, so the styles are different. The idea was always to make something more folkish, and based around ideas of family and local legend.‘
Glover is grateful for the nomination, and well aware of their slight discography compared to the other nominees.
‘It’s still extremely early days for us, we’ve only released one single, so it’s great to be nominated for the award on the basis of so little output.‘
The band, which also contains Jay Freeman of Mother Earth and Ben Shooter are planning a full-length release by the end of this year titled The Merry Monarch.

With such pedigree and experience in the Liverpool scene, Glover has seen bands come and go but believes that the berth of acts we have now is stronger than ever.
‘I’m always raving about the so-called new kids, because there’s so much that is brilliant going on.
‘There’s more enthusiasm for groundbreaking ways of making and enjoying music now than at any time since I started doing it.‘
The innovative shows we’ve been seeing included everisland‘s Thirteen night which included Loved Ones being warmly received by the crowd, performing with a number of the city’s breaking acts.
The only way is up for the band; they’ll no doubt welcome in more fans as their profile grows with every release and show.

Loved Ones‘ debut record The Merry Monarch is out later this year.
Follow Getintothis on Twitter for more GIT Award updates.