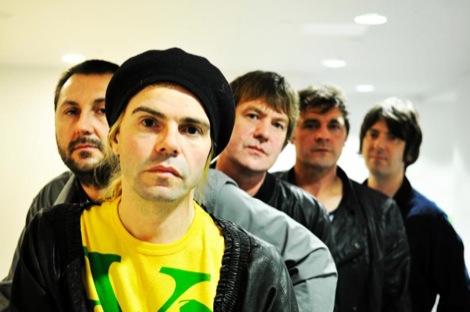 The Charlatans mark the 15th Anniversary of Tellin Stories with a run through their crossover album but as Getintothis’ Luke Traynor reports it’s their wealth of tunes and enduring energy which marks them out as more than also-rans from the much-maligned mid-90s.

IT’S a grand old time for fans of the fondly-remembered Madchester scene.
With the Stone Roses, Happy Mondays, New Order and Inspiral Carpets all dusting down their guitars, 2012 is swiftly becoming musical manna from heaven for discerning northern gig-goers in their 30s.
The Charlatans, while hailing from the Midlands and Cheshire, have always found a spiritual empathy with the northwest, having based their initial early 90s groove on the dance-orientated rhythms of the time.
It’s been 15 years since the release of Tellin’ Stories, the album that brought the band to the attention of the mainstream and it’s as good a reason as any for The Charlatans to get out on the road.
Vocalist Tim Burgess emerges onto the Apollo stage sporting a questionable blonde mushroom-style barnet which is not standing the test of time. But if the coiffe is stuck in the past, the band bursting into the album’s opening track Walking In No Shoes sounds unmistakably fresh.

Fans have been promised the full version of Tellin’ Stories so there’s no surprises thrust upon us during the first hour, apart from a couple of interjected B-sides like Clean Up Kid.
North Country Boy and the eponymous track go down a storm, but it’s the unleashing of One To Another that truly sees the belly of the theatre erupt. This is the Charlatans‘ Cigarettes and Alcohol, as the front 20 rows of the room implode with riotous, dangerous abandon.

But let’s be clear, Burgess and co had the blueprint for this brand of brash, attitude-driven indie comfortably before Noel Gallagher unleashed Definitely Maybe upon us and Liam mimicked Burgess‘ hand-behind-back stooped forward delivery to take it for his own.
The Northwich man’s vocals are impressive, strong and strident, never once needing his colleagues to bandaid any wilting higher notes, a fact pointedly demonstrated by a confident performance on the bare arrangement of the honestly-plaintive You’re A Big Girl Now.

Energy levels, however, are suitably upped for How High, The Charlatans‘ most incendiary live standard, this three-minute exorcet causing carnage across the Apollo.
‘I’ll be down when you’re down, I’ll be up when you’re up‘, vows Burgess, as the crowd-surfing begins again in earnest.
‘It’s a big one,’ he reflects proudly after the final guitar chord is laid down. That’s the understatement of the night.
The evening’s second half begins with a full-frontal assault into the hypnotic sounds of Forever (taken from Us and Us Only) which is a definite candidate for song of the night with its hypnotic lilts giving way to intoxicating piano-led bluesy grooves.

It’s at this point when the breadth of The Charlatans‘ material is brought to mind. With 11 albums to choose from something has to remain locked away, and so the forward-thinking songs from LPs Wonderland and Up At The Lake stay in the box, which is a shame as Burgess’ falsetto on Judas, Wake Up and If I Fall should be brought to a wider audience.
The final 30 minutes is, however, packed with old-skool Charlatans. The band’s signature hammond organ takes centre stage with Weirdo and recalls a time when this band were more dance-infused before the indie anthemic demands of the 90s held sway.
Here Comes A Soul Saver keeps the night’s ingredients suitable traditional, while there’s no denying the addictive feel-good vibe delivered by such favourites as Just When You’re Thinking Things Over and The Only One I Know.

While some bands revisit their long buried back catalogue with little relish, Burgess basks in this trip down memory lane, standing arms aloft centre stage almost messiah-like, calling for reciprocal joy from the now thrashing moshpit den. The excited smile on his face shows he’d gladly swap places with any of those saluting him below.
With the running time nearing two hours, it’s time for Sproston Green, the eight-minute swashbuckler which sends their legion of fans off happy into the night.
The Charlatans may have been going for 22 years, but with live shows this impressive, there is no need to be throwing in the towel any time soon.