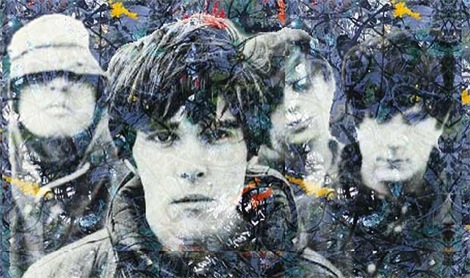 What the world’s been waiting for – the third coming of The Stone Roses happens this weekend at Manchester’s Heaton Park. Getintothis delivers our top 10.

Regular readers of Getintothis will be well versed about how The Stone Roses brought about a lifetime love of music.
Now, arguably the greatest band these shores have ever produced are back this weekend, playing three shows at Heaton Park – three shows which became the fastest selling rock gigs in UK history – with all 220,000 tickets selling out in just 68 minutes.
Ahead of their hotly-anticipated return, we dug out our complete Roses collection, poured over the artwork, liner notes and imagery – and came up with our top 10 tracks (subject to change!). This is the one… 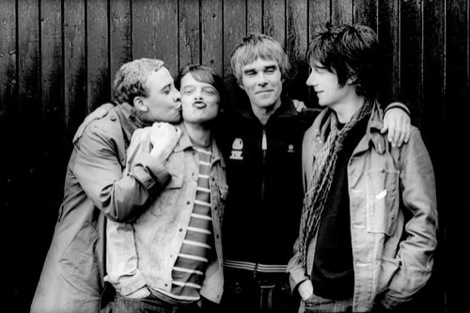 1. I Am The Resurrection (Stone Roses)
Their crowning glory, the fusion of four of the greatest players of British rock music melding a chemistry so special it’s pure gold dust.
Three and half minutes of perfect pop underscored by lyrical bite and coded spiritual metaphor before five minutes of genius musicianship is unleashed showcasing each of the band’s devastating ability; John Squire‘s effortless fluidity around the fretboard, Mani‘s tribal swaggering bass line thrust surging deep into your belly and Reni‘s lightning liquid-sword attack around the kit. A true wonder of modern rock music.
Hats off too, to the man who set the controls to the heart of the sun – John Leckie – the key to capturing all those distant whistles, roars, whiskers of brilliant light and shade, guitar-neck scratches, drumkit rattles – it’s all there.
Eight minutes 13 seconds which changed dancefloors around the world forever.

2. Elephant Stone (Turns Into Stone)
Quite possibly the best intro of all time (I’ll repeat that line later!). A glistening crystalline shoot of light married to Reni‘s hi-hat groove before Squire delivers his Byrds-like jangle.
No song sounds more like summer than this…

3. Mersey Paradise (Turns Into Stone)
…Or perhaps this sounds more like summer… Another slice of effortless cool with my favourite Ian Brown set of lyrics:
‘As I stare an oil can comes, sailing by and I feel like, growing fins and falling in, with the bricks the bikes the rusty tin, I swim along without a care, I’m eating sand when I need air, you can bet your life I’ll meet a pike who’ll wolf me down for tea tonight…‘
You can bet your life, every Scouser at Heaton Park will be singing their heart out to this one and changing that lyric ‘River cool’s where I belong,‘ to something a little closer to home.

4. Sally Cinnamon (non-album single)
The early seeds are sown with this cute slice of salacious peach of pop heaven. From Squire‘s distinctive searing guitar lines to Reni‘s relentless funk strut and back to Brownie’s devilishly sexual lyrical undertones this is the Roses finding their stride in glorious, yet almost naive, fashion. Timeless.

5. She Bangs The Drums (Stone Roses)
Like Lennon and McCartney or Morrissey and Marr, Squire and Brown‘s knack for penning the perfect pop song was delicious. And this classic is top of the pile.
Yet, like Led Zep‘s John Paul Jones, it was bass player Mani providing that secret special ingredient.
That distinctive rubbery intro run is the signal for a million and more heads going off big time during three minutes of sonic euphoria.
Just make sure you’re out of ear shot when the beer-fuelled masses try and reach the ‘way I feeeeel,’ high notes. Ouch.

6. Breaking Into Heaven (The Second Coming)
After five years in the wilderness, it takes an audacious band to return with an eleven minute marathon. That said groove resembles nothing in their back catalogue and opens with four and half minutes of swamp-drenched jungle-aping cacophony is a masterstroke bordering on career insanity.
Few could pull it off, many critics left the party disillusioned – only the fans knew the Roses had netted a stone cold beast of a record. Years later The Second Coming has been completely re-evaluated in most circles as the great, if arrogantly expansive, record, it truly is – and in Breaking Into Heaven it has the majestic opener.
Vast oceans of rhythmic clout, colossal Jimmy Page guitar riffs and more lyrical swagger than Liam Gallagher at a hall of mirrors convention.
How’s this for announcing your return on the scene: ‘Heavens gates won’t hold me, I’ll saw those suckers down. Laughing loud at your locks when they hit the ground. Every icon in every town, hear this your numbers up – I’m coming round.‘

7. Fools Gold (Turns Into Stone)
The funny thing about Fools Gold is that it’s almost impossible to detach it from a legion of Cressa imitators jiving like mullered chimps in the last chance saloon. It is to daft dancing what Wonderwall is to crap buskers.
Yet heard in the right context – preferably on headphones while taking a stroll – it retains all that effervescent majesty imbued with enough avant-garde loose Can-isms (think Ege Bamyasi circa ’72), that it’s impossible to marvel at what a rare treat it is.
Take a listen again to those last two minutes which are essentially Reni‘s rollicking off drum rolls amid a plethora of unfathomable noises, echoes and looped guitar shudders and then try to think of a band in recent times that’s had the bravery to lash out a 12″ single of equal merit. A rarity, indeed.

8. Ten Storey Love Song (The Second Coming)
People forget that there were numerous moments of straight-up pop gems on The Second Coming; Tightrope had that camp fire charm, How Do You Sleep was so effortless it almost seemed throwaway while Your Star Will Shine was a stripped back beauty.
Best of all was Ten Storey Love Song – a towering singalong as life-affirming as they come.

9. I Wanna Be Adored (Stone Roses)
Quite possibly the finest opening to any record, ever (did I say that earlier?). That industrial rumble, twinned to Mani‘s unforgettable bass line, is Northern England captured in a moment. And when John’s glistening guitar shatters the dusky darkness with spears of light the effect is alarming and stunning – marking the arrival of something quite incredible.
What follows is a rock n roll hymn of naked intent and inspirational self-belief. Adored? And the rest.

10. Going Down (Turns Into Stone)
Silvertone compilation Turns Into Stone is littered with classics, Something’s Burning has that whacked out, mind-altering groove, Standing Here has the distinctive blues hooks with deft melodic craft while Where Angels Play really comes into it’s own when they tear it up live.
Yet it’s another classic ditty showcasing Brown‘s foxy wordplay playing footsie with Squire‘s hazy come-to-bed melodies which completes our top ten picks.
Going Down is delightfully simple, catchy as hell and with lyrics likes these – ‘passion looks like a painting, Jackson Pollock’s Number Five, come into the forest and taste the trees, the sun starts shining and I’m hard to please, ding a ding ding ding I’m going down…‘ – it’s impossible not to smile and enjoy the party…
‘I’ll live until I die.’

While we we’re on the Top 10 front, we couldn’t pass up the opportunity to ask the band’s official biographer, superfan and first ever GIT Award host, John Robb for his Top 10 Stone Roses.
Here’s John’s response:
1. Something’s Burning – ‘Krautrock meets Miles Davis bringing the voodoo down meets funk groove.‘
2. Made Of Stone – ‘For THAT chorus.‘
3. This iS The One – ‘Pure euphoria.‘
4. Fools Gold (live 2012) – ‘For the 15 minute groove on the end.‘
5. I Wanna Be Adored – ‘Their oldest song and that bass intro!‘
6. I Am Ressurection – ‘Blissful.‘
7. Don’t Stop (live) – ‘Ian Brown singing backwards!’ Trippy
8. Tell Me – ‘Punky energy from early Roses.‘
9. Love Spreads – ‘Dark slide blues plus great lyrics.‘
10. Breaking Into Heaven – ‘Total control of the rhythm section – as loose as it gets.‘