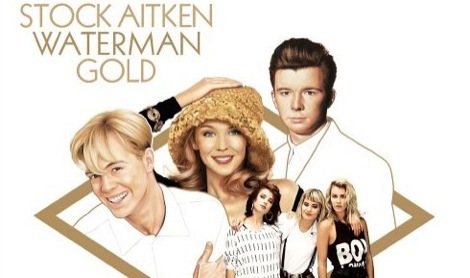 Stock. Aitken. Waterman. Three words more likely to induce raging apoplexy among right-thinking music fans the world over you would be hard pushed to find.

Mike Stock, Matt Aitken, and Pete Waterman were rubbish, or so goes the received wisdom. The triple-headed personification of everything that was wrong with the 1980s.

Received wisdom is wrong. SAW may have made some dreadful rubbish in that curate’s egg of a decade but they also made some of the most perfect pop music you are ever likely to hear.

Among the pop gems spewed out by their hits factory was Mel and Kim‘s FLM album – the only LP made by the duo before Mel’s tragic death from cancer, Kylie‘s I Should Be So Lucky and Bananarama‘s True Confessions containing the smash hit Venus – all bona fide classics.

The trio’s very own Roadblock, which the dance music mafia, then obsessed with something known as Rare Groove, slavered over after SAW had issued it as an ultra-trendy white label 12″ without their names attached, then there’s Princess‘ Say I’m Your Number One and Rick Astley‘s Never Gonna Give You Up… I could go on.

That Mel and Kim LP aside – which may have dated badly with its skittering Linn drums and sequencers yet is still full of solid gold pop classics – they never were albums artists, but why should that be an issue?

Fact is, in this country we are embarrassed by pop music. The odd exception such as ABBA aside, we make it better than anyone in the world and enjoying simple lyrics and good tunes should not be anything to be ashamed of.

We celebrate pasty-faced white boys with guitars as if they are the new Beatles if they come up with anything resembling a tune but if it’s produced by a smiley-faced popster singing about ‘loving you forever and a day‘ they are castigated.

Lyrically it’s hardly Bob Dylan but so what? Singing nonsense lyrics that just happen to stick in your head never did Oasis any harm. And I love the Stone Roses as much as the next man but, plucking a lyric at random, what exactly does ‘let me put you in the picture let me show you what I mean, the messiah is my sister, ain’t no king man she’s my queen‘ mean?

Come on. Do yourself a favour. Listen to SAW with fresh ears and admit it: They were more than respectable.

Forget Can’t Get You Out Of My Head and Spinning Around, this 1990 number two marked the first reinvention of La Minogue’s glorious career.

Pure pop at its timeless finest, it united all ages like no SAW release before it and featured a simply wondrous picture of our heroine wearing a feather boa on the front cover.

The debut single from the Appleby sisters who, were it not for the tragic death from cancer of younger sister Mel in 1990 at the age of 24, would almost certainly have had a long career at the top.

They enjoyed four straight top 10 hits but Showing Out, unpretentious, bright and full of life, is the original and still the best.

This eight-minute promo only version of her debut single – also known as Mandy’s Theme – quickly became a Balearic classic in the year before Acid House hit. There’s no way you would recognise it as a SAW record.

4. Bananarama: Love in the First Degree

The Bananas were headed for the dumper when SAW took them over and re-invented them with tunes such as Venus, I Heard A Rumour and this 1988 belter.

Siobhan Fahey seemingly wasn’t impressed and soon departed to form Shakespeare’s Sister but what did she know? This is a billion times better than Stay will ever be.

5. Rick Astley: Never Gonna Give You Up

Fact one: Warrington’s Rick Astley used to check into hotels under the name ‘Dick Spatsley‘, given to him by 1980s pop bible Smash Hits.

Fact two: He admitted in the same magazine that the first song he ever wrote was called ‘A ruddy big pig came down our street‘, a fact the mag forever more reminded readers of every time his name was mentioned.

Fact three: Although Never Gonna Give You Up is obvious, dated, and its appeal has doubtless been a little diminished by being played at every 80s night since 1990, it is still more than deserving of a place in this top 5.