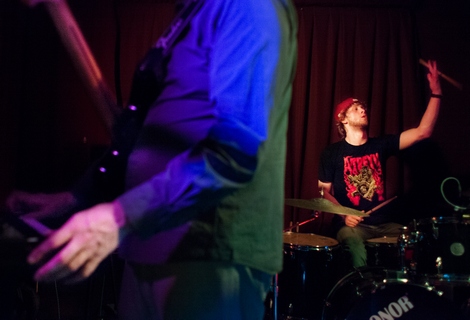 Arriving at Mello Mello, Kusanagi had just taken to the stage and over the respectably sized crowd, their deft math-rock/post-rock sound made a great first impression.
Kusanagi are a new band on the Liverpool scene, having played just five gigs prior to tonight. However, relative inexperience was not translated into a mediocre show.
Taking influences from 65daysofstatic, Mogwai and Explosions in the Sky, the three piece’s intricate, instrumental set was impressive and engaging, particularly so when it emerged afterwards that the drummer had no monitor.
They’re looking to gig as much as possible in the next few months and are definitely one to watch. 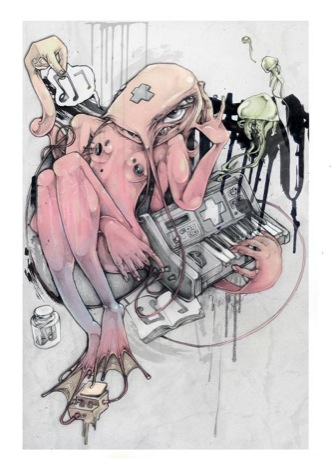 Alright the Captain’s supercool sci-fi prints
This Derby-based trio were next up on stage. Growing in stature and with their excellent debut album, SNIB, out now, Alright the Captain combine heavy, metal-edged riffs with sweet indie touches in an unpredictable and inventive mix.
Playing awesome walls of noise, with more guitar pedals than you can shake a stick at, their technical virtuosity simply dazzles. So good in fact, we venture back after their set to the merch stand to buy a t-shirt. Hopefully we’ll see them playing in Liverpool again soon.

Tonight’s headliner are Merseyside music-spectrum-bending supremos, Fonetiks.
Having not seen them since their awesome gig at the Kazimier a few months previously, playing the Giant Spectacular after-party with a set that perhaps baffled, but impressed the French crew.
Tonight, the band doesn’t disappoint either. With spacey, expansive layers, deconstructed guitars, syncopated drums and echoing vocals, the trio weaves a complex net to cast over the audience and bring us into their world.
With psychedelic visuals backing the performance, they play with dark, industrial sounds, heavy distortion and warped loops in a set, which is consistently fascinating.