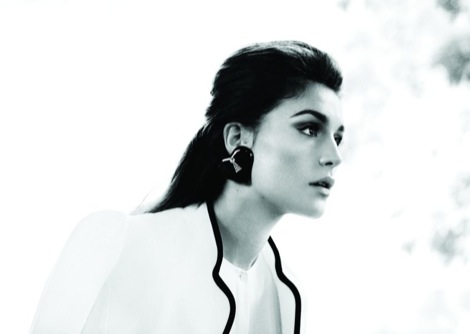 Jessie Ware is a woman that can do no wrong, Getintothis’ Stephanie Heneghan reveals her girl crush.

There were just a few reasons why Getintothis was keen to talk to Jessie Ware.
A top 5 album. A Mercury Prize nomination. Unanimous acclaim from the blogs to the broadsheets. A host of hip collaborations. Stellar live performances. Oh, and my biggest girl crush of the year…
Yup, when the call came though, it was a pretty easy decision to accept a chat with 27-year-old Ms Ware. Sure, I can squeeze her into my busy schedule…
You see for me, the memory of 2012 will be summoned up by 110% – a lush laidback dubby slice of pop with a husky vocal that has provided the soundtrack to the past few months activities; a single that was heavily championed by Annie Mac, as well as every blogger with a working set of ears. And my mum – she really likes it too.

After about the 1000th listen, I realised the vocal seemed familiar (and no, not just from the repetition), and with a bit of digging we discovered where I’d heard it before – on SBTRKT‘s Right Thing To Do, which coincidentally was my big summer song of 2011. Spooky, eh?
And the possessor of those vocal chords? The aforementioned Miss Jessie Ware, a woman who is definitely having a bit of a moment right now.
After lending support to SBTRKT, dueting with Sampha – on the gorgeous Valentine – and being backing singer on Jack Penate‘s tour, it’s time for her to step into the spotlight.
With her debut Devotion hitting top five in its first week and even the critical naysayers being won over by a mixing pot of soulful pop, electro, RnB; with that all important voice holding centre stage, Jessie told us her album “combines all the things I love, it just felt right to do it like that“.
She added: “Soul music really inspired me – that’s what I grew up listening to in my house, and I love people like Aretha Franklin, Stevie Wonder and Dusty Springfield. But what inspired this record was people like Sade and Prince and Grace Jones – it had more of an electronic edge to it rather than straight soul singers.”

The writing process was a case of trial and error, she says, until the title track was born and it all fell into place.
She said: “It was definitely me trying out things and saying no, that didn’t feel right. Then when I wrote Devotion with (The Invisible‘s) Dave Okumu that’s when it made sense and it really kicked into gear.”
Also kicking it into gear were house DJ/producer Julio Bashmore, and Kid Harpoon who worked on Florence and the Machine‘s recent album, Ceremonials.
Not a production involving a cast of thousands, but as Jessie explains keeping it as a tight ship was important to her, “the people that I worked well with are the ones that I wanted to carry on working with“, which is a philosophy she plans to continue on her upcoming tour.
In addition there’s influence from SBTRKT, enthusing about working with him on Right Thing To Do.
“It was really cool! I had a really good time with him,” she said. “I love that I’m on his album because I think it’s such a great album and he helped me get started really.”

And while Devotion demonstrates a more melodic sound than the be-masked one is associated with, he is responsible for helping to hone the finest instrument on there.
Ware added: “He taught me a lot about how to use my voice recording wise because I hadn’t had as much experience of that yet and show the subtleties when I sang soft.”
When pressed to name her favourite tracks off the album (surely the Sophie’s Choice of artists?) she opts for “Devotion, Sweet Talk and I really love Running” but quickly adds, “that’s only at the moment, it changes!”
And favourite ever track by any artist? “that’s easy, Chaka Khan – Feel for you“. Can’t really argue with that one.

Delving further into the album, as someone who has tried – and failed miserably – to compose lyrics (hasn’t everyone had a bottle of wine and thought they could rattle off a bestseller?), I’m always curious where writing influences come from.
At first listen Wildest Moments appears to be a standard love song but with the knowledge that Ware wrote it about her relationship with your best friend, it becomes more powerful.
She said: “I think I’m just inspired by moments – whether it’s a discussion you’ve had with a friend or something happened that’s significant that’s been playing on your mind – I think that’s the best way for me to write, in the here and now.
“I’m feeling quite good because it is being well received so I’m chuffed because I’m glad people get what I’m trying to do. Now people are really starting to relate to songs, it’s just amazing – I can’t wait to play live with people who have bought the album in the audience and looking forward to hearing their favourite song.”
Ahh yes, the tour.
Having already played a number of intimate dates, Jessie is heading off on a jaunt around UK and Ireland, with a number of the venues already declaring they’ve sold out – unscrupulous scalpers must be filled with eBay glee.

But what of the transition from being back up singer to holding a show on your own, surely this must be a daunting prospect?
Ware said: “It was a case of me just working it out – I loved being a backing singer and getting the chance to be a solo singer was slightly daunting but its just about working with the right people and making sure I feel comfortable in my own skin.
“The show itself will be about honouring the record but I’ll throw some extra songs in there too – I want it to sound really exciting and fresh and for people to appreciate what my band are doing. I like to push it a bit when I’m live.
“There’s so many different people that I admire onstage – from Beyonce to Florence to D’Angelo, Grace Jones – they’ve all got some thing different and I’m just trying to find where I’m most comfortable really.”
How about an alter ego – an on stage persona that allows you to step out of your comfort zone? Beyonce has Sasha Fierce, Florence has also admitted it’s a technique she employs.
While Jessie hasn’t quite got around to giving hers a name yet, it is something that she thinks about, using clothes as a confidence prop. She said: “With my outfits it does make me feel more powerful and like I’m ready to DO THIS, so I try and make an effort there as it puts me in the mindset to perform.”
Taking a minute to focus on the clothes – yes it’s a girly topic but lets face it, women’s clothes are a lot more interesting than men’s – style wise Jessie has that kind of effortlessly cool looks that everyone wants but no one can quite pull off.
Pairing crisp white shirts with statement earrings and rocking a D&G aubergine dress in the video for 110% (“it made me feel like Sophia Loren“) – expect to see her on various best dressed lists over the next year.
Does she have a stylist? Yes. Does the stylist tell her what to wear? No. “I work with a girl who is a really good friend of mine,” she said.
“And she knew exactly what I wanted to do – I just said to her “this is what I want to look like” and she just helped me find the clothes to do it.”
And those oversized earrings that me and my friends are all coveting, she must have a pretty decent collection now?
“They’re lent to me for photoshoots, I want them too but I always have to give them back!” I suggest maybe slipping them into her pocket at the end of a shoot but she just laughs, obviously a great deal more trustworthy than myself.

In an attempt to dissuade the conversation away from petty larceny, we discuss what she’s looking forward to over the next 12 months.
Festivals loomed large for her this month, with a stand out set at Bestival followed by another cracker at Festival No 6 and she’s keen to do more festivals next year.
There’s also the opportunity to cast the net further, she said: “Playing in Europe and going travelling a bit and just seeing people that like the music… so far I’ve been playing live and people haven’t always known the songs so it’ll be a very different experience.”
And finally – if you had to sum up the past year in one sentence?
“Really exciting, very overwhelmed by it all but very happy.”
Jessie Ware. Fabulous voice, a top 10 album, kick ass clobber, and access to massive earrings. My girl crush continues.
Jessie Ware plays Manchester’s Sound Control on November 8 and her single Night Light is out on October 22. She also plays the Mercury Prize party on Wednesday September 26.
Jessie Ware